Thoughts: Alfred Hitchcock's masterpiece of suspense, Rear Window is about L. B. "Jeff" Jeffries, a photographer that broke his leg in an accident and is now confined to his apartment room for the next several weeks. To past the time, Jeff watches the people in his neighborhood and, in doing so, discover that one of his neighbors is conducting some usual activity, and a mystery ensues.
Rear Window is a one of the few films that has influenced me as a film critic. Although it never "change what I believed" or anything like that, Rear Window did show me the power of suspense and how important of a narrative device suspense is. Ever since watching Rear Window almost two years ago, the suspense thriller genre has been one of my favorites, particularly anything made by the great Alfred Hitchcock. If you have any interest in filmmaking, critiquing, acting, or just want to see a quality movie, I employ you to watch Rear Window. While the movie may start slow by today's standards, it turns into one of the most edge-of-your-seat suspense works of all-time. I have yet to see a film that matches Rear Window in terms of quality suspense and intelligent mystery.

Note: The trailer below is misleading and contains some spoilers. Just watch the movie.

Plot: The following plot summery is copied from Wikipedia.com.
Note: I have less than the usual amount of the description plot because this is a Spence mystery and any spoilers could ruin the movie. If you are sure ,from I have said above, that you want to watch the movie do not read below so that you will not know what is going to happen in the movie.
After breaking his leg during a dangerous assignment, professional photographer L. B. "Jeff" Jeffries (James Stewart) is confined in his Greenwich Village apartment, using a wheelchair while he recuperates. His rear window looks out onto a small courtyard and several other apartments. During a summer heat wave, he passes the time by watching his neighbors, who keep their windows open to stay cool. The tenants he can see include a dancer, a lonely woman he nicknames "Miss Lonelyheart", a songwriter, several married couples, and Lars Thorwald (Raymond Burr), a wholesale jewelry salesman with a bedridden wife.
After Thorwald makes repeated late-night trips carrying his sample case, Jeff notices that Thorwald's wife is gone and sees Thorwald cleaning a large knife and handsaw. Later, Thorwald ties a large packing crate with heavy rope and has moving men haul it away. Jeff discusses these observations with his wealthy socialite girlfriend Lisa Fremont (Grace Kelly) and his insurance company home-care nurse Stella (Thelma Ritter), and becomes obsessed with their theory that Thorwald murdered his wife. Watch the movie to see what happens next.


Plot: 10/10- Even though Rear Window's mystery is not necessarily the best mystery, the way in which the mystery and story are told is masterful. Hitchcock uses a unique perspective to tell the story. For nearly the entire film, the movies takes place from the one room that Jeff is in. Because of the unique perspective, the audience is along for the ride with Jeff and the audience only knows what Jeff knows about the mystery, therefore the viewer is easily wrapped up in the suspense and story. Rear Window does start slowly, which is the only minor compliant, but that was not an issue for me.

Acting: 9.7/10- James Stewart is reliably excellent as Stewart always is, although he seemed particularly Oscar Worthy in this performance. Grace Kelly is beautifully amazing in her role, and for the time, she is one of the best heroines of cinema, despite her smaller role. The other actors in the film where all very good.

Soundtrack: N/A- Rear Window only uses a true soundtrack in the opening and closing title. The rest of the music in the film comes from the surroundings, like someone playing the piano or playing a record.

Would I Watch This Again: Oddly enough, I have yet to watch the film more than once, however I would like to change that in the near future.

Overall: 9.7/10- Overall, Rear Window is a masterpiece of cinema, the best work of the era, and my personal favorite Alfred Hitchcock film, in short, watch Rear Window!

Closing comments: Even if you are not a fan of old classic films, Rear Window is a must watch if you have any interest in movies. 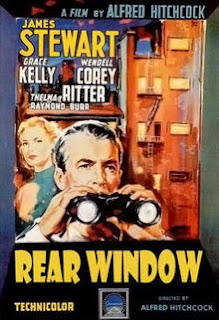 
If you want to contact us or have any please sent an e-mail to johnstarslayer@gmail.com.