Doctor Who returns with a new Doctor, Peter Capaldi, but does the premiere meet our lofty expectations? 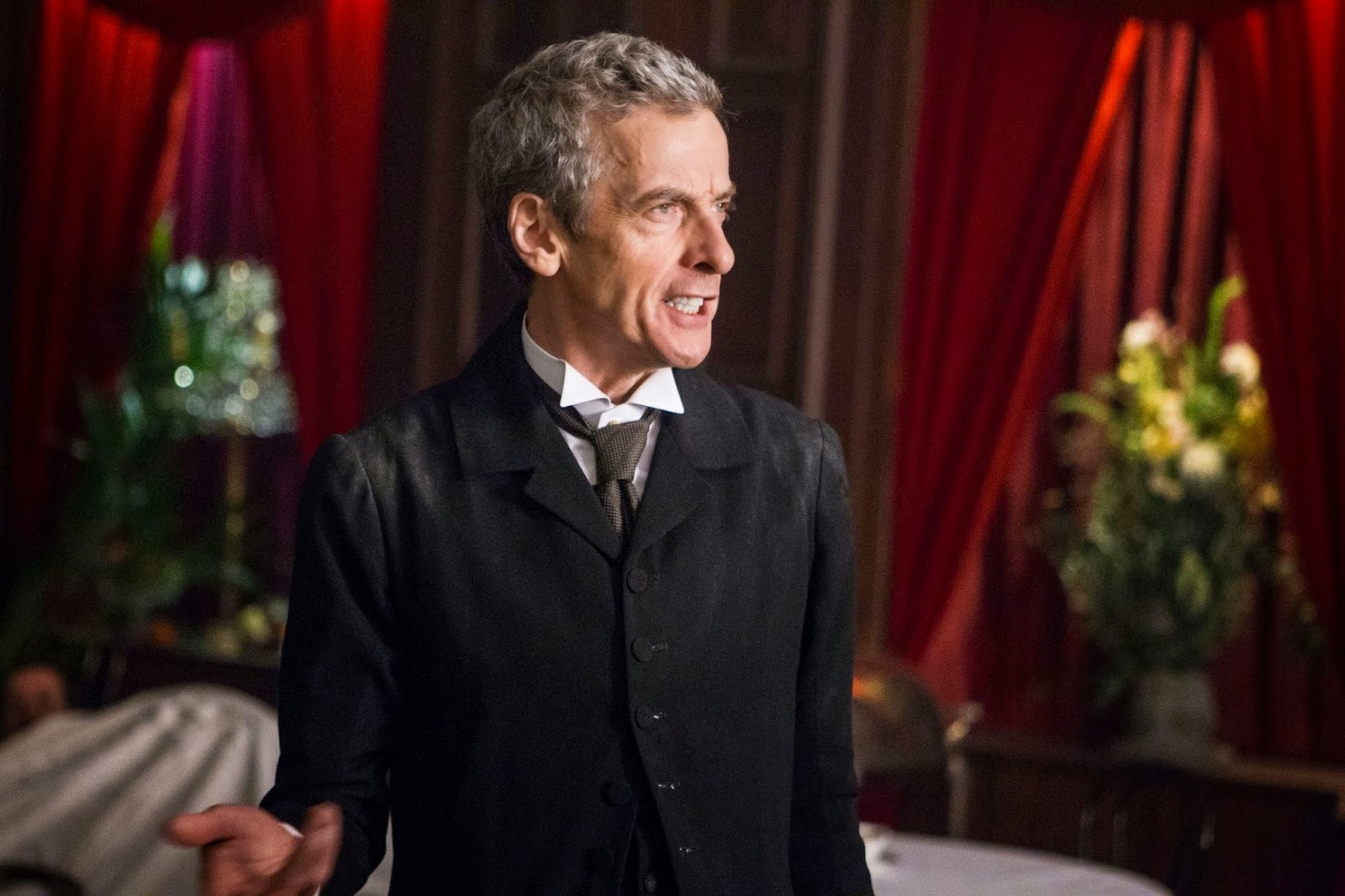 If, for whatever reason, you have yet to see the episode, this review will contain a few very mild spoilers in the beginning, and there will be spoiler warnings for anything major. Granted, there is really not much to spoil in the first place.

The episode, "Deep Breath," opens in Victorian England where a massive T-Rex appears in the middle of London where the threesome of Madame Vastra, Jenny Flint, and Strax are at the scene with some futuristic tech to stop the beast. Then, the T-Rex coughs up a blue box, and outcomes the Doctor, albeit extremely confused and somewhat amnesiatic. Like his incredibly brief appearance in "The Time of the Doctor," Peter Capaldi is mantic, and it takes the first Act of the episode before he comes back to anything that resembles his senses, not that it is a bad thing. Assuming that most viewers have seen the episode, I shall not discuss exact plot details much further.

For the majority of the episode, it is entirely hit or miss. Capaldi himself is rather good being able to play both the mantic and confused Doctor, as well as the cranky old man. For the record, I am a full supporter of Capaldi as the Doctor and for an older Doctor, and I have to say that his scenes are undoubtedly the best part of the episode. His later interactions with Clara are a lot fun with Capaldi's Doctor being a bit of a jerk, in the best way possible.

Capaldi's scene in the alleyway as he realizes that he sounds Scottish and that is face is vaguely familiar somehow is the first scene where Capaldi gets to shine in a few fun and humorous way. For those not in the know, Peter Capaldi appeared in David Tennant's run, in the episode "The Fires of Pompeii," as the man that the Doctor saved from the volcano, so the Doctor recognizing his face is a rather humorous callback for the fans. During the aforementioned scene, Capaldi is finally able to actor more like the Doctor with his senses about him to a degree, and that is when the episode picks up the pace with more of the wacky adventure and problem solving that we have come to expect from Doctor Who.

Before moving to the main bulk of the episode, I need to discuss where the episode ultimately faltered...

EVERYTHING NOT INVOLVING THE DOCTOR!
A large portion of the episode (around a third) centered around Vastra, Flint, and Strax, which is an unfortunate shortcoming. Even before hearing that Vastra would be a part of the season premiere, one of my main hopes for the new season is that it would distant itself from the previous few seasons with no River Song or Vastra, and this episode has furthered proven my point that Vastra and her crew should be out. Most of the scenes involving the Paternoster Gang played out like a retarded sitcom with dumb jokes, corny dialogue, and general stupidity. Come on Moffat, you are better than this! The banter in Sherlock is witty, clever, and funny, while this was just dumb and painful to watch. The only very slight positive of these scenes is Clara trying to reconcile with the Doctor being different. Even though Eleven thought he would be the last Regeneration, the Doctor should consider giving all of his companions a crash course on Time Lord regeneration for future reference.

Moving back to the plot spoilers, after a mysterious ad in the paper about "The Impossible Girl," aka Clara's title, the Doctor and Clara meet at a peculiar restaurant. After some humorous dialogue exchange, the actual plot kicks into overdrive with a reintroduction of sorts to the Clockwork Droids from one of my favorite episodes, The Girl in the Fireplace, which I reviewed here,but instead, it is the S.S. Madame de Pompadour's sister ship, the S.S. Marie Antoinette. Humorously, the Doctor cannot seem to remember where he has seen something like this before. Unfortunately, these new Clockwork Droids are nowhere as creepy as the original ones. Even though Doctor Who is not known for its action, the final showdown with Clockwork Droids could have at least been a little more intense, granted, who actually gives a lizard's tail about the Paternoster Gang anyway? 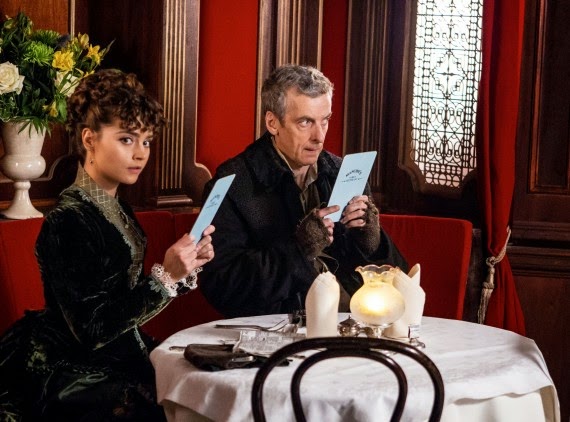 The Doctor's conversation with the head Clockwork Droid was very well done, particularly Capaldi's performance. However, we still do not have much of a sense of what this new Doctor is going to be like, since some scenes were almost Matt Smith like with the fast dialogue, while others had a darker Eccleston vibe. He also does not have a definitive catchphrase yet either. While none of these are actual problems yet, the previous Doctors were able to define themselves by the end of their first episodes, so we can hope that Capaldi will distinguish himself from the other Doctors in the next few episodes. Despite these small problems with the Doctor, Capaldi has shown some true promise, and he has made me optimistic about the future of his run.
Towards the end where the Doctor leaves Clara for a time and then finally returns, the Doctor gives an excellent speech about he is not Clara's "boyfriend," and that there will be no flirting, which is a great idea since the last few Doctors have been the opposite in many ways. Ending on a high note, Matt Smith's Doctor calls Clara on the phone with a surprise cameo to reassure her that the current old man is still the Doctor that she knew.

To cap things off, we are introduced to a crazy woman, who claims to be the Doctor's girlfriend. Who is she? I have no bloody idea. Here's to hoping that we will end the season with another "Save the Galaxy" because of some behind the scenes villain.

Visually, "Deep Breath" had a more film quality aesthetic with improved lighting and use of shadows. The special effects, while still mediocre at times, are improved as well. Also, the new opening sequence, which was inspired by a fan-made opening, is fantastic! It is quite a lot different than past incarnations with steampunk like clockwork throughout.

Overall: 6.8/10- Despite Capaldi's strong presence as the new Doctor, "Deep Breath" is a disappointingly generic beginning for the new Doctor rife with unfortunately dumb and dull dialogue for the supporting cast. That being said, the visual and thematic direction Capaldi's Doctor is taking gives me hope that we are in for a great season, even if this first episode was held back by lackluster writing.

Please be sure to comment with your thoughts of the episode, and check back tomorrow for my review of the Lego Movie.

Posted by James the Reviewer at 8:16 AM