Here is the review for the awesome new Desolation of Smaug trailer, and JT is back to offer his opinion as well in our usual rundown of trailers with HD screen caps. Wow, this trailer is amazing compared to all of the other trailers for either Hobbit film. The tone is darker and more epic, plus there will apparently be a few epic battles. Again the Elves are back, which is arguably just as much a good thing as it is bad. On one hand Elves are cool and Legolas is a fan-favorite, on the other the hand Elves could overshadow the other characters like Bilbo, Gandalf, and Thorin. However, I will give Peter Jackson the benefit of the doubt because he has done well so far. Now there is even more controversy over the addition of Tauriel's character now that she is obvious going to be a romantic interest for Legolas, as well as being an entirely new character not from Tolkien's lore. This change is somewhat similar to giving Arwen a larger role in the Lord of Rings, except Arwen was actually mentioned in the book. The original rumor is that Tauriel was going to be a romantic interest for Kíli or one of the other Dwarves, however that is either going to not happen or there will be some crazy awkward "love triangle" between the character, which I hope is not the case. Now, Benedict Cumberbatch as Smaug sounds awesome! At first I could hardly tell it was Cumberbatch but after listening to it more, his distinct voice was clearly present. Also I really like the part when Bilbo starts to tell Gandalf what he could in the cave, and Gandalf is like "Good, you'll need it." For some reason the inflection in his voice reminded me more of his role as Magneto than Gandalf but it was still cool. As for my anticipation for the movie as a whole, I cannot wait to see it because I am certain it will be better than the first.

JT: By the looks of this trailer, Peter Jackson and crew would rather have us believe Tolkien wrote a story called Elves: The Forgotten Action Heroes (with cameos by New Zealand, A wandering crazy man and a troop of height-challenged guys with beards and huge appetites). But really, kidding aside, this is a very strong trailer for an action epic. If I had no clue what the story was, I would probably go see this movie and like it. However, since I am me and I do know what it's about, I have the usual purist reservations, although to a lesser degree than for the slapstick fumble that was the first one.
Things that are cool: All those random action scenes (basically the whole trailer)! Bilbo! Gandalf! Bard! Beorn! Smaug!
Things that are not cool: Eyebrow shots. Eyebrows that are not the same color as the hair above it; come on, people it's creepy to look at. romance, implied, assumed, imagined, or real. The Hobbit is not the sort of story that likes that kind of thing. Inventing characters, then telling us there would be no romance, then implying that there is, for no reason. Overdone Legolas beatdowns. Yes, it's going to be fun on the big screen, but believe it, shield- and elephant-trunk surfing have denied Orlando Bloom any future credibility as an action star, even in the same role. 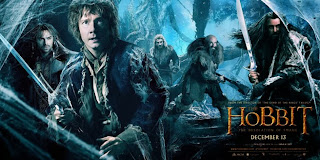 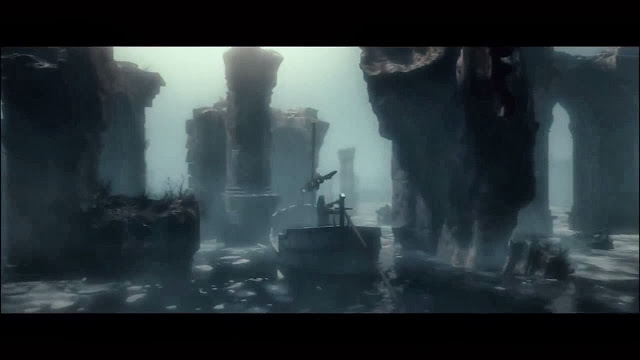 JT: There is confusion on whether this Lake-Town, Dale, or Dol Goldur. For my part the question is who's in the boat and I doubt that Dol Goldur has that much water. 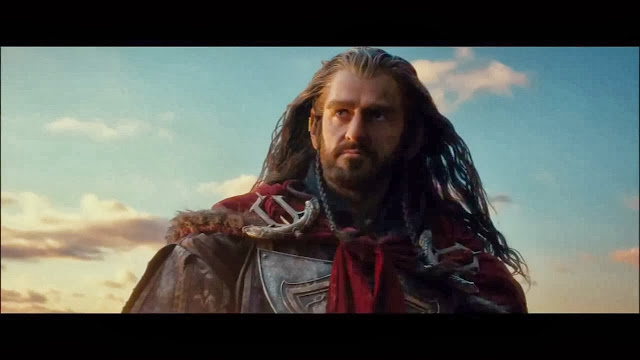 James: For some reason I really like Thorin's armor, it looks awesome with the red cape/cloak thing.
JT: I expect a suitably epic Howard Shore theme to accompany this shot. 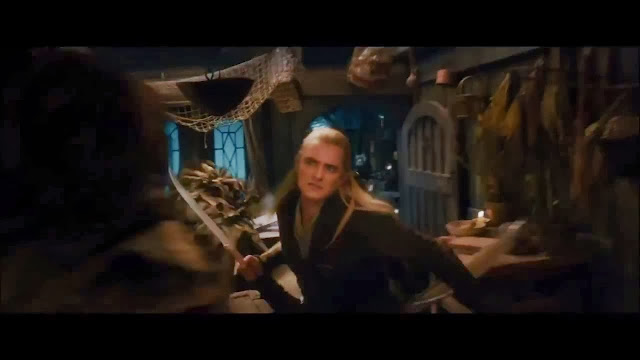 James: Even more Legolas killing things, did someone forget that he is not the star of the film? Oh wait, he basically is.
JT: That's the problem right there. And no, he will never live down the surfing on the elephant trunk and the shield. Welcome to Legolas Lives: The action movie that should not be. 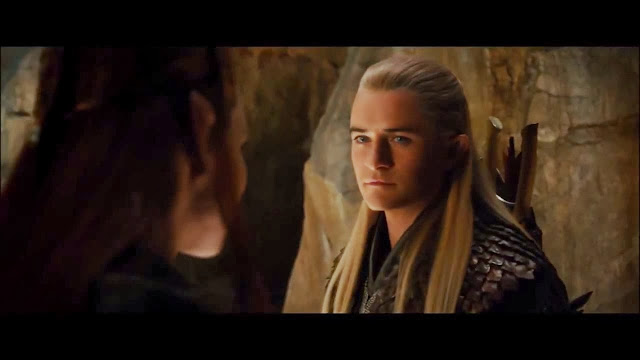 James: Other than the obvious fact that Tauriel is not mentioned by Legolas in the Lord of Rings, I wonder what dark secret she has that makes it so that Thranduil does not want her to give Legolas false hope.
JT: Can't help you there. The whole being an invented character business is really messing her up. The speculation is that she's simply not worthy to be making googly-eyes at the prince of Mirkwood. 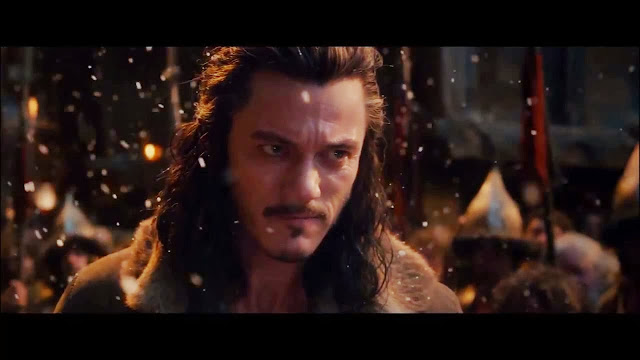 James: Luke Evans as Bard the Bowman looks like he is a cool character, albeit one that still looks like the Pirates of the Caribbean version of Orlando Bloom.
JT: Did I tell you Bard is awesome? Even in his limited role, he's one of my favorite characters. 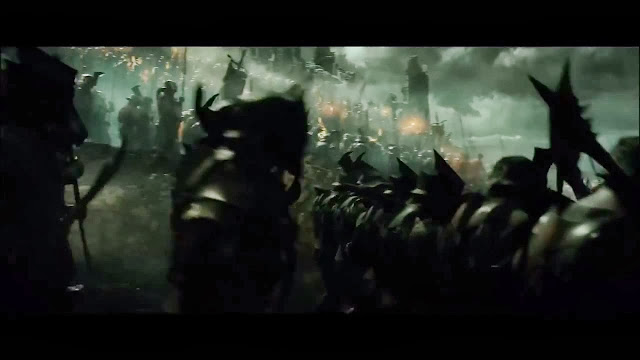 James: An army of darkness approaches, hopefully the battles in this and third film will be on par with that of the Lord of the Rings because the world needs an epic fantasy battle.
JT: You can have your movie-centric opinion (no offense intended) but actually, making this battle terribly big might just be annoying, since it's primarily just a throw-in to make the move three hours long. 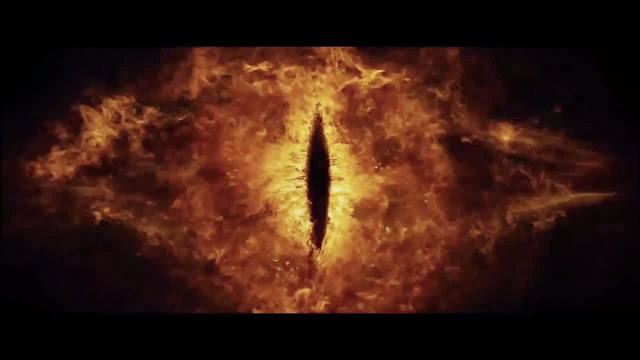 James: This is literally one of those blink-and-you-will-miss-it type shots with the Eye of Sauron.
JT: What in Middle-Earth is the flaming eyeball doing in the Hobbit movie? Blatant cross-references are not cool. To whom it may concern, the main Hobbit story has nothing whatsoever to do with Sauron, except that Gandalf engineered the quest in order to rob Sauron of the ability to destroy the north with a mind-controlled dragon. 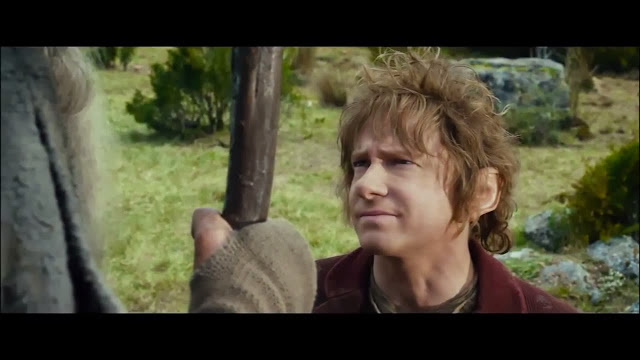 James: This scene has the type of humor that I like opposed to the slapstick kind that was a little overbearing in the first Hobbit film.
JT: Exactly my thoughts. And if Bilbo's line is "I found it" or words to that effect, this one of those key moments that's dropped in to make the fans cheer. In the story Bilbo claimed he had simply found it w/o mentioning Gollum until much later. But Gandalf knew he was lying and began to suspect that he had the master ring on him. 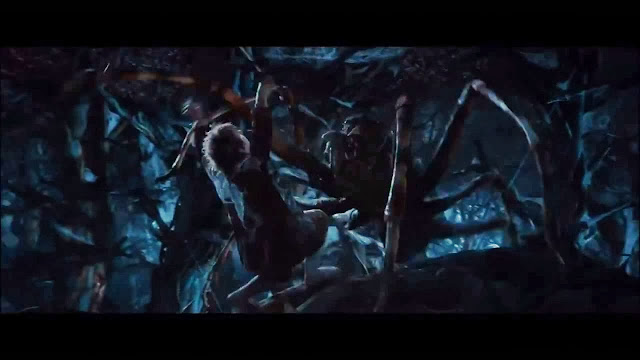 James: I hope no one has arachnophobia because there are going to be even more creepy spiders in the Hobbit than the Lord of the Rings. Plus, they actually look more anatomically than the Shelob from the Return of the King in that Shelob was more of a wasp hybrid wit the stinger on the tail.
JT: Bilbo is supposed to be invisible! This scene is great b/c of the image you get from imagining a bunch enormous spiders chasing a floating sword. 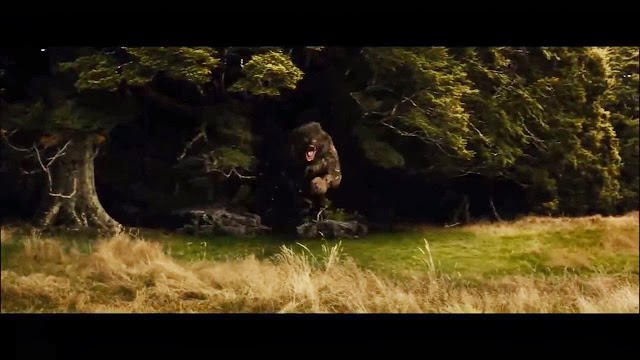 James: I have no idea what that thing is, but it looks cool.
JT: Well, James, should I explain or not? Most of the readers probably know anyway. 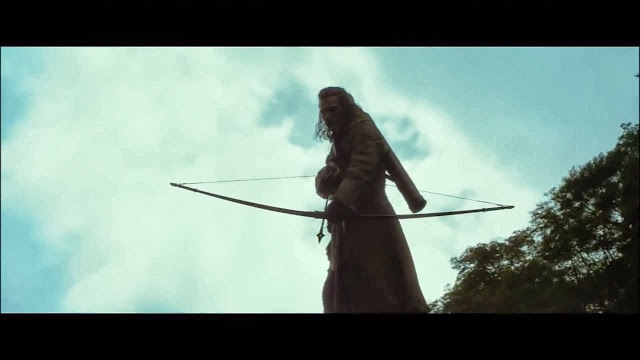 James: The Bard actually has his Bow in this shot. I hope he is as cool as character as he looks. 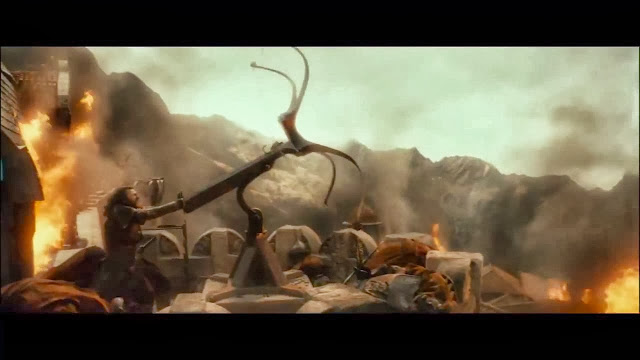 James: This battle looks like it is going to be epic!
JT: It will also be three minutes or less, because this is a flashback. 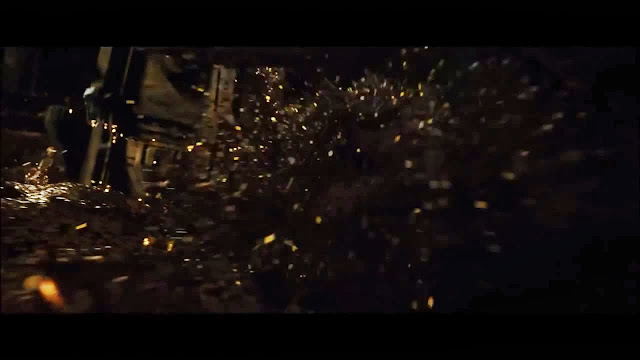 JT: Not a great picture of the hoard under the mountain, although it does convey the sense that it's far bigger. 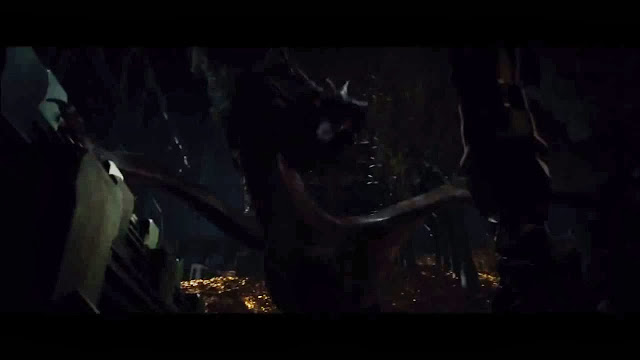 JT: Smaug's head! And he's red. Not what I hoped for but I'm sure it will look great. Is this because he was drawn in red on the map? 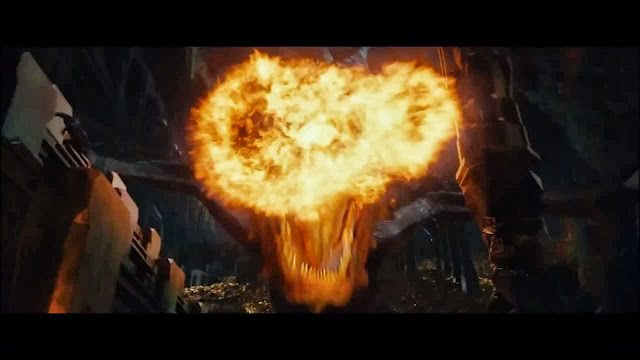 James: This is the closet thing we have to a good look at "CumberSmaug," hopefully the future will continue to be this obscure so when he is revealed in the movie in full, it will make for a better effect.
JT: Fear not! The future is only two months long!

What did you think of the trailer? Please comment below.

Posted by James the Reviewer at 8:43 AM