Agents of SHIELD: The Asset Review

Thoughts: Agents of SHIELD does it again with an even better episode than before. Despite the criticism, I have to say that Agents of SHIELD continues to impress as we gain further insight into the characters' backstories. Also The Asset is the first episode of the series to be based on actual comic book source material, which I will go into more detail about later in the review.
*Spoilers*
The episode opens with some mildly impressive special effects with the cars flipping and the transfer truck being lifted in the air. Scientist Dr. Franklin Hall is captured by unknown enemy force using Gravitonium. In the comics Doctor Hall was a scientist that worked with Gravitonium and in an accident he gained the power to control gravity itself and fought the Avengers and SHIELD. While his origin a sizeable departure from the comics, the story was adapted well enough and considering that Graviton is a B-List villain, Agents of SHIELD is the best place for the character. Seeing him reach out of the Gravitonium orb was cool, albeit not unexpected since I knew about the comics. Also, you may have seen the character in the animated Avengers: Earth's Mightiest Heroes in one of the early episodes.
Clark Greg had even more fantastic scenes in this episode, although he did not mention "Tahiti. It's a magical place" this time. His decision to kill Doctor Hall when there were no other alternatives was a great, and surprising, twist that shows that Coulson will do what needs to be done when necessary. 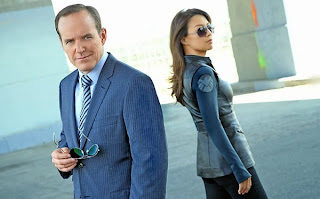 More information into Agent Grant and Skye's backgrounds were given this episode, and as usual for Whedon characters, they have troubled and conflicted pasts. Grant was bullied by his older brother and Skye was an orphan. Chloe Bennet and Brett Dalton are starting to have great chemistry together. Also I am in the somewhat minority in that I really like Skye as a character. She is actually one of my favorite parts about the series.


Action: Again Agents of SHIELD delivers action better than anything else on network television with well filmed hand-to-hand fights and a few shootouts.

Acting: Everyone is great as usual, except Bennet and Dalton where better than before. Ian Hart as Dr. Hall was alright, not bad, but not the best; he played his role well enough.


Production Value/Special Effects: While the opening scene with the cars flipping and the truck being lifted where obviously CGI, the effects where impressive considering the TV budget. Also the room with the changing gravity was a cool effect.

Comedy: Another hilarious episode with several memorable parts. Skye's humorous witticisms where great, especially the part about the gun and her attempting to say something profound but completely botching it. Fitz had a very funny moment as well.

Overall: 9.2/10- Agents of SHIELD continues its upward progression with another fantastic episode showing the series' slightly darker side.

Closing comments: Hopefully the next several episodes will continue to be even better.

The full episode is below if you have not seen it.

Posted by James the Reviewer at 6:50 AM