Thoughts: Starring Tom Cruise and from the director that brought us the visually stunning Tron: Legacy, comes Oblivion, a sci-fi action thriller that is a surprisingly fun ride. First off, I have to say that the movie looks amazing! Particularly in the beginning of the movie because the special effects where just so great to look at. Joseph Kosinski has to be one of the best visual directors around because, even though Oblivion lacks the human element, the movie has awesome visuals. Something that I do not usually bring up in my reviews is how memorable a movie is, and even though most of this review was written not long after watching the film, two weeks after watching the film, I almost forgot that I ever even watched the movie, which is a not a good sign for a film’s quality. The reason behind the lack memorability is that Oblivion was lacking in characters and it was derivative in story. Despite this, the movie was fun, entertaining, and had fantastic visuals, which saves the movie.

Note: The trailer contains too many spoilers, which is why I did not post it.

Plot: The following plot summary is copied from Wikipedia.com.
In the year 2077, Tech 49 Jack Harper (Tom Cruise) is one of the last drone repairmen stationed on Earth. Jack tells us that the planet was nearly destroyed sixty years ago, during a war against a race of alien invaders known as Scavengers ("Scavs"). The Scavs destroyed the moon, causing massive earthquakes and tsunamis, and then launched their invasion. They were only defeated by the use of nuclear weapons, which left most of the planet irradiated and uninhabitable. The few surviving humans migrated to a large space station called the "Tet," a massive tetrahedral space station that orbits the Earth, which is powered using energy harvested on Earth by giant ocean-borne power stations that generate fusion power from seawater before migration to Titan, one of Saturn's moons. From Tower 49, a base standing above the remains of the northeastern United States, Jack and his partner and lover Victoria "Vika" Olsen (Andrea Riseborough) work as a team to maintain the autonomous drones that defend the power stations from the few remaining Scav bandits. They receive their orders from Sally (Melissa Leo), their mission commander, who is stationed on the Tet. Jack flies recon and repair missions to the surface, while Vika supervises from Tower 49, a home at around 3000 feet (1000 meters) above the sea. The two expect to leave Earth and join the other survivors on the Tet in two weeks. Although Jack and Vika had their memories wiped five years earlier for security reasons, Jack has recurring dreams about meeting a mysterious woman at the Empire State Building before the war - which was before he was born. Jack keeps a secret retreat in a forested area he sometimes visits.
Watch the movie to see what happens next.


Plot: 6.4/10- The first two thirds of Oblivion are just great. The film gives enough time for setup and world building, yet never feels slow or dragging. There are few characters in the film, which actually works in the movie's favor because less characters where left underdeveloped, however only Cruise’s character seemed to have been developed at all. The twist later in the film is quite good and almost a little surprising. The sci-fi world Oblivion is familiar to sci-fi fans like myself, but it does not feel very derivative until the later portion of the film.
Even though the action scene towards the end was great, I just was not into the movie by that point, it really started to lose steam for some reason because I did not care what happened to the characters in the last Act. Although I cannot pinpoint what movies Oblivion's ending is similar to, I felt as though I had seen it before.

Acting: 7.2/10- Despite the lack of actors in the film, Tom Cruise completely carries Oblivion by himself that is not to say however that the other cast members are lacking. Olga Kurylenko was decent in role and Andrea Riseborough was decent in her role. There is another actor that was revealed in the trailer that really should not have been because it is a spoiler, but you know who I am talking about, and of course, he was good, although I felt he was phoning it in.

Special effects: 9.3/10- While not the most impressive in terms of scale, the movie looks amazing. Similar to Joseph Kosinski's previous work on Tron: Legacy, Oblivion is a visual treat. As a sci-fi that loves practical effects, Oblivion uses a surprising amount of practical (or at least I believe those where practical effects, if not, they where amazing digital ones for sure) alongside digital ones for a fantastic combination, especially when watching the movie on Blu-Ray.

Soundtrack: 8.5/10- Similar to how Joseph Kosinski got Daft Punk to compose the score for Tron: Legacy, another French techno band, M83, composed the score of Oblivion and it was great! Several of the tracks reminded me of Tron: Legacy and I wish there were more of them.

Comedy: N/A- Except for one or two jokes, there is not much humor in the film.

Would I Watch This Again: There is nothing in Oblivion that warrants another viewing, unless I happen to catch on TV a several years from now.

Overall: 7.3/10- Overall, despite its derivativeness and weak third Act, Oblivion is a lot of fun for sci-fi fans and worth watching for the visuals alone if you are interested.

Closing comments: Although drawing from other science fiction films, Oblivion is entertaining enough to warrant a rent for sci-fi fans. 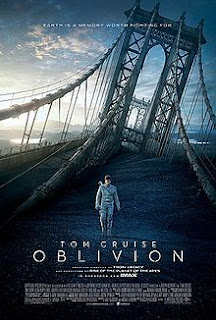 Posted by James the Reviewer at 6:53 AM