Thoughts: Agents of SHIELD continues to improve with yet another top notch quality episode.

*Spoilers*
"Eye Spy" opens with a surprisingly dark and eerie tone that shows that the series can be dark when it needs to be. Plus, the severed hand was a surprising but nice touch (no I am that sick and twisted).
The episode further explores Coulson's background with the main antagonist being his former protégé Akela. Coulson appears to have mellowed out in his later years since Akela appeared to be surprised by how different he is than before, which I will discuss later. Skye remains one of my favorite aspects of the series with her humorous moments and I like that she did not become a trained killer overnight, which is a common cliché. She is clearly learning, albeit slowly, which is more realistic considering that she is a hacker, not a field agent. Agent Grant is another great part of the show and seeing him fill in for Akela was fun and particularly hilarious in one scene. However, I noticed several times where Grant looked at his hands, which would have blown his cover.
My only problem with the series as a whole is that we really need an entire episode to explore the characters of Fitz and Simmons because they are the characters that have lacked in the character development area. Hopefully that problem will be fixed in the near future.
When the team discussed the possibility of someone having telepathy and saying that it is impossible was basically saying that this universe is 100% separate from the X-Men universe and that mutants do not exist to any extent. However, I find stating that telepathy is “unreasonable” is odd considering all of the other crazy things that have happened, although I suppose science or being an alien from another realm is the way to obtain superpowers in this Marvel Universe. As for Akela's cybernetic eye, it was a cool idea. The team being able to develop glasses that mimic the power will come in handy later on, hopefully the writers will not forget that this episode has ever happened.
The biggest revelation of the episode was Akela's comment asking what has happened to Coulson. Obviously, she used her eye to see through Coulson, which would suggest that Coulson is either a Life-Model-Decoy (basically a robot) or that he has also been cybernetically altered, which brings up another question: what will happen when one the team uses the glasses and happens to look in Coulson's direction? Will they see that something is not normal? Also the introduction of cybernetic enhancements will probably play a large role in the upcoming Captain America: The Winter Soldier.
The ending scene was quite humorous with Fitz attempting to cheat at cards against Grant. A Grant/Skye relationship has been apparent from episode one and I think the two do have chemistry.


Action: The battle between May and Akela was great, even if it was brief. Also Grant infiltration of the complex had some great action moments.

Production Value/Special Effects: While the episode did not have as many special effects as previous episodes, which is probably a good thing, the production value is continually getting better with each episode.

Comedy: As stated above, there are several memorable and humorous scenes in the episode.

Overall: 9.3/10- "Eye Spy" again improved upon the pervious episodes with better chemistry between the actors as well as a hint about what really happened to Coulson. 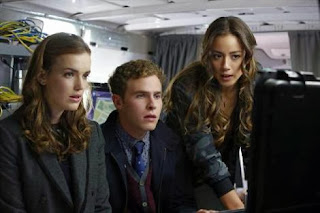 Posted by James the Reviewer at 6:34 AM