Thoughts: Agents of S.H.I.E.L.D. does it again with another fun episode that fixes a few problems I had with the first episode as well as providing some great character development and team building. After the rather polarizing response to last week's pilot, with some viewers and critics, like myself, loving the episode and others being disappointed, Agents of SHIELD has created a large rift between the haters and the fans. As for episode two, despite the smaller scale than last week, it was a lot of fun and arguably better than the pilot. My biggest problem with last week's episode was the cheap looking lighting, which made everything have a low budget TV feel more so than it would have otherwise, however "0-8-4" corrected that for the most part with better darker lighting. Clark Gregg was hilarious and likeable as always as Coulson and the team finally started to work together and build as a team, which was good to see.
*Spoilers Ahead*
The episode opens with the "0-8-4" alert that was mentioned in the last episode, so the team travels to South American. While the Aztec (or was it Mayan) temple looked cheap, the rest of the sets where much better. Getting to hear about some of Coulson's backstory was great as well with him talking to his old flame hinting that Coulson was a "James Bond" of sorts in his younger years. My biggest problem with this episode is that Coulson made a stupid mistake by allowing the members of the army roam free on the SHIELD jet with their guns. Other than that, the episode had great. I liked the camera work in some scenes with the team bickering and the camera spinning around them in typical Whedon fashion. In some ways the episode actually reminded me of Firefly in the way the characters interacted, which was great to see. Melinda May had one of the best lines of the show after the rest of the team would not stop talking, "You talk too much" which was hilarious! Although "0-8-4" is not as loaded with references as the previous episode, there some great ones to Captain American, HYDRA, and the Tesseract, which are cool since the show is continuing to show its importance to the Marvel Universe. There was one minor reference to Serenity when Agent Grant used a Tesseract staff thing that he hit the ground with to knockout the bad guys, which looked a lot like the one Simon used in the opening of Serenity. While I am glad that things are not necessarily as they seem with Skype being revealed to be a double-agent, the fact she is already questioning her loyalty kind of defeats the purpose of it. However, the absolute best part of the entire has to be the freaking Nick Fury cameo! I cannot believe Samuel L. Jackson made an appearance on the show because he is such a high profile actor, but I am glad he did. Him shouting to Coulson that he is “downgrading your a** to a Winnebago” if he screws up the jet again was priceless!
*End Spoilers*

Action: "0-8-4" was more action-packed than the first episode, which was fun. Although I wish more of the actually being hit by bullets was shown, the chase and other hand-to-hand fights where choreographed very well.
Acting: Everyone seemed to work better this episode and the actors for Fitz and Simmons where more memorable as separate people than last week. Of course Clark Gregg was great as always.


Production Value/Special Effects: While the temple looked a little corny, the effects where more subdued than last week, which is probably a good thing.

Soundtrack: Again, the score was fantastic, I cannot wait to get my hands on the OST. If anyone knows how I find it, please let me know.

Comedy: Overall, the episode was not as humorous as the first, however there where plenty of laugh-out-loud moments throughout.

Closing comments: *Spoiler* I still cannot get out how awesome it was to see Sam L. in the episode, he cameo was reason enough alone to watch it! *End Spoiler* 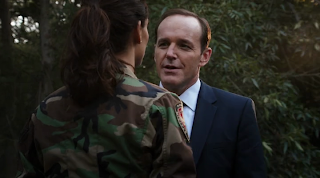 Posted by James the Reviewer at 7:32 AM