Doctor Who: Robot of Sherwood Review

The Doctor meets Robin Hood in a swashbuckling and fun episode titled "Robot of Sherwood."
*Spoilers Ahead* 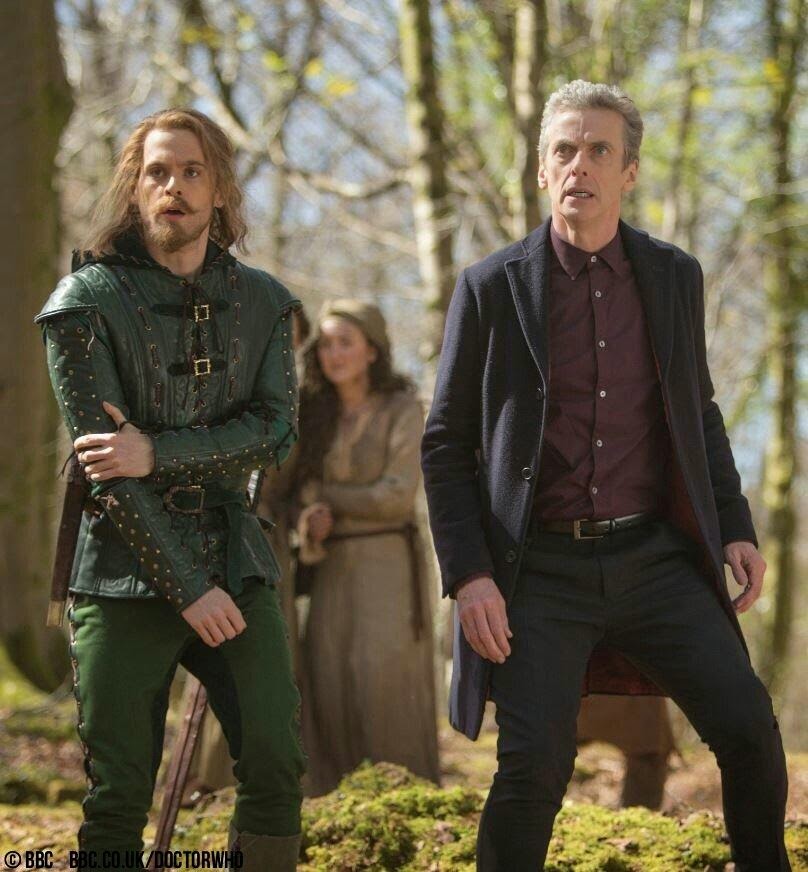 Since there are multiple robots, why is the episode not titled "Robots of Sherwood?" Regardless, we get our first comedic episode of the season with Peter Capaldi getting to show his sense of humor, which, thus far, is quite good.

After the Doctor lets Clara decide where to go next in the TARDIS, the duo head to Sherwood forest to meet Robin Hood. However, the Doctor is certain that Robin Hood cannot exist and thus an adventure begins when Clara and the Doctor actually meet Robin Hood. From Errol Flynn to Kevin Costner, I have always enjoyed Robin Hood adaptations (Flynn is the best!), and Tom Riley's version of Robin Hood definitely invokes Flynn's sense of lighthearted fun.

Compared to the decidedly darker tone of the previous episodes, "Robot of Sherwood" strikes a fun and adventurous tone from the onset with the Doctor dueling Robin with a spoon no less. While a darker tone is good, there is nothing wrong with a little fun adventure before we enter the darkness. Every season needs one or two episodes that lean more in the comedic direction, and "Robot of Sherwood" certainly filled the void. This episode had a ton of hilarious dialogue and shouting matches.

Despite the fun adventure and hilarious comedy, "Robot of Sherwood" had some glaring plot issues. While there is nothing wrong with a simple plot, when there is such a simple plot, the execution needs to be a little better, and that is unfortunately not the case for "Robot of Sherwood." It is somewhat of a generic Doctor Who story with robots crashing on earth and trying to repair their ship so that they can go where ever they are trying to go. What seemed particularly corny is the end when the Doctor, Clara, and Robin shoot the golden arrow at the robot's spaceship so that it can leave orbit did not make a lot of sense. Supposedly, contact with gold, even on the outside of the spaceship, gives it the boost it requires, yet that seems incredibly convenient and corny. Also, defeating the robots with the reflecting plates makes sense, but at the same time, it has been done a million times.

Moving back to the positives, another funny aspect of Capaldi's Doctor that is becoming clear is that he absolutely HATES being wrong, which is why he was so upset and grumpy throughout the episode. Capaldi's Doctor and Clara continue to combat each other with humorous and witty dialogue, with Clara having even more lovable charm than usual.

Thankfully, Missy is missing from the episode. However, it seems that the "The Promised Land" is a real place, which obviously has something to do with Missy.

Towards the end of the episode, Robin Hood and the Doctor briefly discuss legends and what it means to be a hero, and how similar both the Doctor and Robin Hood are in terms of being legends, which turns out to be an interesting conversation. Also, whether or not Robin is a robot of some kind is never clearly explained, but I do believe that he is supposed to be flesh and blood.

One last thing, am I the only one intrigued by how cool and old fashioned the Doctor's TARDIS is? It is almost like an old clockwork watch!

Overall 7.9/10- Despite a few illogical plot points and slightly too wacky tone, "Robot of Sherwood" is a funny and adventurous episode that thankfully did not feature Missy!