Doctor Who: Into the Dalek Review

After the semi-disappointing season premiere, the most recent episode, Into the Daleks, picks up the pace with a solid storyline that delivers both a fun and surprisingly compelling new look into the Daleks.
*Spoilers are ahead, so go watch the episode before continuing* 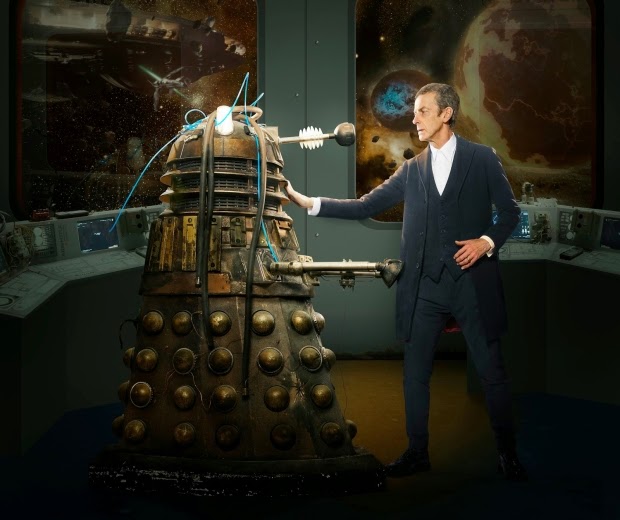 Sometime in the future, humans are fighting a never ending war with the Daleks, and the Doctor swoops in to save Journey Blue, a soldier in the human resistance. After returning Blue to her spaceship, the Doctor is told that the human resistance has captured a live Dalek that is requesting a "doctor." The Dalek is apparently a "good" Dalek since it is exclaiming "All Dalek must be exterminated," (or something to that effect). Now the Doctor, along with Clara and a few soldiers are task with going inside the Dalek to determine why it has "turned."

After barely being defined in his first episode, Capaldi's Doctor gets to show us a little more of what his incarnation is going to be, albeit still lacking the definition that the last three Doctors have had by this point. One moment that has clearly shown how different Capaldi is from others is his reaction to that soldier’s death. The Doctor throws him something for the soldier to ingest when the Dalek antibodies surround him. Of course, almost everyone, myself included, expect the Doctor was doing something clever to save him, but alas the Doctor says that the man was already as good as dead, and the thing he ingested was to find the Dalek's protein stomach thing.

So far, my favorite aspect of Capaldi is his almost narcissistic attitude. If something similar happened to Smith or Tenant's Doctor, they would have been more unsettled, while Capaldi just does not care. In general, it seems that Capaldi does not care nearly as much about other people as the previous Doctors, yet he is doing good for the most part. His relationship and banter with Clara continues to be a highlight with the Doctor continually making fun of her, while she takes a few friendly jabs at him as well.

Favorite line from the episode:
"She's my carer. She cares so I don't have to."

Moving back to the plot, Into the Dalek introduced some intriguing new concepts to one of the Doctor's oldest enemies. The "good" Dalek suffered radiation damage causing its thing that suppresses memories and thoughts that do not include hatred (can't remember the name) to malfunction, thus making the Dalek, who the Doctor dubbed "Rusty," to remember the birth of a star. Seeing the star made the Dalek come to the conclusion that "Resistance is futile," but resistance to what the Doctor asks? Life itself. Intriguingly, the Dalek came to the conclusion that the Dalek quest to destroy life is futile because life will continue on regardless of what the Daleks do, which is one of the more interesting philosophical dilemmas Doctor Who has raised in a while.

After more stuff happens (you know because you presumably watched the episode), the Dalek returns to normal and then the Doctor and company try to make it remember the star again. To further convince it, the Doctor lets the Dalek look into his mind, and after seeing the wonder and life of the universe, the Dalek sees the Doctor’s inner hatred of the Dalek, thus making the Dalek decide that all Dalek must die! The Doctor's remark: “You looked inside me and saw hatred. That’s not a victory.” is another intriguing exploration of his character. Also, the “good” says that the Doctor would make a great Dalek.

On the negative side, the new side characters ranged from unlikable to forgettable with Journey Blue being a little annoying for a lot of the episode. Another negative is "Missy," who apparently teleports certain people right before they die around the Doctor to her place. Right now, I am skeptical about Missy since she seems all too familiar, whereas the rest of the series is gradually heading in a new direction.

Earlier in the episode, we are introduced to Danny Pink, a former soldier and new teacher at the school where Clara works. After a little glimpse of his inner struggle from his time in the war, we get some fun dialogue exchanges between Danny and Clara. After the revelation about how much the Doctor dislikes soldiers, it will be interesting to see how the Doctor reacts or what events eventually make Danny a companion on the TARDIS.

So far, the impression that I get some Capaldi is that his Doctor is completely unfiltered. While the three previous Doctors did show some how much they hated the Daleks or how much they enjoyed being right or even their dislike of soldiers, Capaldi is that like, without the "courtesy filter," and right now, I am really liking it. And it helps that he is Scottish.

Overall 7.9/10- Into the Dalek is a return to form for the series with a fun episode that further defines who Capaldi's Doctor is, as well as expanding upon the Daleks themselves.

Posted by James the Reviewer at 9:10 AM