Avatar: The Last Airbender Book 3 fulfills on everything that the series promised from the beginning with an epic, compelling, and surprisingly emotional conclusion to one of the best fantasy epics of all-time. And yes, I said “of all-time!” 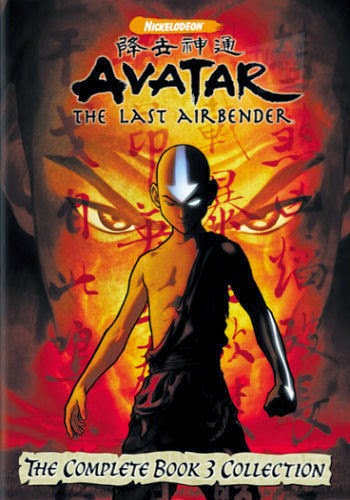 Without spoiling the previous seasons, Book 3 continues the characters' quest to bring balance to the world on their epic journey. What makes Avatar different than most other series is that a storyline that is setup midway through the first season comes to fruition 50+ episodes later in the third season to provide closure to the narrative. Not many eastern TV narratives can do this because they often run until people stop watching. Essentially, Avatar is the television version of classic sagas such as The Lord of the Rings and the Original Star Wars trilogy because the "Chosen One" must stop whatever macguffin is in the world and bring balance to the world, and anytime a series is mentioned in the same sentence as Star Wars and the Lord of the Rings, you know it has to be good. Granted, however, Avatar is obviously not on the same level, but it is certainly magnificent in its own right.
Despite my heavy skepticism about watching a non-anime animated series, Avatar truly lived up to the hype and now I understand why so many people of all ages are fans of this series. Sure, the first season had it downfalls, but seasons two, and now three, are utterly amazing. The themes and the characters come full circle, and the series focuses more on my favorite aspects of the previous seasons.

The Bad: A bit of a deus ex machina ending,

Plot: 9.6/10- After an incredibly strong first episode, the series meanders just a tad with two somewhat pointless episodes, but between episodes two and nine, it is a little more episodic with several fun stories that prepare the characters for their final destiny.

After the halfway mark, the series is more serious and focuses on the setting up the epic conclusion, which it certainly fulfils upon. Thematically the series is rather satisfying, and while at first I was not sure if the series remained consistent with its themes, when considering everything from the beginning of the series, it makes a lot of sense. On the negative side, the series still has an occasional moment that reminds you that this series is intended for a younger audience, but there are less than a handful of times that this happens, so it is not a big problem. One aspect of the end that almost comes out of nowhere, but at the same time, it is vaguely setup in the previous seasons. Ultimately, I was satisfied by the ending, and it goes down as one of the best finales of any story.

Zuko receives a surprising amount of screen time, which most definitely works out for the best. Zuko's character development in the previous season with his inner struggle is brought full circle with a satisfying conclusion, thus making him my favorite character in the series.
Sokka, Katara, Toph, and even Suki are all given development with the intercharacter relationships being fleshed out in very satisfying ways. Aang continues to be one of the more boring aspects of the series, but I finally became attached to the character during Book 3. In addition, the romance aspects of the series are very well executed and seem realistic and compelling.

Iroh is unfortunately not as heavily featured as he was in the previous seasons, but the exploration of the father/son type relationship between him and Zuko carried a shocking amount of emotional weight. In general, the character drama managed to never be overly dramatic with good humor and action spread throughout, but the series ultimately focused on these characters coming together.

As for the antagonists, Azula continues to be as crazy and entertaining as ever, while her "lackies" Ty Lee and Mai are given some development as well. The major villain, Fire Lord Ozai, is villainess and evil, similar to how the Emperor was in Star Wars, which is ironic considering that he is voiced by none other than the Jedi Luke Skywalker himself, Mark Hamill.
Action: 9.3/10- Avatar's expert use of the environment to create exciting action sequences continues to be one of the series' highlights with season three's fight scenes feeling less obligatory and more necessary to the story. The use of military strategy brings an intellectual element to the series' action, along with some large scale battle sequences. The final few episodes in particular feature some of the most intense and satisfying action sequences of the series.

Acting: 8.8/10- Everyone steps up their game in terms of voice acting, even the background character actors. Dante Basco as Zuko turned out to be the standout of the series with his performance adding more weight to his character's struggle. Due to the unfortunate passing of Mako Iwamatsu, who voiced Iroh, Greg Baldwin replaced him in the role, and while he did a fine job at imitating Mako, the difference is still noticeable. Fun fact, tennis legend Serena Williams voiced a small part in the series because she has said it was her favorite TV show.

Art Style: 8.4/10- As with previous seasons, the lack of an HD remastering prevents it from holding up as well as it could, but overall, Book 3 is far superior to the previous seasons in terms of animation. What is most noticeable is the improved fluidity of the animation, as well as some scenes that are visually striking with the use of color. Additionally, Book 3 takes a few more cues from anime with the use of some visual tropes, and even a "Beach Episode," which is actually one of the stronger episodes of the series.
Soundtrack: 8.8/10- As before, Jeremy Zuckerman's score is brilliant and fitting for the series. What makes this season standout is the use of more emotional tracks in the final episodes, which add to the impact.

Humor: 8.7/10- Despite containing less than the previous seasons, the humor in Book 3 is consistently funnier and rarely detracts from the serious moments. Of course, Sokka is still the best!

Entertainment Value: 9.7/10- Considering that I marathoned the series in less than three days, I would say that I was thoroughly entertained. Every episode had humor, action, and progression in the story. It reminded of a much lighter version of Fullmetal Alchemist with its combination of various tones.

Overall: 9.5/10- Avatar: The Last Airbender Book 3 is not flawless, but it draws upon everything that has been setup in previous seasons and concludes the quest of the Avatar and friends in epic and satisfying fashion.

Closing comments: As a whole, Avatar: The Last Airbender is a truly epic story that has something for kids, teens, and adults. Providing you can get past the first season and a few childish parts, The Last Airbender is one of the most interesting and unique fantasy narratives I have ever seen.

Posted by James the Reviewer at 8:14 AM