Doctor Who: The Caretaker Review

"The Caretaker," a fun and comedic episode with a surprisingly dramatic twist.

The Doctor goes on an undercover mission to Coal Hill School to stop a robotic killing machine, before it destroys the planet. 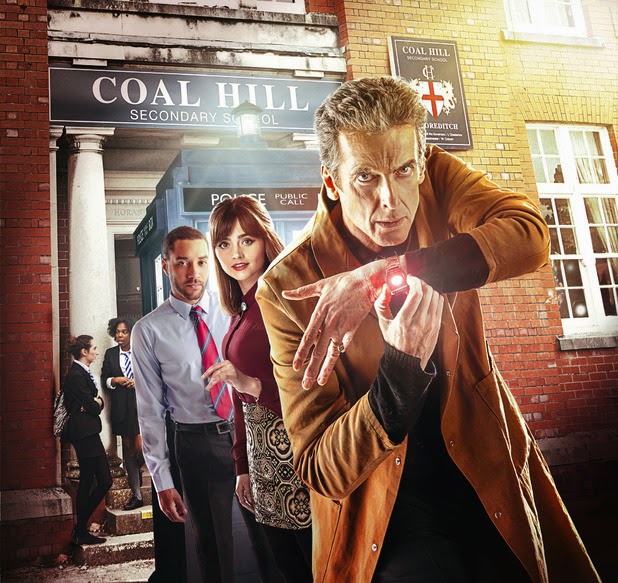 Steven Moffat and Gareth Roberts penned the episode, and unlike Moffat's last attempt at comedic dialogue, in the premiere episode of the season, both the comedy and the drama worked in "The Caretaker." The dialogue was fun and witty, while the excellent performances from Capaldi, Coleman, and Anderson made the dramatic character driven segments some of the highlight moments of the season in terms of acting. Jenna Coleman continues to be a standout with her performance being very believable and human ever since the first episode and Samuel Anderson as Danny finally received some true character development and screen time. Of course, Peter Capaldi's Doctor is still at the top of his game as always. In terms of plot, "The Caretaker" mostly served to create a MacGuffin so that the Doctor would have a reason to "go undercover" at the Coal Hill School, so that Danny could discover Clara's secret, and thus drama ensues!

Leading up to Danny discovering the truth, there was a lot of great humor, in the vein of "The Lodger," one of the funniest episodes of the Smith era, except with Capaldi's different style of humor.

One of the funnier moments of the episode is when the Doctor thinks that the other teacher, who looks like a certain bow-tie wearing Time Lord, is Clara's boyfriend, and considering how vain the character has been this season, his satisfaction that Clara might still be fond of his old look is rather clever and funny.

Moving on to the interstellar MacGuffin, the Skovox Blitzer was neither a bad foe, nor a good one, but just a generic and forgettable one. That being said, the Skovox Blitzer reminded me of a certain Mass Effect character (Garrus).
"The Caretaker" is one of those inevitable episodes that had to happen at some point because Danny needed to find out about the Doctor, and it is handled in a decidedly different way than other similar takes on a (possible) future companion seeing the TARDIS. Danny's reaction is refreshingly logical. Instead of being "wowed" he is more skeptical and afraid, yet ready to take action. One thing in general that has confused me about Doctor Who's universe is how much does the public know about alien invasions? When considering how many countless times aliens have invaded or caused something strange to happen in England in both Doctor Who and Torchwood, does something always happen to make everyone forget or to cover up every time? If someone knows the answer, please let me know, because I cannot remember.

Back to Danny, Anderson's performance was particularly top notch in the episode. Having the Doctor dislike him because of his military background was certainly expected, but Danny saying that the Doctor is an officer was not. The Doctor's dislike of soldiers has been a recurring theme throughout this season, and it really pays off in this episode. The entire heated exchanged between Danny and the Doctor in the TARDIS was acted superbly well.

Danny and Clara's brief moment of relationship drama has not been done in Doctor Who, but it is not all that original either. However, it worked thanks to the strong performances from both actors, who sold the scene well. Also, the ending scene with Danny talking to Clara about not pushing herself too much was a nice touch. My only problem with any of Danny's scenes was that frontflip. Wasn't there some other way he could have distracted the Skovox Blitzer?

And finally, Missy returns, well, kind of. The security guard that is blown to pieces by Skovox Blitzer is now in the "After-life" or "Promised land," and considering that we saw his burnt remains, it is safe to assume that he was not just teleported to safety. Hopefully the explanation for Missy and her "Promised Land" will not be as daft as I expect it to be.

Overall: 8.0/10- While lacking in plot, "The Caretaker" is a superbly acted and humorous character driven episode with some new character beats not often seen in Doctor Who.

Posted by James the Reviewer at 7:33 AM