The Legend of Korra: Book 1, the first season of the sequel series to the popular Avatar: The Last Airbender. Taking place more than 70 years after the events of the original series, a new Avatar is born, and her name is Korra. For those not in the know, after an Avatar dies, a new one is born and he or she must master the four elements of Fire, Earth, Air, and Water and bring balance to the world. 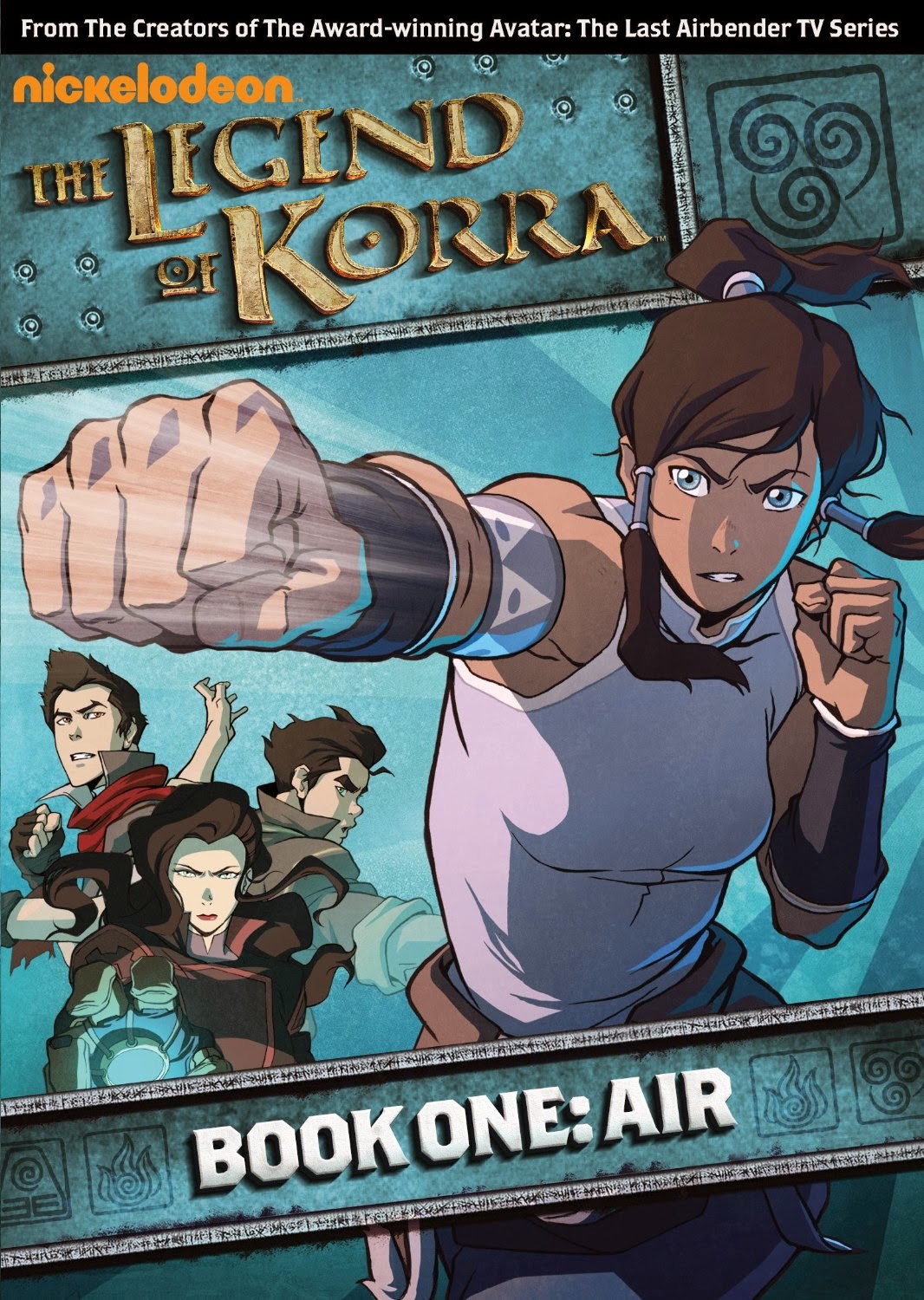 In the world of Avatar, there are people who have the ability "Bend" the different elements to project blasts of fire, move rocks, freeze water, ect. Some people are benders, while others are not. After several years of peace, a new threat arises from a group of Anti-Bending "Equalists," who want to eradicate the Benders. Unlike a lot of similar stories where the people who are "different" are the lower class citizens, like Mutants in the X-Men franchise, the Benders have the political power, as well as control of the police force. Bender gang and mafia harass non-Benders by making them pay for protection, thus causing more upheaval and unrest, and as with most governments, there is political corruption abound.
The Good: Beautiful animation, Awesome action sequences, Steampunk aesthetic, Likable new characters, References to original series, More mature themes, Political intrigue, Unique setting, Excellent voice cast, Steve Blum is a bad*ss villain, Shocking plot twists,

The Bad: Cop out ending, Meelo is annoying,

Plot: 8.7/10- One aspect of The Legend of Korra that I really like is how different it is from the previous series. Whereas The Last Airbender was a fantasy epic akin to The Lord of the Rings, The Legend of Korra is more about what happened afterwards, and the world that was created from the events of the first series, while still providing enough information for newcomers to understand what is going on. Another interesting aspect is the setting. The Last Airbender was set in what is roughly the equivalent of Asian's Medieval Times, except with a little more technology. On the other hand, Korra is set in a steampunk 1900-30s with cars and trains, but not guns.

As for the plot of Korra, unlike Avatar, Korra seems to be a self contained narrative with almost all of the plot threads of the season being tied up. The most likely reason for the tidy ending is that only one season of the series was originally planned, until it had success, then later seasons were greenlit. Also, Korra only has 12 episodes in the first season, opposed to 20 of Avatar, which is both a positive and a negative. On one hand, fewer episodes mean a more focused plot with less filler, but on the other, it provides less time to tell the story. The first six episodes establish the world and characters effectively through the use of the "Pro Bending" tournaments where some Benders are revered as athletes, which is a logical progression during times of peace. After episode 6, the main plot begins to pick up with a very serialized narrative, more akin to anime.
Despite several shocking plot twists, the last part of the series did have somewhat of a "Deus ex Machina" cop out, which has left many fans divided. Sure, there was some foreshadowing, but it ultimately made what happen throughout the season not particularly monumental. Ultimately, the ending did not ruin my enjoyment of the rest of the season, which explored some fairly complex themes, and the fate of the antagonists was done brilliantly, I can let the cop out ending slide.

Characterization: 8.5/10- Korra, the titular character, is the new Avatar and within 5 minutes of the series, it is shown that she has already mastered three of the four elements with Air the only left. While Avatar Aang in the original series was consistently the weakest character of the cast, Korra is the best part (in the first season at least). She is tough, strong headed, and arrogant to a degree. Out of all the main characters, she is my favorite (not so much in later seasons).

Mako, named after the original voice actor of Iroh, Mako Iwamatsu, in The Last Airbender, is a Pro-Firebender. In the first season, he is not particularly well defined or likable, but he grew on me some during the season. Bolin is Mako's brother, and he is the comic relief character like Sokka was in The Last Airbender, albeit not nearly as interesting. He is a fine character, but not particularly remarkable, yet he is still no Sokka, which is kind of an unfair comparison, but still.
Asami Sato is essentially the fourth member of the new "Team Avatar," being the only non-Bender of the group. She is cool, and her character's design is rather striking.

Tenzin, *Possible Spoiler* son of Aang, *End Spoiler* is Korra's Airbending master, and his family are the only Airbenders remaining. He is a likable old teacher and one of the better aspects of the series.
Lin Beifong is one of the coolest and most bad*ss parts of the series, which should be no surprise since her mother, Toph, did the same for the original series. She is the tough head of Police and an all around awesome character.

Amon is the mysterious antagonist and leader of the Equalist forces. Being voiced by none other than Spike Spiegel (Cowboy Bebop) himself, Steve Blum, Amon is, of course, going to be one epic villain.
The only problem with the characterization is the romance, which is not handled particularly well. At first, I was on board for the romance storyline, but it could have been executed with more finesse and believability.

Action: 9.6/10- While the action sequences in Avatar were impressive, The Legend of Korra blows them away with stunning visual spectacles. The choreography is simply amazing! Each element is used so brilliantly to create genuinely exciting set pieces that even rival a lot of anime. The only negative is that the "Pro Bending" tournaments do get a little old after the first few.

Acting: 9.4/10- With the exception of a few side characters, all of the voice acting in the series truly excellent! Almost everyone takes their roles seriously with a cast that features several notable actors like J. K. Simmons (Spider-Man), Seychelle Gabriel (Falling Skies), Dee Bradley Baker (The Clone Wars, Teen Titans), and Steve Blum (Cowboy Bebop, Code Geass, FLCL). Janet Varney should be given special credit for her strong performance as Korra.

The Last Airbender had fairly solid animation for the time, but The Legend of Korra has a much more mature style with perfect character designs that actually resemble the work of Shinichirō Watanabe (Cowboy Bebop, Zankyou no Terror). The fluidity of the animation is like a flowing river with the action scenes being a real treat for the eyes. The attention to detail with the background animation is fantastic with it bringing the steampunk aesthetic to life. Some anime techniques are used, which add even more to my liking of it.

Soundtrack: 9.5/10- Jeremy Zuckerman gives us a truly top notch score that incorporates variations on Avatar's score, most of which are better than the originals. In addition to the variations, Zuckerman uses some fun big band music to fit the 1920s-ish setting.

Humor: 7.8/10- While less humorous than The Last Airbender, the humor that is present is handled well with the exception of most scenes involving Tenzin's son Meelo, who is annoying!

Entertainment Value: 9.6/10- Considering that I literally watched the entire 12 episode series in one day, I have to say that I was thoroughly entertained from beginning to end.

Overall: 8.5/10- Book 1 of The Legend of Korra brings us back to the world of Avatar with positively outstanding production values, mostly likable new characters, and an exciting direction for the series to head in the future.

Closing comments: The Legend of Korra has now convinced me that western animation is not entirely dead after all, even if it is heavy influenced by the east.

Posted by James the Reviewer at 8:26 AM