After last week's masterfully creepy adventure, "Time Heist" is a fun romp with some great twists. 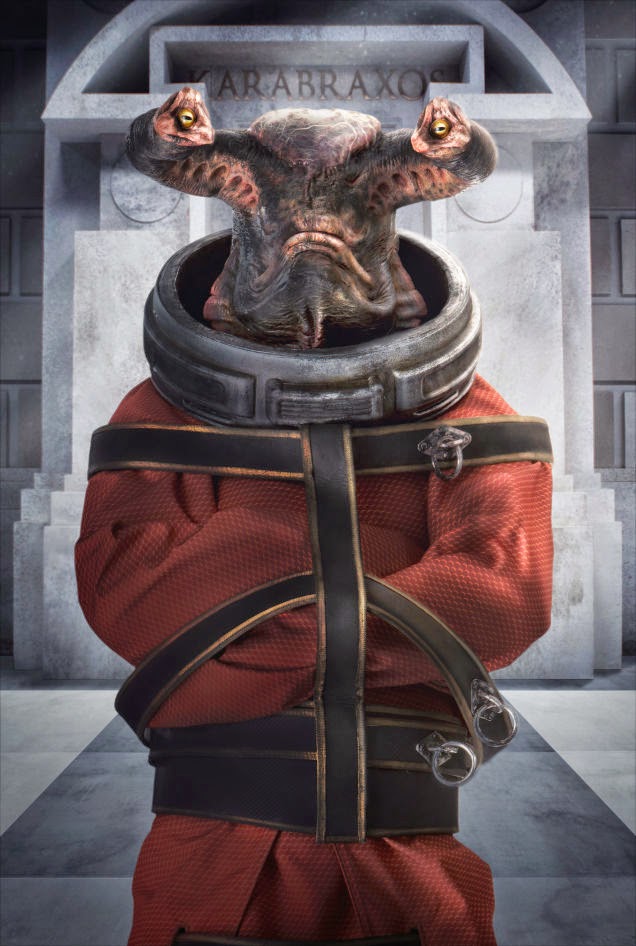 Great heist movies are few and far between in the last several years with only Ocean’s Eleven (and Inception, if that counts), yet Doctor Who delivers one of the best and most unique heist stories in recent years.

When the Doctor gets a phone call from the TARDIS' phone, he mysteriously ends up in a room with Clara, and two other people, the human cyborg, Psi, and the mutant shape-shifter, Saibra. They are instructed by a mysterious figure, known as the "Architect," that they have been assembled to rob the most secure bank in the galaxy, the Bank of Karabraxos. However, none of the participants have any knowledge of being hired, and thus begins a heist where the robbers have no idea why or what they are stealing.
*Spoilers Ahead*

Capaldi's Doctor, particularly his eyebrows, took the lead in the episode, as the four try to rob the bank. One especially interesting moment is when the Psi refers to the Doctor as someone with "Professional Detachment," or something to that effect, due to how indifferent he was after Saibra's apparent death, which seems to be a recurring theme this season. Also, before Saibra supposedly committed suicide, she told the Doctor that he is a good man, which is another theme being explored throughout the season.
Clara does not have as much of a presence as she did in previous episodes, yet she is still the same old lovable Clara. Although, it almost seems that almost everything could have happened without her involvement in the episode.

Moving back to the plot, Doctor Who continues to show its wide range of genre possibilities with its unique twist on the heist genre. How many heist movies are there where why and what the robbers are stealing is just as intriguing as how they are doing it? The various twists and turns of the plot, bolstered by classic heist movie music, turned out to be a lot of fun. The entire episode had a heavy David Tennant vibe as well, and the lack of Missy or the Promised Land is more than welcome.
Another highlight of the episode is this week's monster, the Teller. From a special effects standpoint, it is excellently executed for the TV standards. Conceptually, the Teller is both kind of frightening, yet sympathetic by the end. The twist about freeing the Teller and his mate was a smart twist, and it is the type of thing that the Doctor would do. The Doctor turning out to be the "Architect" was not entirely unexpected, since about 3/4 of the way through, I called it, but it was a smart twist nonetheless. The idea of hating yourself is another intriguing theme explored throughout the episode as well.

As side characters, Psi and Saibra are two of the more memorable and fleshed out ones in a while. Sure, they are not amazing characters, but over the course of one episode, they have solid character arcs, particularly Psi, who had that excellent moment saving Clara.

The only standout flaw of the episode is Ms. Delphox herself. For an antagonist, she is not particularly compelling. The big twist that she was behind the whole heist from the future is an intriguing one, although if the Teller is freed from her control, doesn't that change her past and thus she never had a reason to call the Doctor in the first place? Well, this is Doctor Who, not Steins;Gate, so at least it makes more sense than the Terminator movies.

Posted by James the Reviewer at 7:16 AM