Today I will be reviewing Agents of SHIELD's first season, and this is a spoiler-free review so that those that have either not seen the series, or dropped it after the lackluster start can decide whether or not to pick up the series. 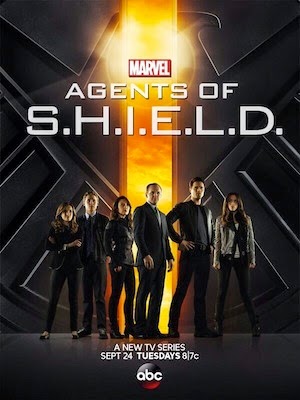 Agents of SHIELD follows the events of the Avengers with Coulson being sent back into action with a new team to takedown treats ranging from alien technology to evil organizations. After strong initial ratings, Agents of SHIELD is a series that has been met with a very mixed response by fans and casual viewers alike. Due to the inconsistent and somewhat slow start, many viewers dropped the series, but those that did, do not know what they are missing when the second half of the season delivered in spades with strongly written episodes are capitalized on the events of Captain America: The Winter Soldier.
The Good: Likable characters, Whedon's witty dialogue, Amazing Captain America: The Winter Soldier tie-in episodes, Unexpected plot twists, Effective use of comic book source material, Coulson is back!, Great chemistry between the cast, Impressive action scenes for TV, Great humor, Satisfying reveal (even if it took too long), Memorable quotes, Firefly reference, Bill Paxton was freaking awesome!, Fantastic finale,

The Bad: Lackluster start, A few so-so episodes, First half had too much glossy and cheap lighting, Problematic pacing,

Plot: 8.1/10- Agents of SHIELD's writing is often inconsistent during the first half with the episodes feeling as though they are buying time by meandering along with a non-serialize episodic format. While episodic series can work out well, one or two episodes of the first half felt a little too derivative. For the majority of the first half however, the series was fun and incorporated a lot of sci-fi and comic book type elements, even if the writing was not always the best. Despite this, the first half did have some truly excellent episodes like "F.Z.Z.T." and "The Bridge." Unfortunately, the Thor: The Dark World tie-in, or lack-thereof, felt like a missed opportunity for a crossover into the bigger cinematic universe.

On the other hand, the second half of Agents of SHIELD is excellent! While the first two episodes of the second half were good, but not great, from episode 13, "T.R.A.C.K.S.," onward the series became focused and finally revealed some of the secrets that it was holding back for too long. In addition, the series took on a darker and more serious tone. Without spoiling anything, those that watched Captain America: The Winter Soldier will be greatly rewarded with how the series tied into the film's storyline. Also, watching the series in conjunction with the film provided an even more rewarding experience as the series left hints at what is to come with the film fulfilling on the hints in the best way possible.

Characterization: 9.2/10- In typical Whedon fashion, Agents of SHIELD is a very character driven series with an ensemble of likable characters. Unlike his previous work however, Joss Whedon only had a hand in writing the series and directed only the first episode, leaving the series to his brother Jed and his sister-in-law Maurissa. While they are not as consistent as Joss with their witty writing, they certainly know what they are doing most of the time. For example, Firefly managed to create and establish some of the best and most lovable characters on television. On the other hand, Agents of SHIELD took quite a bit longer to establish the characters on a similar level with the exception of Coulson, who we all were attached to from what happened in the films. In fact, the biggest problem with the characterization is that the characters are shown to have secrets and inner problems, which is great, but it takes nearly half a season before anything is revealed.

Fortunately however, once the characters are suitably established, they are likable and develop strong chemistry and believable relationships. Fitz and Simmons are among the most lovable characters, and their character arcs are satisfying. Melinda May is the cold and stoic "Ice Queen" of the team that kicks all sorts of butt throughout the series. While her character could have been developed more, what we got was adequate. Of the cast, Skye is the most inconsistent ranging from being a very well executed character to being more of an unnecessary addition. By the end of the series however, more of her backstory is teased with some unexpected twists. Agent Grant Ward is an interesting case considering that his character goes through quite a drastic change, albeit one that takes some time to see, but it certainly works out superbly in the end.

Aside from the main cast, the series introduces characters from the comics like Agent Garrett and Victoria Hand, as well as fun cameos by SHIELD Agents from the Marvel movies, which I shall not spoil.

Action: 9.2/10- Aside from Arrow, Agents of SHIELD delivers the best action scenes on network television. While they may be significantly inferior to most movies, in comparison to television, the action and choreography is often quite good.

Acting: 9.3/10- While a few members of the cast took some time settling into their roles, Clark Gregg was as strong as ever returning as Coulson.

Iain De Caestecker and Elizabeth Henstridge as Fitz and Simmons had instant chemistry from the onset. Brett Dalton's performance varied from dull to great later in the series, and Ming-Na Wen effectively played the stoic character. Chloe Bennet as Skye varied at times, but ended up settling into her role well by the end. Bill Paxton was positively outstanding as Agent Garrett! His veteran presence brought a lot to the series giving the show exactly what it needed. Amy Acker has a small guest role in one episode, and you can never have enough Amy Acker.

Special effects: 7.2/10- For TV, Agents of SHIELD's special effects are not especially bad. However, due to the fact that superpowers are not particularly conducive to television, some effects are awful. On the other hand, the sets are mostly very good, even if the SHIELD offices are noticeably subpar compared to the ones in The Winter Soldier. My biggest problem with the effects and direction is that the first half of the series implemented very poor use of lighting, thus giving the series a cheap look and feel.

Soundtrack: 8.3/10- Bear McCreary, notable for composing the scores for The Walking Dead and Battlestar Galactica, does a fine job scoring the series with a memorable, albeit short, main theme. Unfortunately, the majority of the score is not available anywhere for me to listen to on its own.

Humor: 9.3/10- While not all of the humor hit the mark, most of it did. The dialogue between the characters is fun and filled with memorable quotes.

Something that I forgot to mention during my review of episode 20 is that when Coulson learns of some interesting news, he just stares and utters a "Huh," which is obviously a reference to Captain Malcolm's response when he discover River on his ship in the first episode (gifs below).

Entertainment Value: 9.8/10- As a massive fan of Marvel, having the ability to watch something from the Marvel universe every week is incredibly satisfying. Almost every episode had little references for me to geek-out about and had something for me to get excited about. Even though I record everything on a DVR, Agents of SHIELD is the only series that I had to watch every night on Tuesday.

Overall: 8.6/10- Agents of SHIELD is truly a tale of two half seasons. The first half of the season, while fun, did not quite live up to the high expectations fans have come to expect from Marvel, and if I were to rate it apart from the first half, it would receive a 7.5/10. On the other hand, the second half, with the exception one or two episodes, turned out superbly as it became more serialized, darker, and tied in directly with the Marvel Cinematic universe as an extension to the overall universe rather than a sidestory, and rating it individually, it would receive a 9.6/10, which is how I end up with the final rating of 8.6/10. Anyone interested in the Marvel movies should most certainly be watching Agents of SHIELD, even if you have to slog through a few subpar episodes in the beginning.

Closing comments: While Agents of SHIELD certainly has plenty of room for improvement, thanks to a superb second half, the only season finale of the year not to disappoint, and a healthy dosage of Marvel fanservice, Agents of SHIELD ended up being one of the better shows on television.

For my full spoiler reviews of each episode, as well as other TV reviews, you can click here.

Posted by James the Reviewer at 8:59 AM