Log Horizon, the series that definitively captures what a video game would be like if you were trapped inside.

With season two of Log Horizon right around the corner; it seemed like a great time to review one of the best series of 2014. 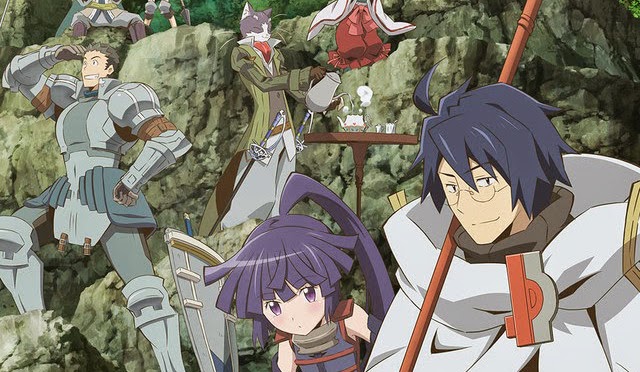 If you remember my First Impression post about Log Horizon, I was rather impressed by the first few episodes and the rest of the series certainly did not disappoint as it became more complex and deeper in both characters and story. Not only does Log Horizon perfectly capture the feel of a video game, it is an intelligent work of science fiction and fantasy set in a medieval world that is familiar, yet original thanks to the introduction of the MMORPG (Massively multiplayer online role-playing games) mechanics. For those not familiar, MMORPGs are video games that thousands of people play online at the same time, and teamwork and forming groups and guilds is an important aspect of any MMO. Some examples of MMORPGs include, Star Wars: The Old Republic, World of Warcraft, and Guild Wars 2. As a player and fan of the genre, I loved the setting and the accuracy in which Log Horizon portrays the gaming experience.

The Bad:
Plot: 9.8/10- One day thousands of players happen to wake up in the video game Elder Tale, but no knows why or how that happened. Unlike another MMO set series, like Sword Art Online where players use virtual reality helmets, Elder Tale is just a standard video game that players play with a keyboard and mouse, just like the ones that I play, which makes why or how the players are trapped all the more mysterious.
Another thing that sets the series apart from others is that *Episode 1 Spoiler* when you die in the game, you do not die in real life; you respawn at the closest spawn point just like a video game. One would think that, without the risk of death, Log Horizon would lose tension and a sense of importance, but that is far from the case.  In the Elder Tale world, the players are immortals who are far stronger than the NPCs (non-player-characters), which are the characters that inhabit the world, and are thus perceived as superhumans (think of Asgardians coming to Earth in the Marvel universe). Basically, Log Horizon is an exploration of a world where people from our world become immortals and are placed in a familiar high-fantasy setting where the NPCs are the equivalent of people. One minor thing that felt odd is that no one panicked when they realized that were trapped in the game. While it was great seeing that most everyone just accepted what was happening, at least a few would have tried to kill themselves to get back to the world. Also, the characters in the series are not particularly concerned with getting back to the real world. In fact, their main goal is to make the world that they live in a better place. 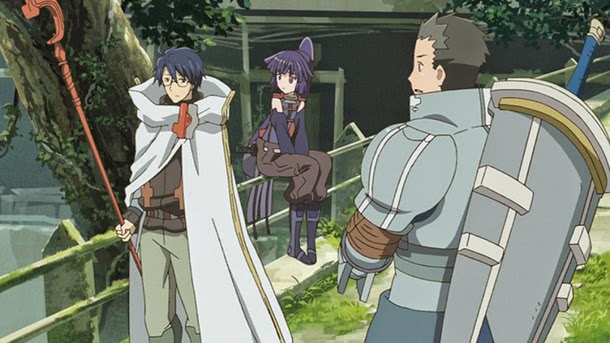 Trying to explain Log Horizon's plot is difficult because it is so complex. Due to the complexity, there is a lot of exposition throughout the series, which explains many of the game's mechanics. Because of this, viewers that prefer their fiction light on exposition and heavy on action will be disappointed. In fact, while there are some great action scenes, Log Horizon is much more a political/economic thriller and strategy series that focuses on how to strategically create peace in the lawless world, and when the need arises, uses strategy, rather than "Willpower," to win battles. In many ways, the series reminds me of Code Geass with the strategy, but also Spice and Wolf since the characters use economic to gain power. Because of these factors, I loved the series' way of doing things! Also, Log Horizon's tone is surprisingly fun and lighthearted. There is quite a lot humor and since no one dies (there are significant penalties though), the series is never melodramatic, and remains fun throughout. There are two minor problems with the series. One is that, in the final three episodes, the tone leans towards a romantic comedy, albeit a very well executed one. The other problem is that the series does not have a definitive conclusion. Fortunately however, a second season will be coming this Fall.
*End Spoiler*


Characterization: 9.7/10- Log Horizon has a large cast of characters, yet it manages to give the audience enough screen-time with each character to the point where you feel as though you know these characters. The series is very character driven, and even some of the NPCs are given well thought-out characterization.

Shiroe: Shiroe is the main character of the series. Unlike basically all other protagonists in similar stories, Shiroe is not a lone-wolf, because, as anyone that plays MMOs knows, playing solo is virtually suicide unless you stick to low-level dungeons. Instead, Shiroe is a master strategic and an experienced player. In the game, he is a mage support-class, which is my preferred class in MMOs, which uses abilities to aid allies and hider opponents in battle rather than dealing damage directly. In many ways, as many viewers have cited, Shiroe is much like Light Yagami from Death Note or Lelouch from Code Geass, except he is a good guy, who has the best interest of everyone in mind, which makes him a very likable character. Also, he wears glasses, and is referred to as "The Villain in Glass" because of his cunning wits and no one has ever pushed up their more epically than Shiroe.

Akatsuki: Akatsuki is the group's assassin (DPS in gamer lingo). She is heavy into role-playing as the faithful ninja to her master Shiroe. There is some fun romantic tension between Akatsuki and Shiroe. Even though Akatsuki has elements of anime archetypes like tsundere, she does not fit into any one archetype, which is good.

Naotsugu: Naotsugu is an experienced player that Shiroe has known for some time. He is a tank class, and because of this, he actually reminds me of my friend, and leader of my guild, Buruk (character name not real name), which is cool.
These are just the first few characters that the series revolves around, but many more are introduced, and considering the sheer volume of characters, the series does an excellent job of giving each character the perfect amount of time to develop. 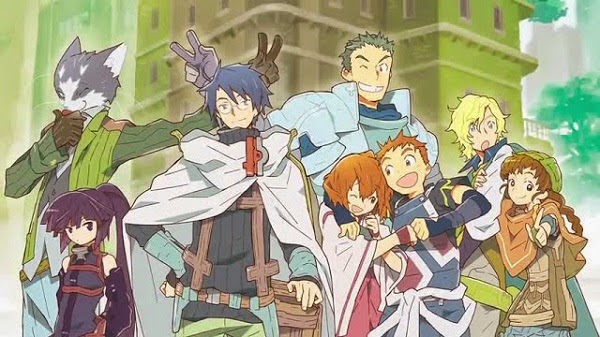 Action: 7.8/10- Log Horizon is not a particularly action heavy series. Despite this, there are some impressive large scale battles that remind me of the Lord of the Rings, or massive raids in MMOs. Also, all of the action scenes actually follow the rules of the world that have been meticulously set up and explained. Do not expect characters to use game breaking powers to win battles, (looking at you Sword Art Online) but rather strategy, just like in a real video game.

Acting: 9.1/10- Being that Log Horizon has recently concluded, the English dub is not currently produced; however, a dub is set to be released sometime in November. That being said, the Japanese cast is superb! Everyone does a fine job at portraying their characters.

Art Style: 8.9/10- Studio Satellite’s animation for Log Horizon's is unique. While not necessarily the most fluid and detailed animation ever, I found it to be particularly appealing and easy on the eyes. When the series makes to be serious, the animation remains constant. Conversely, when the series wants be humorous and lighthearted, the animation can change to chibi or generally comedic, which is surprisingly effective. Also, fanservice in Log Horizon is virtually non-existence.

Humor: 8.9/10- While Log Horizon is not comedy, there is plenty of great humor throughout the series. Fortunately, the comedy is never misplaced nor encroaches in on the serious aspects of the series.
Opening and Ending: 9.3/10- "Database," the opening song, annoyed me at first because I hate any all things that resembling rap, but I really ended up loving it by the fifth episode. Seriously, I listen to the song on a loop all the time. Thankfully, the opening does not change throughout the entire series. The ending theme is somewhat generic, but still worth listening to sometimes.

Non-Otaku Appeal: If you are a gamer, particularly a MMO gamer, Log Horizon is the best gateway anime providing that you prefer a smarter strategic based series opposed to an action-packed. Also, if you are into character driven sci-fi/fantasy with world building, Log Horizon is perfect.

Entertainment Value: 10/10- Log Horizon is my type of series. It has everything from the smart strategy, to the world building, to the humor, and all of it entertains me.

Personal/Gamer Rating: 9.6/10- Log Horizon successfully merges my love of videogames and Tolkien's exposition heavy style of fantasy storytelling to near perfection. It is fun, smart, and one more the unique experiences you will have.

Non-Gamer Rating: 8.7/10- While accurately rating Log Horizon from a non-gamer is difficult, I do believe that if viewers do not mind the exposition parts that explain the game mechanics, you should be able to find a lot of entertainment.

Note: Unlike some other series, Log Horizon is rather tame in terms of content. There is nothing that I would not show to a young teenager, except for the fact that Log Horizon is probably too slow and dialogue driven to hold younger audience's attention.

Posted by James the Reviewer at 8:14 AM