Noragami, Japan's version of Thor, and the one the more enjoyable series currently on Netflix. It also happens to be a quick watch at only twelve twenty minute episodes. 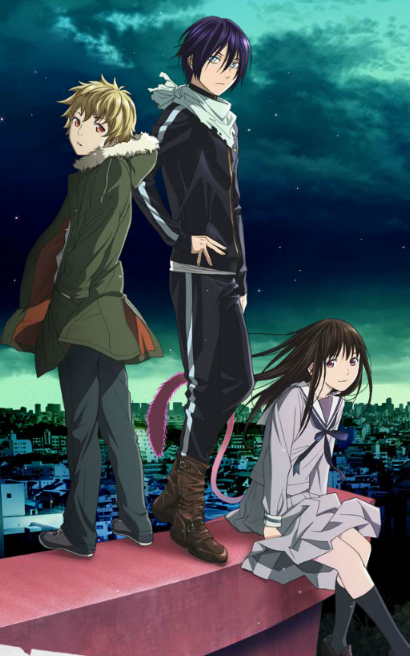 Noragami is set in modern day Japan where many of the characters from mythology exist in the real world. The series itself follows Yato, a little known mythological figure, who makes a living from ghostbusting and taking requests, including doing odd jobs for cheap. One day Yato walks out into the middle of traffic and a normal girl, Hiyori Iki, saves him. However, in doing so, her spirit starts to randomly leave her body because of her contact with the "Far Shore," thus making her a "Half-Phantom." After this, Yato, Hiyori, and a few other characters fight Phantoms and deal with some surprisingly compelling issues.

Noragami starts out high energy with a lot of fast pace humor, and as the series progresses, it delves into darker territory with more complex themes, and the transition is rather successful. While the plot is not the most complex, the world it creates is a lot of fun.
In Noragami, for people, like Yato, to battle Phantoms, they use the souls of dead humans to create weapons called "regalia" (or shinki), and when not in battle, they follow their masters around. Some masters are very strict, while others are nice to servants.

Characterization: 8.9/10- The aforementioned Yato is the main character of the series, and he is a fun one at that. He is not the typical shounen protagonist, since, despite his appearance, is hundreds of years old, even though he does act humorously immature at times. Towards the later part of the series, he really starts to show growth as a character.

Since Hiyori is new to the world of the "Far Shore," (the ghost world of Phantoms) she provides the audience with a viewpoint to learn about and experience the world. Generally, Hiyori is a very likable character with fun quirks, and entertaining interaction with Yato. While I did not realize this until after reading reviews, Hiyori's character can be a tad inconsistent since she berates Yato for being lazy, yet Yato has literally scrubbed bathroom floors for 5 Yen (50 US cents)! Other than that, Hiyori is a great character that does not fit into any archetype. Also, in her Half-Phantom form, she does have a tail.

Yukine is Yato's regalia, which, as previously explained, is the soul of a dead human used as a weapon. Yukine's character arc is surprisingly compelling. When Yukine died, he was only a middle school boy, so he is trying to deal with being dead and not being able to live a normal life. While young-teen angst is usually annoying, in Yukine's arc, it is rather compelling. Also, when Yukine wears that hat, he looks like Lain Iwakura from Serial Experiments Lain.

Kofuku is a fun side character, who often provides some great laughs! Bishamonten is the series' antagonist for the majority of the series. While not a particularly compelling character, she is not the typical over-the-top ugly monster or big guy that annoys me so much about the shounen genre.

Action: 8.2/10- Noragami is not the most action packed shounen, but when the action comes, Bones' animation is spectacular!

Acting: 8.6/10- The series' strong voice work is a large factor as to why the character drama and humor work so well.

Art Style: 9.4/10- Studio Bones is officially the best animation studio when it comes to shounen series. Their high quality work on both Fullmetal Alchemist series is definitely present in Noragami's animation, which ranges from very good to amazing. The colors used really make the series pop with energy! Also, the series does contain some fanservice, but it is mostly mild and relegated to short scenes every few episodes.

Soundtrack: 8.2/10- Just like the series, Noragami's score is fun and fast paced, and great to listen to.

Humor: 9.2/10- Noragami's humor is one of my favorite elements. While the latter half of the series lacks as much humor, the first half made me laugh-out-loud several times. Also, there is one episode in particular that almost makes fun of the absurdness of the genre (like falling for a very long time, while having a prolonged flashback).

Opening and Ending: 10/10- Even before watching the series, the opening song, "Goya no machiawase" is one that I played on a loop for a long time, and now hearing the song accompanied by the high energy visuals makes Noragami's opening one of my all time favorites. The ending song is slower, but still very good.

Non-Otaku Appeal: Being the shounen genre, Noragami is not the best series for newcomers. That being said, due to its short length, it is an excellent place to start if you want to expand your viewership into the shounen genre.

Entertainment Value: 9.4/10- Thanks to the high energy fun of the first half, and the compelling drama of the second half, Noragami is shounen entertainment at its finest.

Overall: 8.5/10- Noragami brilliantly blends a lighthearted humorous with the darker themes and likable characters for one of the more enjoyable anime experiences that you will have in 2014.

Closing comments: If you want more shounen Bones' Fullmetal Alchemist, but on the shorter side, Noragami is the series for you.

Recommended for: Fantasy fans, Shounen fans, Action fans, Comedy fans,
To read more of my anime reviews, you can click here.
Also, if you have reviewed this anime, leave a comment with a link to your review and I will post it here (providing it does not contain any explicit content).﻿

Posted by James the Reviewer at 7:27 AM