Welcome to the NHK Review

Welcome to the NHK is a critically acclaimed series about a guy named Sato, who is suffering from severe social withdrawal, and much of the series is about Sato and the people around him overcoming their troubles in life, which often results in excellent humor and great drama. 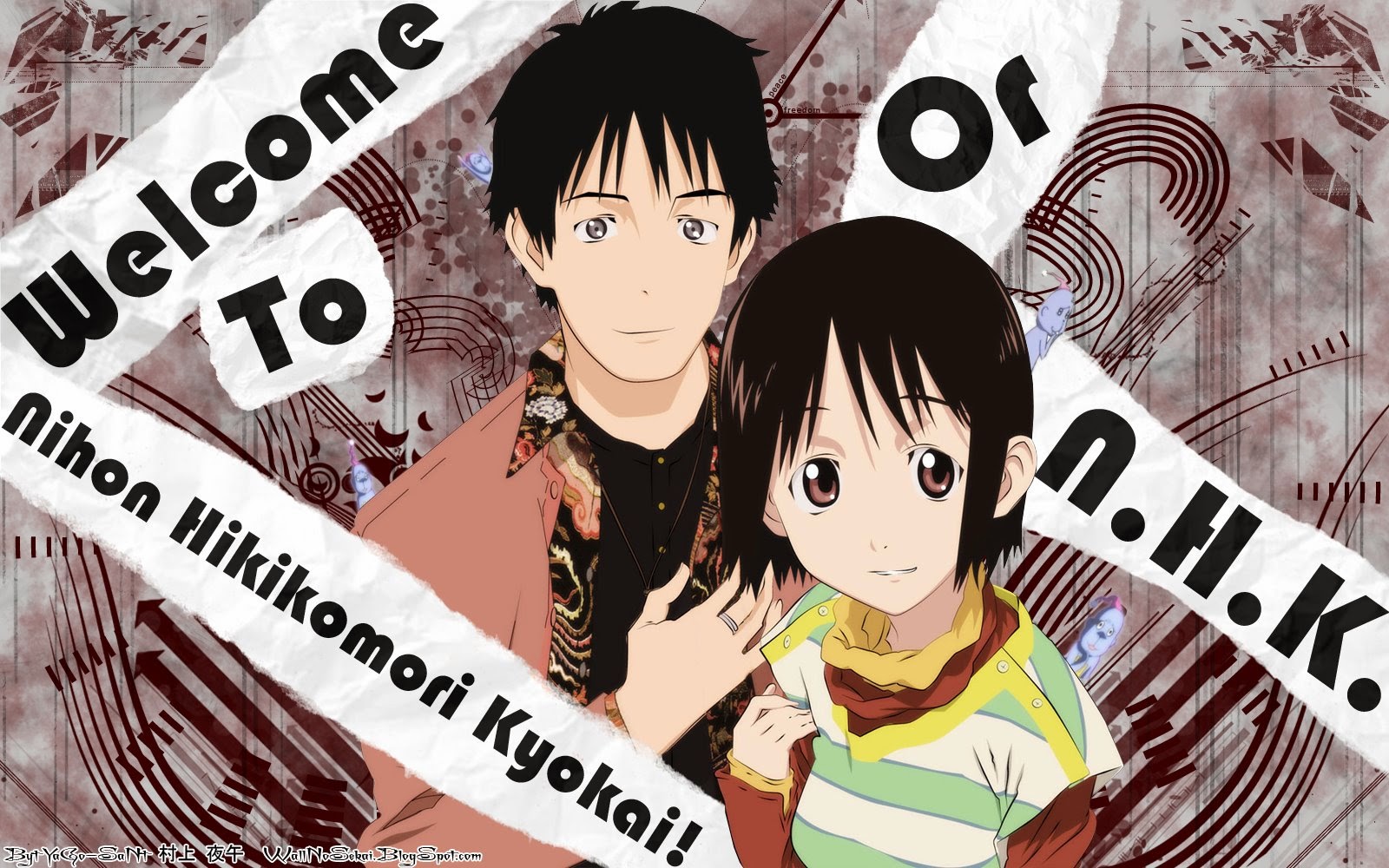 Sato is, what the Japanese call, a hikikomori, which actually means "pulling inward, being confined", or, "acute social withdrawal." Sato rarely leaves his apartment and he becomes extremely uncomfortable around large groups of people. One day he meets a mysterious girl named Misaki that thinks she can cure him of his hikikomori disorder. Also, Sato believes in conspiracies. The NHK refers to the Japanese public broadcasting company, which I believe would be similar to ABC or PBS in America. According to Sato, they turn people into Otakus (anime/manga-fans) by airing addictive television, which turns people into hikikomoris. Also, Sato believes that NHK actually stands for Nihon Hikikomori Kyōkai and that basically means "The Japanese Hikikomori Association." After that, things happen, Sato goes through several story arcs that often deal with different aspects that pertain to being a hikikomori, and there is quite a lot of comedy throughout, albeit black comedy. Really, my brief description of the series does not do it justice because it is one of the better series I have seen.

Plot: 9.4/10- Seeing a Slice-of-Life series not set in high school is a more than welcome change of pace compared to 95% of all other anime ever made. The pacing of the series is near perfection for a Slice-of-Life of anime. I was never bored for more than a minute through the entity of the series. Granted, those that are used to action packed stories will be left bored.

The plot deals with many aspects of the often worst aspects of Otaku and geek culture like addiction to online video games, anime, and even "gal" games (I will never play those). Being that when I was a kid, I was addicted to video games (non-mature video games) that aspect was actually relatable. Also being that I have a few aspects of being a hikikomori, because, outside my family and close friends, I do not like being around a lot of people in person, which is one of the reasons I do not go to parties (not the only reason). So some of that part was relatable as well. Additionally, the plot does a good job at not always making things turn out for the best, but rather realistically.

Characterization: 9.7/10- Anime never ceases to amaze with its ability to produce well realized and likable characters, and Welcome to the NHK is no exception. Most of the characters in the series are messed up to a degree. Whether it be a social disorder or depression, almost none of the characters are exactly right in the head, and the series takes an in-depth into their psyche and what makes them the way that they are. Despite this, most of them are likable characters there is ample and believable reason behind their troubles. Also, there is a good romance intertwined into the story, even if the resolution is not the most satisfying. Now here is a breakdown of a few characters from the series.
Sato: Sato is the main character of the series and much of the plot takes place from his perspective. Despite being a pervert at many points, seeing him overcome his addictions and other troubles is great to watch. It is often humorous, yet satisfying and dramatic without being sappy. Also, he is basically a loser and a college dropout. 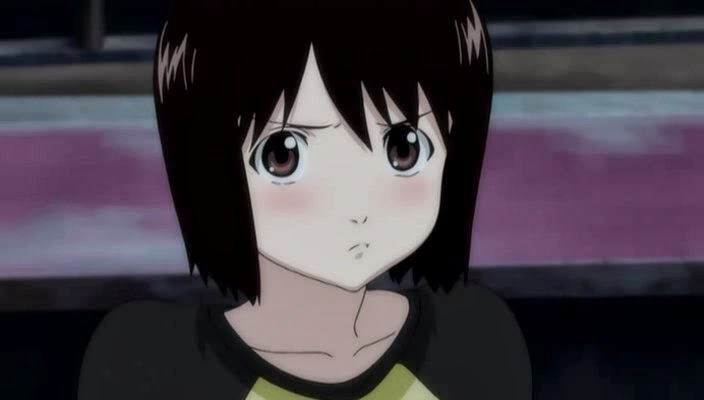 Misaki: Misaki is the girl that offers to help Sato overcome being a hikikomori. At first there is not a lot revealed about the character, but as the series progresses her character develops. For me, she was one of the many great aspects of the series. She was likable for the most part and her character was portrayed very well and very uniquely compared to most. Also, Misaki is incredibly cute without being moe.

Yamazaki: Yamazaki is Sato neighbor and old high school friend. He is an aspiring video game creator, which is one of the main plot points of the series. While he does provide a lot of the humor in the series, Yamazaki is just as troubled as the other characters in the series.

Acting: 10/10- Per usual, there is not a lot to say about the Japanese audio. All of the voices seemed to fit the characters well and the actors all do an excellent job. As for the English dub, it is essentially flawless! Welcome to the NHK has one of the most natural sounding dubs I have ever heard. Chris Patton as Sato kills it, and Greg Ayres balances the humor and dramatic aspects of his character perfectly. Stephanie Wittels as Misaki captures the age and frailty of the character perfectly. In a somewhat side role, Luci Christian is also flawless as always. The actors all sound great without any noticeable weak performances. In short, either dub is perfectly suitable and one of the few where I cannot say anything bad about either side. 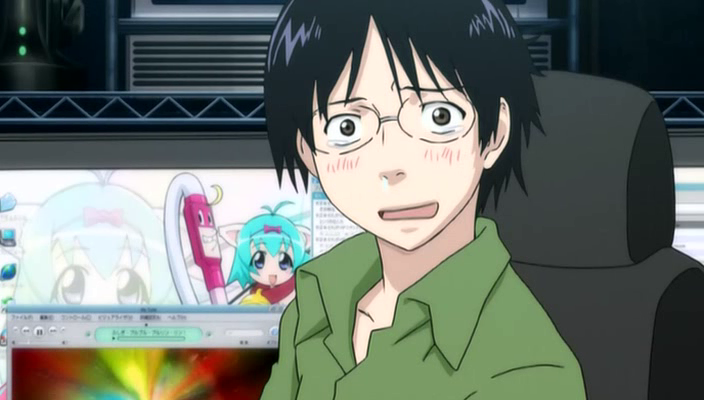 Art Style: 6.8/10- Studio Gonzo's animation is the series biggest flaw. Since it is a slice-of-life, there is not a lot of need for groundbreaking animation, but sometimes the animation looks like it was left to a bunch of monkeys! One moment you have good animation, the next it is incredibly low quality. Gonzo can do some great animation like Full Metal Panic, but they really dropped the ball here. Fortunately, I was able to look past the drop in animation thanks to the involving story. There is, however, one strong aspect of the animation, Misaki's character design. She does not have over exaggerated features and she is cute without being moe. Her design did aid in making her character even more likable.
Also note there is a far amount of fan-service (some explicit) throughout the series, but most of it fits within the context of the series.

Soundtrack: 8.5/10- Welcome to the NHK's soundtrack effectively triggers the right emotion the series is attempting to convey. Also, the soundtrack is different than the usual soundtrack, which is a good change of pace. One YouTube critic compared the series’ score to an independent film soundtrack and that is a fairly accurate comparison.

Humor: 9.1/10- Welcome to the NHK's humor is one of its strongest aspects. While the humor is almost always rather dark, if you, like me, like that type of humor, then you will surely find the series humorous. Additionally, the dialogue is great and often produces a lot of humor. Despite being funny, when the series needs to be dark and drama, which it often is, the change in tone is never jarring.

Opening and Ending: 8.8/10- The opening theme is catchy and fun to listen to. The animation during the opening is a little trippy and odd, but it fits the messed mind of Sato well. The first ending is rather strange, but fits the series, and the second is fine as well.

Non-Otaku Appeal: This is a new section that I have added specifically for those that are not anime-fans since my "Closing Comments" part was getting too way long. Anyway, Welcome to the NHK is the type of series that deals directly with the Otaku culture. If you are not a part of the culture, it would be more different to relate to the characters and what is happening. Therefore, if you are new to anime, this is not a good place to start.

Overall: 9.4/10- Overall, Welcome to the NHK is the type of series that I cannot help but like. There are relatable aspects, excellent characters, and it has a great sense of humor. If you do not normally like the slice-of-life genre and prefer non-stop action then this is not the series for you. On other hand, if you are old enough (18+), then Welcome to the NHK is highly recommended.

Closing comments: Welcome to the NHK is not just an excellent anime, it is one of the best dramas I have ever seen, and that is not an exaggeration.

For another opinion of Welcome to the NHK, you can click here to read Arvin Saints' review of the series.
Also, if you have reviewed this anime, leave a comment with a link to your review and I will post it here (providing it does not contain any explicit content).

For another opinion, you can click here to read Arvin Saints review of the series.

﻿One last thing, I actually looked almost exactly like the picture of Sato below when I finished watching the series because I had not shaved for a week (I was sick). 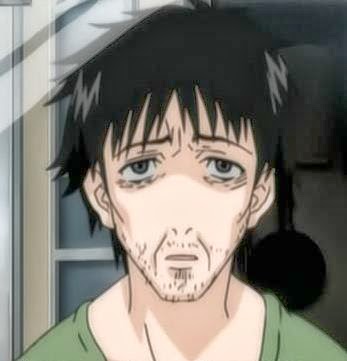 Posted by James the Reviewer at 6:40 AM