Thoughts: Brave, what is generally considered by many critics to be one of Pixar's worst movies not named Cars. My opinion of Pixar has been a mixed one for sure. While I am not the biggest fan of their work, a few of their movies are quite good, particularly the Incredibles and the Toy Story trilogy.
Brave's first 30 minutes where surprisingly good, setting up some interesting character, which made me wonder why most critics where not thrilled about the movie, then, at the 30 minute mark, the movie went completely downhill into a complete kid's movie. While Brave was not a complete "Disney Princess" movie, there where certainly elements that made it feel that way, which obviously did not appeal to me in the slightest. There was a huge missed opportunity with the movie because of the direction it took.
Something else to take note of is that I usually enjoy movies set in Scotland since some my ancestors come from there, although all of my ancestors immigrated before American even became a country, but that is beside the point. In terms of how it looked, the Scottish setting looked excellent.

Plot: The following plot summary is copied from Wikipedia.com.
In Scotland, a young Princess named Merida of the clan Dunbroch is given a longbow by her father, King Fergus, for her fifth birthday, to her mother Queen Elinor's dismay. While practicing, Merida ventures into the woods to fetch a stray arrow, where she encounters a will-o'-the-wisp. Soon afterwards, Mor'du, a giant demon-bear, attacks the family. Merida escapes on horseback with Elinor, while Fergus fights off the bear at the cost of his left leg. Eleven years later, Merida has become a free-spirited, headstrong sixteen-year-old with much younger identical triplet brothers, Hamish, Huburt, and Harris. Elinor informs her that she is to be betrothed to one of her father's allied clans, against her will. Reminding Merida of a legend about a prince who had ruined his own kingdom by pride and refusal to follow his father's wishes, Elinor warns her that failure to consent to the marriage could harm Dunbroch, but Merida is still unhappy with the arrangement.
Watch the movie to see what happens next.

Plot: 5.0/10- The plot is Brave's weakest aspect because after the first 30 minutes, it completely went off the rails smack into a kid's movie. Some of the mother/daughter relationship part was done well, and the ending almost brought the movie back to its previous level, but, in the end, the story was not impressive.
Action: 5.3/10- There was some action and it was animated well, but nothing noteworthy.
Acting: 6.4/10- According to critics that know what Scottish and Irish accents sound like, Kelly Macdonald as Merida sounded more Irish than Scottish, even though Kelly is Scottish. Other than that, her performance as decent I suppose, nothing remarkable though. Billy Connolly as King Fergus was the best actor in the cast, giving an often humorous performance. All of the other voice actors where neither good or bad, just kind of there. Overall, Pixar's films usually have a strong voice cast, but this one disappointed.

Art Style: 9.5/10- In typical Pixar fashion, the animation is positively brilliant! From Merida's realistic hair, to the detail of the Scottish castle, the animation was fantastic. My only problem is that the bear looked subpar to the rest of the animation.

Soundtrack: 7.9/10- Patrick Doyle's Scottish inspired soundtrack is often quite good, however there where few memorable tracks in the film.
Comedy: 6.9/10- There where several moments where I did laugh-out-loud, however the rest of the humor just kind of fell flat. However children will no doubt enjoy the movie a lot.

Would I Watch This Again: No, there is absolutely no reason to watch it again.

Overall: 5.8/10- Overall Brave had the potential to be one of Pixar's better movies, but alas, it failed. While it is not Pixar's worst movie by any means, it is just generic and lacking of anything remarkable.

Closing comments: Although certain demographics, like girls and children, will certainly find more enjoyment out of the movie, it is still worth watching if you are a Pixar fan, just for the animation alone.

Below is a review by one of my favorite film critics, Jeremy Jahns, and I have to say that I agree with just about everyone he has to say about Brave. 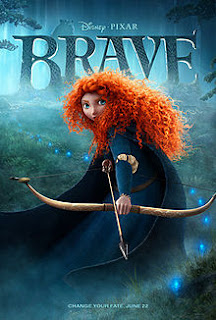 ﻿
If you want to contact us or have any question please send an e-mail to johnstarslayer@gmail.com.

Posted by James the Reviewer at 7:59 AM