Part 2 of my Summer Anime Review is here with reviews for Tokyo Ghoul, Glasslip, Rokujouma no Shinryakusha, and Akame ga Kill! If you missed it, you can read part one by clicking here. 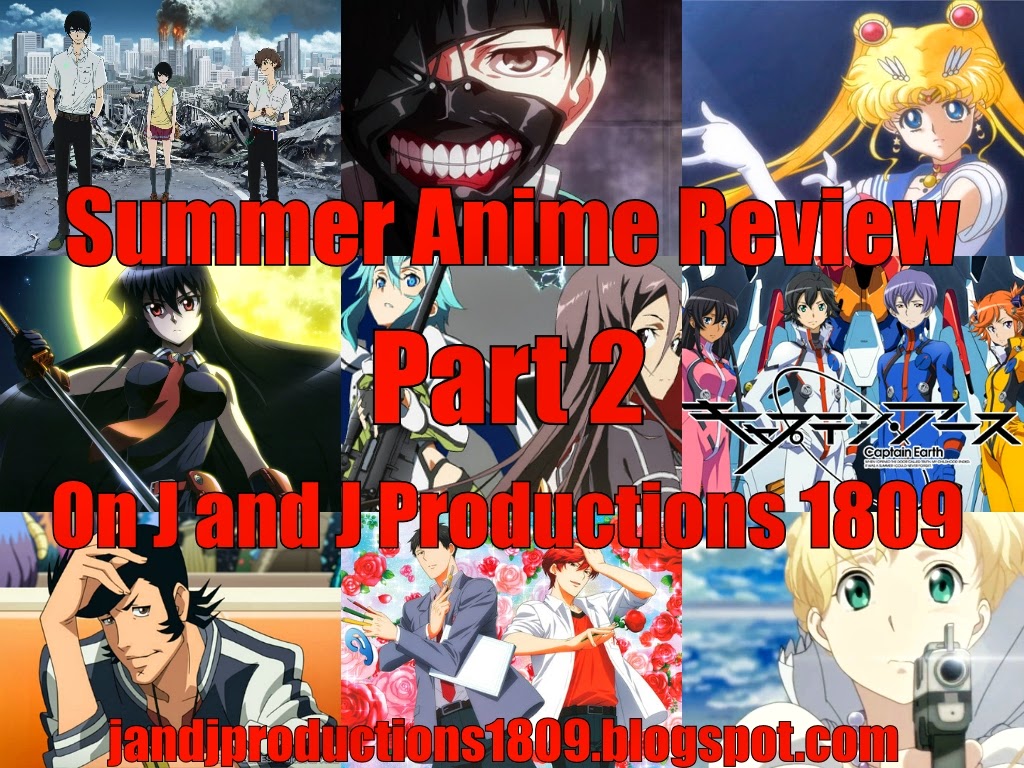 Tokyo Ghoul was the one of the most hyped series of this summer, and it is considered by many to the best of summer, yet it happens to be the most overrated of the season. Fundamentally, the series is nothing more than a standard shounen with buckets of blood. After three very strong episodes, to which I gave 8.0/10 in my first impressions, Tokyo Ghoul fell flat on its face into the worst shounen clichés. All but one antagonist in the series is a complete psycho who cackles and shouts in an overly dramatic fashion, and is without motivations behind their actions, except that they are insane! Apparently, the manga provides a lot more detail, but the anime did not deliver enough development of the antagonists and around the halfway mark, the series nearly bored me to tears at times. Also, it ends on a cliffhanger of sorts, with a ton of loose ends. Despite these flaws, the early episodes and the parts focusing the day to day life of Ghouls, rather than the action, is relatively interesting, and conceptually, the series is unique. The main protagonist, Ken Kaneki, is one of the better portrayed weakling characters, and the young girl, Hinami, is adorable. Overall, Tokyo Ghoul is ambitious and has a solid start, but ultimately stumbles halfway through. If you enjoy gore, the uncensored version is certain to be released on Blu-Ray in the near future. That all being said, there is rumored to be a second season coming in January, and if said rumor is not true, I cannot recommend the series to anyone since Tokyo Ghoul has no ending. Therefore, I will be giving two scores. If the second season is coming, it receives a respectable 6.8/10, and if a second season is not coming, the rating would be a 5.8/10 due to the lack of conclusion.

Glasslip is the most underrated series of the year. The series follows 17-old year Touko Fukami, and her group of friends in her small hometown. When meeting a guy named Kakeru, she discovers that, when she is with him, they can see fragments of the future, although the fragments do not play much of a role in the series. The majority of the series is the drama and conflict within the group of friends when various things begin to create a divide among them. What ensues is, what some refer to, as a "love-pentagon" because different characters like each other, and it gets complicated.

From the start, Glasslip has been a methodical paced series, and it will certainly bore a lot of people, and apparently, from how much everyone hates the series, it bored a lot of people. Also, the characters are not always likable. However, to me, the series' slower pacing and realistically unlikable character actions made the entire series seem more realistic and believable. The drama could be heavy-handed at times, but they acted like real people with real problems, and not archetypes. People are jealous and do mean things to other people in a very passive aggressive kind of ways, although that is not to say that the characters are terrible people, but they make mistakes. The series certainly has its flaws with the ending making the entire series a little pointless, but Glasslip is a pure slice-of-life drama with a few elements of humor. On a positive note, the animation by P.A. Works is simply beautiful! At times, the series uses still frames to obviously save budget, but the creators are able to fit them in a creative enough ways. Due to how much everyone dislikes Glasslip, I can only recommend it to hardcore fans of P.A. Works.
*6.8/10*

Rokujouma no Shinryakusha!?, or Invaders of the Rokujyōma!? in the English, is an ecchi, and it probably has the most diverse cast of ecchi heroines which includes, a moe ghost, a princess from space, an attacker from an underground civilization, a magical girl, and the landlady of the main protagonist's apartment. Most of the aforementioned characters want the apartment Kōtarō rents for various absurd reasons, and thus crazy antics ensue! Even though the series does feature fanservice, it is surprisingly mild for an ecchi, and by the end, the series ends up being a platonic ecchi, even with a little character development. That being said, Rokujouma no Shinryakusha is still an ecchi and it has a ton of tropes. A few of the episodes were not as funny as they could have been, but overall, the series' humor was entertaining. The animation for the main cast is fine, whereas the background characters literally have no eyes, just mouths, which is weird. Ecchi fans looking for something a little lighter on the fanservice with a diverse cast, Rokujouma no Shinryakusha is a recommended fun watch. Otherwise, Rokujouma no Shinryakusha is probably not for you.

Akame ga Kill is a fantasy action shounen that follows Tatsumi, a swordfighter, who sets off to the Capital of the land to find a way to make money to save his poverty-stricken village. Things happen, and he eventually joins an assassin guild, named "Night Raid," that fights the corrupt government. After Tokyo Ghoul, Akame ga Kill is probably the most popular series of the summer, and it makes sense since Akame ga Kill is a by-the-numbers shounen with a few unexpected tweaks. Akame ga Kill contains many of the tropes of the shounen genre, both good and bad, yet the violence is dialed up a few notches and the characters lack plot armor, which means main characters die. These few tweaks to the formula actually make Akame ga Kill worth watching, at least for shounen and action fans. Yet, the series still contains some of the worst aspects of shounen like overly-dramatic male villains, fanservice, and a few really dumb moments. However, White Fox's animation is very solid for a shounen, and the action and humor are a lot of fun. The lack of plot armor (for both the heroes and villains) raises the series above typical shounen like Magi, and the new villainess, Esdeath, is one of the coolest villains of the season. The series is more than halfway through its 24 episode run, and once finished, I will probably review it in full. Also, even though my current rating is a tad lower than some might expect, if the series continues to improve, its final score is likely to be much higher.
*7.5/10*

Please note that my ratings for incomplete series, like Akame ga Kill, are often lower than usual, because the is series is only halfway through its full run.

Did you watch any of these series? Are you interested in any of them? Please comment below and let me know, and do not forget to check back Tuesday for the continuation of my Summer Anime Review.

Posted by James the Reviewer at 8:06 AM