This past summer has given us a surprising amount of high quality anime, ranging from one of the funniest series ever, to an almost Death Note like suspense thriller. For my summer anime review, I will briefly review each series and give it a score from one to ten. The reviews are ordered from worst to best, and I will provide a full review for several of the summer’s best anime like Zankyou no Terror, Gekkan Shoujo Nozaki-kun, Barakamon and a few others. 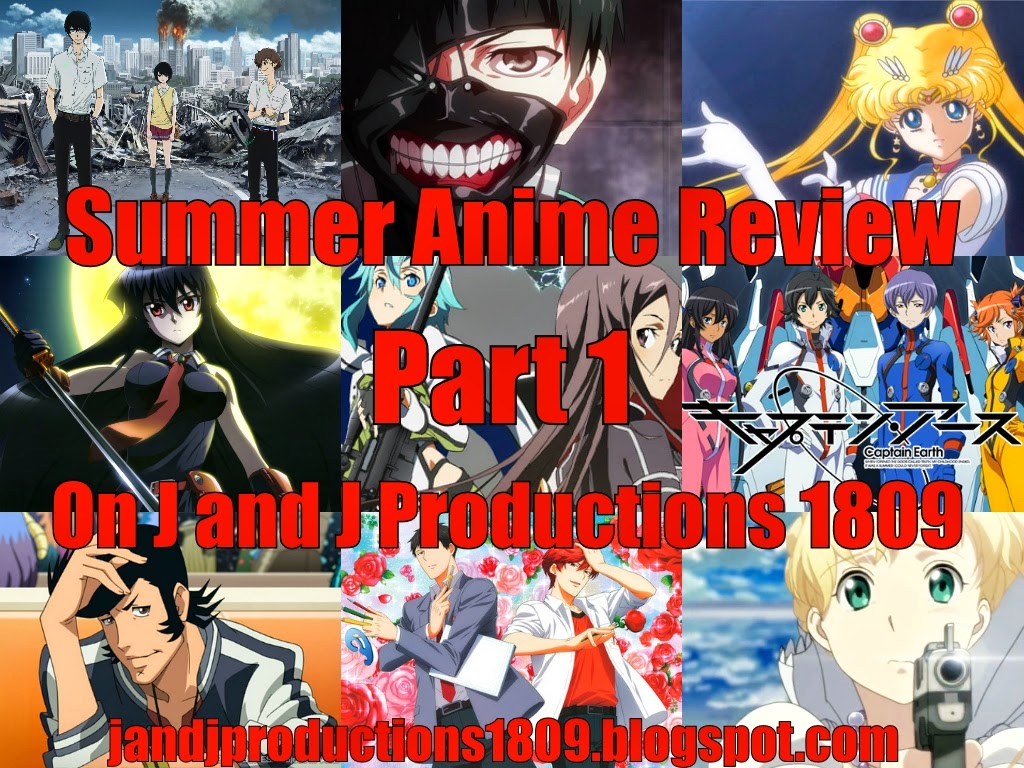 To preface my taste in anime, I enjoy just about anything and everything to varying degrees. Everything from dark dramas by Gen Urobuchi to high school comedies interest me, and even series filled with tropes can have their entertainment. That being said, characters, entertainment value, animation, and plot are among my most important qualities of a series, with a heavy focus on character. Also, if you are not familiar with my rating system, series that rate between 5.0-5.9 are generally considered to be okay at best, and only those who are extremely interested in the genre or concept should watch it. With a score between 6.0-6.9 are series that are worthwhile, yet to still flawed; if you are a fan of the genre, it is worth a try. Scores between 7.0-7.9 are series that have more strengths than flaws, and are generally worth watching if you have any interest in the genre, creative team, or concept. Also, Anichart.com is my source for plot summaries, and below are the series that I dropped during the summer.

"The story centers around Yuuki Akamatsu, a boy who joins the staff of his school's second newspaper. The editor-in-chief Ayaka Nikaidou immediately assigns him to the life (jinsei) advice column," where he works with three girls from various areas of study. In my summer impressions, Jinsei was my darkhorse contender for funniest comedy, and while it was certainly funny at times, Jinsei is strictly average in most respects. Generally the comedy is the generic, albeit funny, with crazy antics. Some episodes are funnier than others, and the moe character designs are appealing. However, due to the series not being released by any streaming service like Crunchyroll or Funimation, I had to watch a fansub, and while the fansub was good, I have not been able to find a fansub for the series after episode eight; therefore, I have not seen the entire series. That being said, the series is good enough for me to watch the remaining episodes if they are ever uploaded. Overall, Jinsei is not bad, nor is that good; just average.

If you remember from my review of the first episode, you might recall that Tokyo ESP was one of my picks for best anime of the summer, and let's just say that it failed to deliver. Long story short, it took its great concept and devolved into the worst aspects of the typical shounen. For my full thoughts on the series, check out my review by clicking here.

Sailor Moon Crystal, the highly hyped remake of the Sailor Moon franchise, which will be closely following the manga, unlike the original. Due to the bi-weekly release schedule, only 6 of the planned 26 episodes have been released. As with any remake of a beloved classic, many people were excited for the series, and it seems that some have been disappointed. Sailor Moon Crystal has been getting a lot of backlash from viewers, and one of the top complaints is the animation. While I agree that the 3D animation for the transformation sequences is unnecessary, Toei Animation's work on the rest of the series is adequate. Sure, the series looks dated, but the character designs are meant to reflex the manga, and the overall aesthetic is retro. Having not seen the original series when I was a kid, I have no nostalgic attachment, and the only reason that I watched the series was to become familiar with one of the classic anime. In terms of plot and characters, the series is simple and some of the more child oriented elements do standout. So far, I do think Tuxedo Mask is kind of cool. Overall, Sailor Moon Crystal is an entertaining enough watch, and thanks to the bi-weekly schedule, it is easy to keep up with.

Rail Wars carried a lot of hype before its release, because people apparently expected something more along the lines of the plot summary, which included terrorists trying to take over the transportation system. However, what we got was a fanservice ecchi series where all of the female characters are attracted to the main protagonist, Takayama. While the series does have some fun action sequences, it is ultimately in the ecchi genre, and has all of the usual flaws that the genre entails. Despite the mismarketing, for what it is, Rail Wars was constantly entertaining. Sure, it has many of the same fanservice jokes that you have seen before, but the characters were memorable and the animation is appealing. Every week, the series entertained me, even if it was dumb and clichéd. Also, both the opening and ending are great. Rail Wars is a guilty pleasure series through and through, and if you were expecting something different, it is certainly not for you.

Futsū no Joshikōsei ga Locodol Yattemita, or Locodol for short, is a difficult series to dislike. It follows two high school girls, Nanako and Yukari, from Nagarekawa, who become Locodol (local pop-idols) to promote their town. For some unknown reason, the series is listed under "Seinen" (adult male) and the manga was also published in a Seinen magazine, yet there is absolutely nothing overtly Seinen about the series. Locodol is cute, fun, and very moe, and honestly, there are no standout flaws in the series, except that it is entirely unremarkable in its narrative. It is a slice-of-life series about these two girls, along with the other members of the crew, and it has a little drama and some funny antics. The character development is mostly Nanako and Yukari becoming closer as friends. However, Locodol did serve an important purpose during the summer season. It was a nice palate cleanser of sorts to watch in-between the darker and more serious shows of the year. For slice-of-life and moe fans, Locodol is a pleasant and harmless watch with appealing animation and some good humor.

Did you watch any of these series? Are you interested in any of them? Please comment below and let me know, and do not forget to check back tomorrow for my review of Gekkan Shoujo Nokzuki-kun and Thursday for my continuation of the Summer reviews.