Doctor Who: Mummy on the Orient Express Review

After last week's semi-disaster, Doctor Who rebounds with yet another strong entry in "Mummy on the Orient Express." 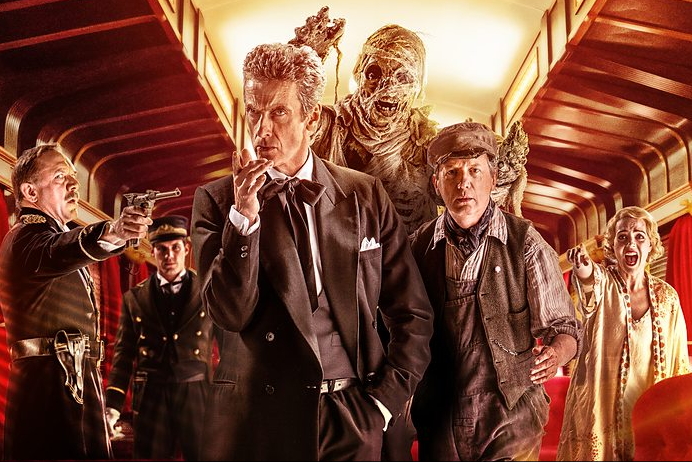 Taking place on the Orient Express in space, a mysterious mummy is seen by various passengers before they die, and once you see the mummy, you have exactly 66 seconds to live.

*Warning Spoilers are ahead*

In the wake of last week's events, the Doctor and Clara are on their last hurrah of sorts, with Clara apparently deciding to leave the Doctor's company after the adventure. However, by the end of the episode, that is not the case with Clara deciding to continue to travel with the Doctor. Considering that last week was somewhat of a screw up on the part of the writers, fixing the Doctor and Clara's relationship so quickly seemed like the best idea, although I am still questioning why the conflict was set up in the first place. Compared to how Clara has been characterized throughout the season until "Kill the Moon," her actions are a bit hasty, although you can chalk that up to a lapse in writing and an emotional outburst on Clara's part. In the end, everything is in place again, and I do have the feeling that something bad is going to happen to make the Doctor regret that decision.
Another aspect explored again in the episode is the Doctor's cold heart. While the previous two Doctors might have at least comforted those who are about to die, Capaldi's Doctor continues to be cold hearted and blunt, which is refreshing. However, Clara realizes that the Doctor is still trying to save people, but he is not going to lie to them and tell them that everything is okay, when it obviously is not.

Moving to the actual plot, "Mummy on the Orient Express" offers a fun homage to Agatha Christie's "Murder on the Orient Express." From the beginning of the mummy's mystery to the Doctor figuring out how to stop it, the mystery was a lot of fun to watch unfold, especially with the Doctor's mix of scientific deducing and Poirot like mystery solving. Everything about the Doctor trying to figure out what is going on glued me to the screen with entertainment. The mystery is not able to be solved by the audience, which is my only complaint about the episode in general. Conceptually, the train in space is rather unique, and while it does not make the most sense, it is a fun idea.

In terms of production value, "Mummy on the Orient Express" is yet another visually interesting episode of Doctor Who. Director, Paul Wilmshurst, does a superb job of bringing the steampunk-esque setting of the train in space to life. Clara looked particularly classy in the old fashion style, and everything else looked top notch. Even though the mummy itself is not as scary as it could have been, the makeup for it looked phenomenal, and very much like the old fashion mummy, except with blue skin. Using the on screen clock also added a degree of flare and urgency to the episode.

Another nice touch is the entertainer singing Queen "Don't Stop me Now." Apparently, the singer is a pop singer named Foxes (never heard of her), and after meeting the Doctor Who production staff, she ended up making a cameo in the episode. In fact, "Don't Stop me Now" is one of my favorite Queen songs, so I recognized it immediately.
Towards the end when the Doctor finally figures out how to stop the Mummy, it continued to feature the Doctor dealing with soldiers. In many ways, the Doctor did essentially the same thing to stop the Skovox Blitzer in "The Caretaker," and instead of being a lazy reuse of previous material, the parallel seemed to be intentional. Throughout the season, the Doctor continues to show his prejudice against soldiers. Hopefully this recurring theme will come to fruition at the end of the season, with something most likely involving Danny.
Even though "Mummy on the Orient Express" featured Clara's epiphany about wanting to travel with the Doctor, what made this episode work is the fun and unique concept, and all around solid execution.

Overall: 8.3/10- Visually interesting, conceptually unique, and all around entertaining, "Mummy on the Orient Express" is a return to form for Doctor Who and one of the better episodes of the season thus far.

Mummy on the Orient Express review by Gypsy King

What did you think of the episode? Please comment below and let me know.

Did anyone else notice this reference to a previous Matt Smith episode.

Posted by James the Reviewer at 7:06 AM