Doctor Who: Kill the Moon Review

"Kill the Moon," a Doctor Who episode that nearly left me speechless.

Wow, just wow. The writers on Doctor Who have really outdone themselves this time with "Kill the Moon."

Since trying to discuss the episode without going into spoilers is nearly impossible, you have been warned that massive spoilers are ahead. 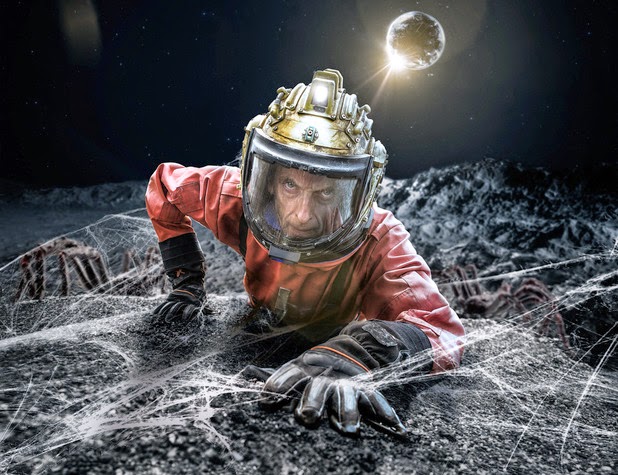 The moon is a freaking egg. Wrap your head around that for a second. The moon is a BLOODY FREAKING EGG! Seriously!? Is that the best idea the writers could have come up with? Come on Moffat, why did you let Peter Harness' script happen? Why!?

Before discussing everything wrong with this episode, I will start off with the positives.

In terms of acting, Capaldi and Coleman were superb. Clara's big meltdown at the end of the episode was the best part of the entire episode, and one of the best acted scenes of the season. After the setup last week about Danny telling her to come to him if she is ever pushed to her limits, the final scene worked brilliantly.

The first half of the episode was a lot of fun for the most part with the space-spiders being a legitimate foil to the TARDIS crew. The spiders did not produce much suspense, but they were fine. In general, the special effects were top notch for the series without any glaringly obvious low budget effects.

One of my favorite parts of the episode was the Doctor's line about you can't kill Hitler in the past, but there are also important moments in the future that cannot be changed either, which is something that a lot of time-travel ignore. Think about it. The future is someone else's past too.

Another funny meta-joke is the reference to Tumblr, and the astronaut mentioning that her grandmother used to post things to Tumblr. Considering the large following that Doctor Who has on Tumblr, it is a funny reference for the fans.

Well, that is just about everything positive that can be said about the episode, and before continuing, please join me in a collective headdesk and facepalm.

Aside from the insanity of the moon being an egg, the episode had to jettison all believability and logic of the situation out into the darkness of space. The moon being a giant egg is crazy for sure. However, what made it bad is the entire execution of the episode after said reveal. Doctor Who has never been the most logical series out there, but this episode makes "Moffat Space Magic" seem realistic.

Let's start with the moon creature laying an egg after hatching. For one, the egg is roughly the size of the previous moon, just slightly smaller. However, how did the creature produce an egg larger than its size? Chicken eggs are significantly smaller than the chicken that laid said egg; that is common sense!

Moving on to another flaw, Clara is a massive b*tch to democracy. After struggling about whether or not to nuke the creature, Clara asks the entire world to turn off their lights if they want to kill the creature, or turn them on if they want to save the creature. For one, not everyone speaks English (although a translation could have been transmitted). Second, a lot of people would be asleep, thus unable to receive the message and "vote." Third, to turn off that many lights, the cities would have to shut down all of the city lights, which is not easy to do in 45 minutes.

With those illogical points aside, Clara asked everyone to vote, yet she ignored the vote entirely! She might as well have said "Screw democracy!" because she essentially became her own autocracy (single rule) by going against the decision of the entire freaking world! And she did it in completely underhanded and childish way by pressing the button right before the boom went off.

Another problem with the situation is that Clara and Courtney should not have a hand in deciding what happens. If this is indeed an important point in human history, neither Clara nor Courtney are from the time period, so Lundvik is the only person with the right to make the decision in the first place. However, throughout the series, the Doctor and his companions have made crucial decisions throughout history, so I can almost let that point slide. What did bother me is how easily Clara and Courtney decided that the creature should be saved. Sure Courtney is a dumb kid, but Clara should have at least struggled a little more with possibly killing every person on the planet (her future self probably included).

Yet another problem is not with the alien eggs itself, but rather the annoying Courtney. In general, kid actors in movies and television detract more than they add, and Courtney is certainly another example of an annoying kid getting in the way. She did absolutely nothing of any importance in the story. Her disinfectant spray was the only thing that she contributed to the episode.

"Kill the Moon" is an infuriating episode. Even if you hate some of the outlandish plot twists and antics of the Smith era, nothing during those seasons is as daft, nonsensical, and plain silly as what just happened in "Kill the Moon." The episode certainly had a nice sentiment with the idea of creating an event that launched humanity to the stars, but the execution is horrendous. However, to my utter shock when reading various reviews, a lot of people are raving that "Kill the Moon" is the best episode of the season. I will give it to everyone that "Kill the Moon" had some great ideas and moments, but man it really jumped the shark. If you do like the episode, that is fine.
Overall: 5.7/10- Despite my many massive problems with "Kill the Moon," it did have high enough production values, strong performances, and intriguing ideas to prevent it from being a complete mess. That being said, the episode is unbelievably dumb!

Posted by James the Reviewer at 7:37 AM