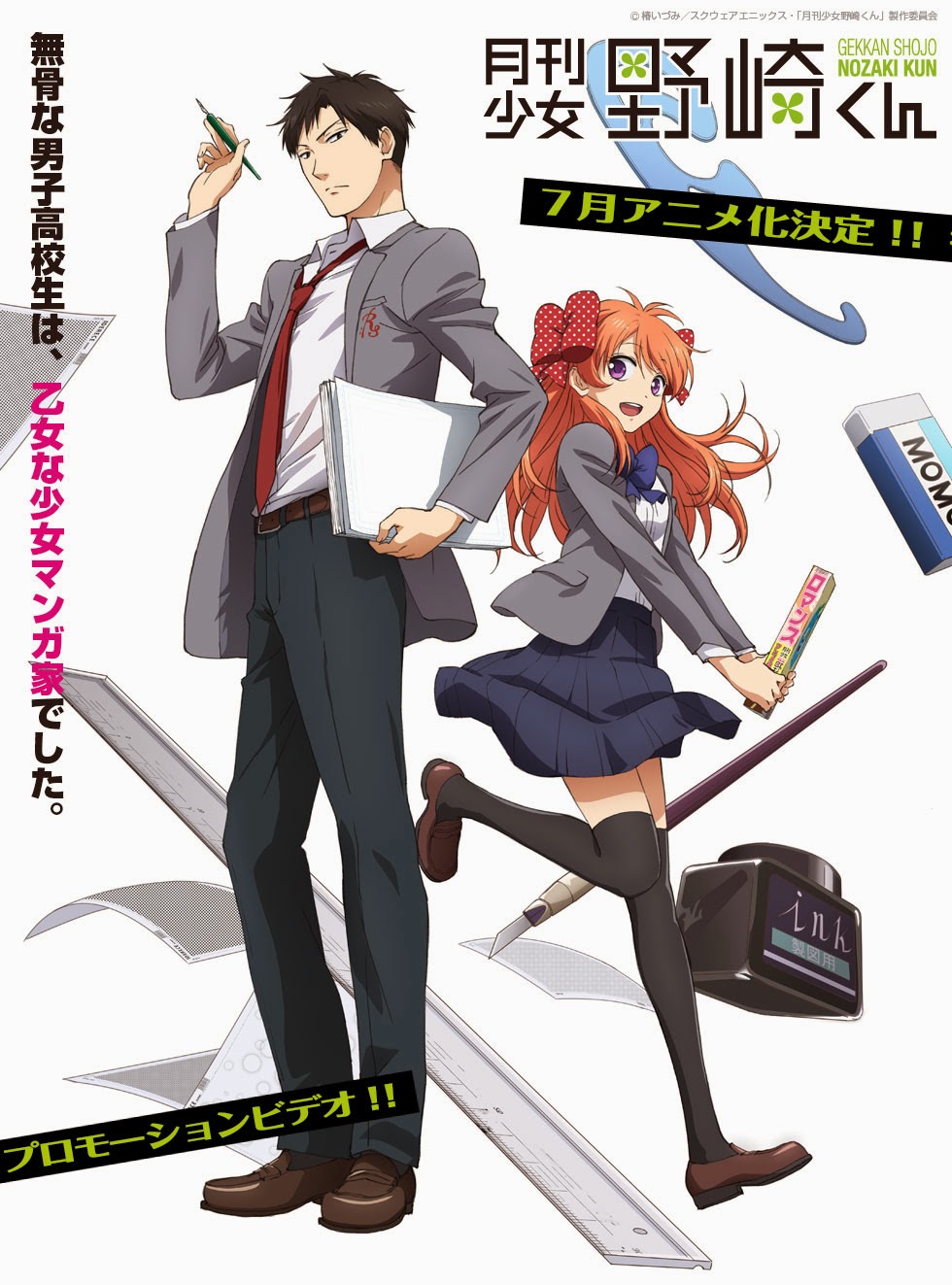 Plot: 9.0/10- Unlike Clannad or Toradora, which are both a drama with heavy comedic elements, Gekkan Shoujo Nozaki-kun is intended to be a pure sitcom, and thus the plot's main goal is to create comedic situations for the characters, and it most definitely succeeds.
Almost every episode creates a situation, which either parodies classics tropes and cliches, or causes sets up the perfect situation for comedy. Even though the series is technically a romantic comedy, the romantic element is very light to make way for the great humor, because there are no true romantic moments during the series.

Characterization: 9.7/10- Gekkan Shoujo Nozaki-kun has the best cast of comedic characters of any anime, even rivaling my previous favorite, Ouran High School Host Club.
Despite the title, Chiyo Sakura is the true main character of the series, and she is a very fun and likable character. She has a crush on Nozaki, yet he is completely oblivious of the fact. Her interaction with Nozaki is often hilarious and cute at times. 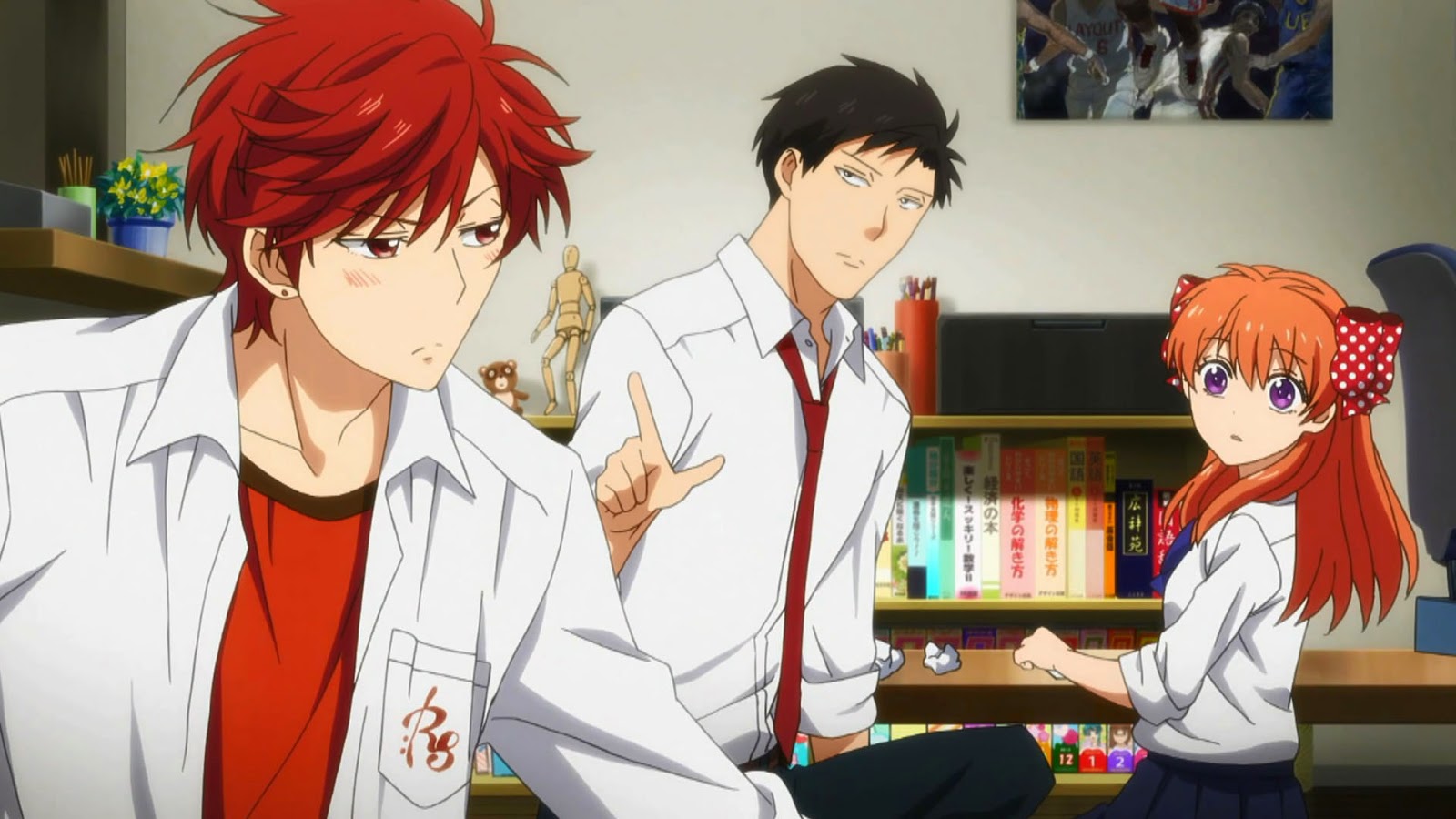 Umetarō Nozaki, often referred to as Nozaki-kun ("kun" being the honorific used for male friend) is the writer of the popular shoujo manga (girl's comic), Let's Fall in Love, which he publishes under the name Sakiko Yumeno. However, no one except for his friends that help with the manga actually knows he writes the manga. To Nozaki-kun, almost every situation involving high school life is inspirational material for his manga. However, he is often oblivious to the awkward situations he creates when trying to research. Also, as many of my writer friends can attest, he uses his friends' characteristics for the basis for the characters in his manga, which often results in even more hilarity. Overall, Nozaki-kun is nice, albeit oblivious, guy, who is almost a parody on the typical male protagonist, while still being a real character in the series.

While the main characters are great in their own right, it is the supporting cast that ultimately delivers most of the laughs, including, Mikoshiba, Seo, Kashima, Hori, and Wakamatsu. They are all fantastic characters with hilarious quirks, and they often defy the usual archetypes. Their interaction almost makes the series what it is.

Acting: 9.7/10- Despite being in Japanese, the entire cast seemed to have excellent chemistry and comedic timing. They all played off of each other perfectly.

Art Style: 8.8/10- While not exactly remarkable, Dogakobo's animation is surprisingly detailed for a comedy series. The character designs are pleasant to look at, and the exaggerated animation for the comedy blends well. Also, there is no fanservice.
Soundtrack: 7.2/10- Yukari Hashimoto and Media Factory's music is nothing special, but when the need arose, it fit the scenes well with fun comedic themes.

Humor: 10/10- Almost every episode had me in stitches from laughter! Pure comedy anime are not all that common, and the good ones are few and far between, but Gekkan Shoujo Nozaki-kun hits the mark almost every time.
Of course, humor is subjective, so you might not enjoy the series' brand of humor. That being said, the humor ranges from hilarious misunderstanding, slapstick, parody, and awkward situational humor, all of which is clean humor, without any fanservice jokes. The humor in the series is clever enough as to not rely on the same on ecchi humor that we have seen a thousand times. Also, being familiar with the shoujo makes some of the humor even better, and watching this summer's Ao Haru Ride (Blue Spring Ride) along side Nozaki-kun, made the occasional manga parodies even funnier, thanks to the added context.

Opening and Ending: 8.8/10- The series' opening is perfectly fitting of the series. It is fun, fast pace, and the visuals show all of the principal characters, as well as some of the recurring gags. The ending fits the series well, and it is fun to listen to at times.

Non-Otaku Appeal: Due to the lack of a dub and occasional reliance on parody, the viewer needs to at least have a rudimentary of anime before watching the series. However, if you are a writer, there should be a surprisingly amount of appeal.
Entertainment Value: 10/10- Gekkan Shoujo Nozaki-kun was the highlight of every week during the summer season. Each episode entertained me from beginning to end; it was pure entertainment at its finest.

Overall: 9.4/10- Gekkan Shoujo Nozaki-kun is the funniest comedy anime that I have ever seen; simple as that. The characters are lovable, the antics are always hilarious, and the humor hits the mark. It is the best anime of the summer, hands down. Of course, humor is subjective, and if this is not your type of comedy, then the series might not resonate with you as much.

Closing comments: If you are a writer, a fan of comedy, or just want to laugh, do yourself a favor and watch Gekkan Shoujo Nozaki-kun, you will not regret it.

You can watch the first seven episodes on Hulu by clicking here, and if you want to watch the full series, or live outside of the US, you can click here to watch the series on KissAnime.com.

Also, if you have reviewed this anime, leave a comment with a link to your review and I will post it here (providing it does not contain any explicit content).﻿
If you want to contact us or have any questions please send an e-mail to johnstarslayer@gmail.com.

Posted by James the Reviewer at 6:58 AM