Tokyo ESP, Japan's version of the X-Men, and if you remember my review of the first episode, it was one of my top picks for best anime of the summer, but does it live up to the my prediction? 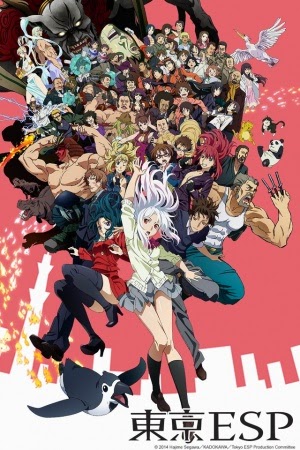 The Bad: Boring at times, Major drop in animation, Too ridiculous and dumb at times, Devolves into shounen clichés, Ugly character designs,

Plot: 4.8/10- After the intriguing first episode, the series quickly devolves into a typical shounen series with training sequences and goofy martial arts masters.

The series has some very interesting ideas on the surface, much like the X-Men franchise, yet the execution is where it fails. Seeing Japan's version of superheroes is cool, but it pales in comparisons to the real thing, because it lacks depth.
Characterization: 5.0/10- The main protagonist, Rinka Urushiba, is a mostly typical character, and while there is nothing wrong with the character, she is nothing particularly that great either. As for the rest of the characters, they are okay. Some of them are clichéd, while others have similar character arcs to what I have seen in superhero comics. Some of the characters are far too absurd and goofy, and did not fit within the rest of the series.

Acting: 6.5/10- Nothing about the Japanese cast seemed bad, nor did anything standout as great.

Art Style: 3.2/10- The first and last episodes aside, the animation is fairly mediocre. However, my biggest problem with the series in general is the appalling character designs and character animation. Something about how the characters look bothers me, and it made watching the series a chore at times. Honestly, I cannot explain exactly why, but it was just hard to look at.

Soundtrack: 7.3/10- Tokyo ESP's soundtrack is one of its stronger elements with a lot of fun themes, even if they are not particularly memorable. Some of the themes even sounded like the old X-Men series.

Opening and Ending: 7.2/10- Tokyo ESP's opening is fairly standard and unremarkable, whereas the ending is quite good, with a fun hard rock song.

Non-Otaku Appeal: If the series was actually good, the similarity to western superheroes would have given it great crossover potential, but alas, it is not recommendable.

Entertainment Value: 4.3/10- Even though the first two episodes were some of the most entertaining of the early summer season, when it started to devolve into standard shounen tropes, the series bored me to death at times. What it lacked is the fun energy that even cliché shounen series have that make them at least entertaining.

Overall: 5.6/10- Tokyo ESP had a lot of potential, yet due to the ugly animation, shounen clichés, and rehash of western superhero themes wrapped in anime tropes, it failed to deliver much of anything worthwhile. It is just painfully average in almost every respect, but not bad per se.

Closing comments: For a superior and far more mature story set in the same universe, check out Ga-Rei: Zero. Otherwise, only watch if the concept is that interesting to you or you have read the manga, but you are better off reading an X-Men comic.

Posted by James the Reviewer at 7:20 AM