Aldnoah.Zero, the perfect combination between the war and sci-fi genres, and one of the best series of summer 2014. 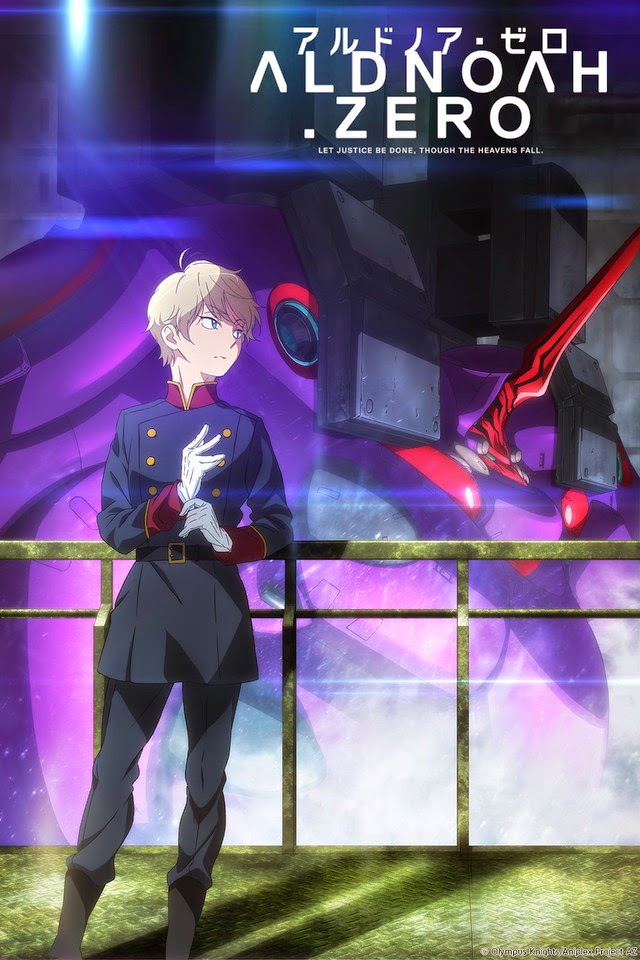 Aldnoah.Zero (yes, the period is in the name) is from the creative geniuses of Gen Urobuchi (Fate/Zero, Psycho-Pass, Madoka Magica), Ei Aoki (Fate/Zero, Kara no Kyoukai, Ga-Rei Zero), and Hiroyuki Sawano (Attack on Titan, Kill la Kill), and it does not disappoint.

Unlike most 24 episode series, Aldnoah.Zero split its episodes into two seasons, with the first airing July and September of this year, whereas the second half will be airing in January. However, the first half does tell a nearly complete narrative, thus the reason for reviewing the series in parts.

Plot: 9.6/10- After a somewhat slow starting pace, Aldnoah.Zero builds the sci-fi world it inhabits excellently. Tonally, Aldnoah.Zero is a war story combined with a sci-fi invasion narrative, except what makes the series different is that the invading force is also human, albeit those that colonized Mars. Since both sides of the war are human, the viewer can connect with and understand both sides of the war more easily.

Throughout the series, there are plenty of twists and turns to keep things interesting, with the final episode of the season being one of the best anime episodes of recent memory. Due to the final episode's high quality and shock value, my overall score is literally raised a few tenths of a point. As usual with a Gen Urobuchi work, the series discusses complex themes at times, particularly war. However, his conflict of ideals is not quite as present in Aldnoah.Zero as it is in his previous work, not to say that is a bad thing though.

Characterization: 7.8/10- Aldnoah.Zero's characters is one of its weaker aspects, although they are mostly well rounded, and apparently, I like the characters more than most.

Inaho Kaizuka is, at first, a very distant and stoic character, who never shows emotion. However, he is a strategic genius, who uses his smarts to win difficult battles. Unlike many strategic characters, he is never bombastic or over-the-top, but rather always quiet. Also, his plans are rarely, if ever, too outlandish to cause the viewer to suspend their disbelief.

Slaine Troyard is an earth born human, who crashed landed on Mars, and was then saved by Princess Asseylum. He became a close friend of the Princess, and he is entirely devoted to the Princess and discovering her assassins. Of the main characters, Slaine is most skillfully developed, and he has the most emotional character arc.

*Episode 3 Spoiler* It is revealed in episode three that the Princess is, in fact, not dead. Princess Asseylum Vers Allusia, often referred to as Asseylum, is a likable character who only desires peace between earth and Vers. Her character type is not the most original, but she is used effectively in the plot. *End Spoilers*

Aldnoah.Zero has quite a large supporting cast with several of the characters receiving some solid character development, while others range from likable to occasionally forgettable. Even though the series does not have a consistent antagonist, Vers’ commanders often have understandable motivations.
Action: 8.2/10- Aldnoah.Zero is not necessarily an action series, yet there is quite a lot of action. Being a mecha series, most of the action takes place between large mecha in military situations. Aside from the CGI animation used, the action sequences are exciting and Inaho's strategies add an intellectual element to the battles. My only problem with the action is that it was difficult to see what was happening during the final battle.

Acting: 9.0/10- Natsuki Hanae as Inaho is suitably stoic, Kenshō Ono as Slaine really sells the emotional journey the character goes through, and Sora Amamiya as the Princess gives her a lovable charm. Overall, everyone does a fine job.

Art Style: 9.1/10- A-1 Pictures and TROYCA's 2D animation for the series is simply beautiful. The character designs are flawless, and everything is pleasantly fluid. However, the series uses CGI (computer generated images), aka 3D, animation for the mecha. While using 3D for mecha and vehicles is common today, it does not change the fact that I dislike the combination; that being said, the 3D is better than most.

Soundtrack: 9.9/10- Just like Hiroyuki Sawano's work on Attack on Titan and Kill la Kill, his score for Aldnoah.Zero is near perfection. Each of the tracks and insert songs add to the intensity and involvement of the viewer, particularly during action scenes. The song "Breathless" is one of my new favorite songs to listen to now. The only flaw that is several of the tracks sound almost exactly the same as Attack on Titan's score, but hey, why mess with perfection?

Opening and Ending: 9.1/10- Aldnoah.Zero's opening, "Heavenly Blue," by Kalafina, is an excellent song, aided by top notch visuals. The first ending is fine, albeit nothing particularly noteworthy, whereas the second ending uses an excellent song, which was previously used as an insert song in the series.

Non-Otaku Appeal: If Aldnoah.Zero was dubbed, I could freely recommend the series to anyone interested in sci-fi drama and action. There is nothing weird or off putting present.

Entertainment Value: 8.3/10- Aldnoah.Zero is not the type of series to keep you glued to the screen in excitement, with a few episodes being a tad on the slow side. However, when the series picks up on either the action or drama, it really hits the mark.

Overall: 8.5/10- Thanks to a unique premise, superb execution, and a flawless finale, Aldnoah.Zero is the beginning to, possibly, one of the most interesting sci-fi dramas in recent memory. However, if something serious and thought provoking is not your style, and you prefer something more action-packed and funny, then Aldnoah.Zero is probably not for you.

Closing comments: Needless to say, season two Aldnoah.Zero in January is at the top of my must-watch-list: "Let Justice be Done, Though the Heavens Fall."

Posted by James the Reviewer at 6:22 AM