The Good: One of the greatest chase scenes of all time, All-Star cast of amazing actors including Steve McQueen, James Garner, Charles Bronson, James Coburn and many others, The performances in the movie were amazing it gave you connection with character and made you want them succeed, Second best war movie of all time, The movie was humorous yet serious when it needed to be,
The Bad:


Plot: The following plot summery is copied from Wikipedia.com.
Having wasted enormous resources on recapturing Allied prisoners of war (POWs), the Germans move the most determined to a new, high-security prisoner of war camp. The commandant, Luftwaffe Colonel von Luger, tells the senior British officer, Group Capt Ramsey, "There will be no escapes from this camp." Ramsey replies that it is their duty to try to escape. After several failed escape attempts on the first day, the POWs settle into the prison camp.
Gestapo and SS agents bring Squadron Leader Roger Bartlett (RAF) to the camp and deliver him to von Luger. Known as "Big X," Bartlett is the principal organizer of escapes and Gestapo agent Kuhn orders that he be kept under the most restrictive permanent security confinement, which Col. von Luger, disgusted by the Nazis and the SS, only makes a "note" of, treating the command with complete contempt. As Kuhn leaves, he warns Bartlett that if he escapes again, he will be shot. Bartlett is then placed with the rest of the POWs, rather than the restrictive holding that Gestapo agent Kuhn had demanded.
Locked up with "every escape artist in Germany", Bartlett immediately plans the greatest escape attempted—tunnels for breaking out 250 prisoners. The intent is to "confuse, confound and harass the enemy" to the point that as many troops and resources as possible will be wasted on finding POWs instead of being used on the front line. Watch the movie to see what happens next.


Plot: 9.6/10- The plot is based on a true story of POW's escaping from a German prison camp and it makes a great plot for a movie.


Action: 8.4/10- The movie was not action packed until the end were there was an amazing chase scene.


Comedy: 8.5/10- The movie was surprisingly funny in parts of the movie.


Overall: 9.4/10- Overall The Great Escape is one of the best war movies ever made and great classic movie.


Closing comments: If you like watching good movies you can't go wrong with The Great Escape. 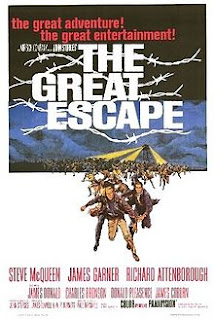 Posted by James the Reviewer at 8:41 AM