Something You Didn't Know About Captain America: The First Avenger.

Warning Spoilers Ahead! If you have not seen Captain America: The First Avenger do not read the post! You have been warned! 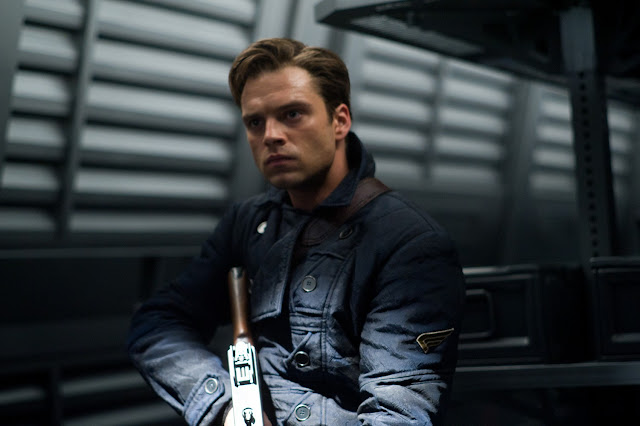 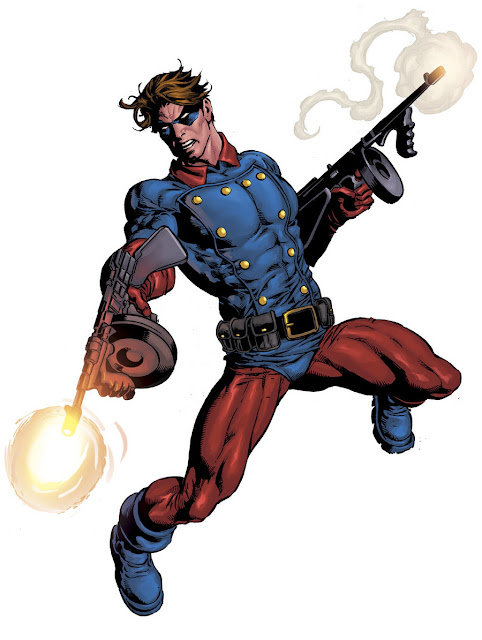 Bucky is not dead!
You may be wondering why we think this. It is because in the comics Bucky comes back 60 years later as the characters Winter Soldier. We assume that the movies are staying close to the original comic book. If so he most likely will be in the up coming Captain America in 2014. We really didn't think about making post about Bucky until we read a post by Jamie at throughtwoblueeyes because it is common knowledge to fans of the orignial comics. If you want to more details read Bucky's history below.
The following is copied from Wikipedia.com.
Bucky's History.
Barnes (named after James Buchanan, the 15th President of the United States), was born in Shelbyville, Indiana in 1925. He is an orphan, the son of a soldier killed in training at U.S. Army Camp Lehigh in Virginia just before the United States' entry into World War II. As a result, he is unofficially adopted by the camp as a mascot. Nicknamed "Bucky," he takes to wearing a uniform and becoming savvy with the ins and outs of military life, even though he is a teenager. It was at Lehigh that he meets and befriends Private Steven Rogers, who by all appearances is the clumsiest soldier in the camp. This was at the same time that reports of the then-mysterious Captain America begin to appear in news magazines, and Barnes eagerly devours the accounts of this new hero.
In 1940, Bucky accidentally walked in on Rogers changing into his uniform, thus discovering his friend was Captain America and insisted that he join him. He underwent extensive training and was assigned to be Captain America's partner. The military justified putting a 15-year-old in harm's way by using him as a symbol to rally the youth of America (as revealed in Captain America vol. 5, #12, Dec 2005). They fight the Red Skull together, and Captain America accepts Bucky as his partner.Together, Captain America and Bucky fight Nazis both at home and abroad, as a duo and as part of the superhero team known as the Invaders, fighting Master Man in their first mission. Barnes also teams up with the sidekicks of other heroes in a group called the Young Allies. Additionally, Bucky was retconned in 1976 as the organizer of the flashback World War II super-team the Liberty Legion, set between the formations of the Invaders and the post-war All-Winners Squad. He was also briefly one of the Kid Commandos at this time. Bucky served as an advance scout for Captain America and the Invaders, often being assigned tasks that none of the heroes could be seen doing.
In the closing days of World War II in 1945, Captain America and Bucky tried to stop the villainous Baron Zemo from destroying an experimental drone plane. Zemo launches the plane with an armed explosive device on it, with Rogers and Barnes in hot pursuit. They reach the plane just before it takes off. Bucky unsuccessfully tries to defuse the bomb, and it explodes in mid-air before reaching its intended target. He is believed to have been killed in action, and Rogers is hurled into the freezing waters of the North Atlantic. Rogers' body, preserved in suspended animation in a block of ice, is found decades later by The Avengers when the Grandmaster was defeated.
It was only in modern times that Captain America would learn that Bucky had a sister, Rebecca, whom he met at a veterans Christmas celebration. Bucky also had one notable post-mortem appearance when the Grandmaster challenged the West and East Coast Avengers for the destruction of the universe, apparently resurrecting long-dead friends and foes for them to fight. Captain America battled Bucky, whom he defeated, and the apparitions disappeared. 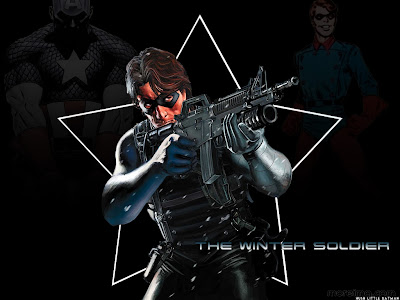 After the plane explodes, General Vasily Karpov and the crew of a Russian patrol submarine find Bucky's cold-preserved body, minus one arm. Bucky is revived in Moscow, but suffers brain damage with amnesia as a result of the explosion. Scientists attach a bionic arm, upgrading it every time technology improves. 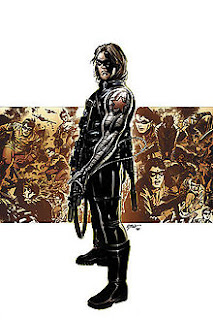 Programmed to be a Soviet assassin for Department X, under the code name the Winter Soldier, he is sent on covert wetworks missions, i.e. missions involving assassination, becoming increasingly ruthless and efficient as he kills in the name of the state. While a Soviet agent, he also has a brief relationship with The Black Widow. The Winter Soldier is kept in a cryogenic stasis when not on missions, and as a result has aged only a few years to a young adult since the closing days of World War II. In 1968, the Winter Soldier was to kill Professor Zhang Chin, whom he had met in WWII. Unfortunately, he was pinned down by an intangible being called The Man with No Face, though he was able to escape. On assignment in the United States in the 1970s, he suffers a breakdown and goes missing for days after assassinating his target.It has also been revealed that as the Winter Soldier he aided in Wolverine's escape from the Weapon X laboratory and later murdered Wolverine's wife Itsu.
In the present day, the Winter Soldier seemingly kills the Red Skull and Jack Monroe (Nomad) under orders from former Soviet general Aleksander Lukin (Karpov's former protégé). The Soldier launches a terrorist attack on Philadelphia, Pennsylvania, killing hundreds, and charges the Cosmic Cube which Lukin sent him to retrieve. He kidnaps Sharon Carter, an agent of the international espionage agency S.H.I.E.L.D. and a former lover of Steve Rogers (Captain America). Upon her rescue, Carter tells Captain America the Soldier looked like Bucky. S.H.I.E.L.D. chief Nick Fury confirms the Winter Soldier's existence, but cannot ascertain his identity.
Captain America tracks down and confronts the Winter Soldier. Upon gaining control of the Cube, he tells the Soldier, "Remember who you are". Regaining his memories, Bucky becomes overwhelmed by guilt over his past actions, crushing the Cosmic Cube and teleporting away.
He reappears shortly afterward in London, England, where he helps Captain America fend off a terrorist attack. He asks Nick Fury for employment and new equipment following the loss of his bionic arm. Following the events of the superhuman Civil War, the Soldier helps Fury plan the escape of an arrested Steve Rogers. Before the plan can be implemented, however, Rogers is assassinated.Considering registration architect Tony Stark (Iron Man) as ultimately responsible, the Soldier plans to kill Stark in revenge. Deducing that Stark will oversee the appointment of a new Captain America, the Soldier steals Captain America's shield from S.H.I.E.L.D. agent Black Widow (his former lover while brainwashed in the Soviet Union) so that it cannot be handed down.Ultimately, he heads to Kronas's headquarters, where Lukin reveals he is the Red Skull and has the evil psychiatrist Dr. Faustus attempt unsuccessfully to brainwash the Winter Soldier. 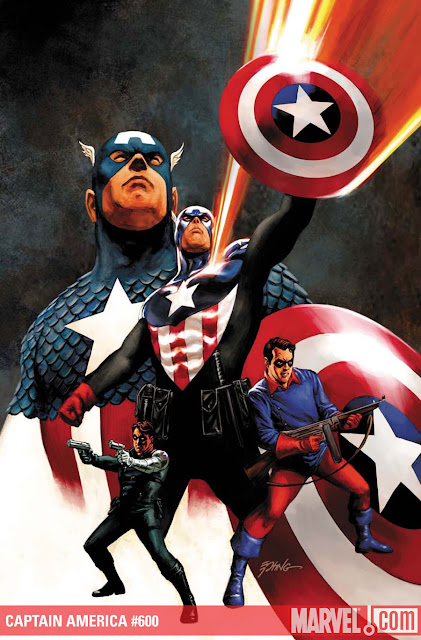 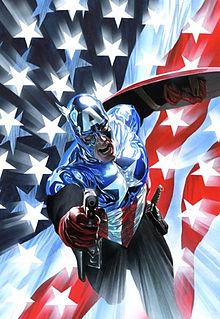 A still-teenaged Barnes is transported from 1941 and appears in the 2008 Avengers/Invaders miniseries alongside his fellow Invaders when a time travel incident takes them from a World War II battlefield to the present-day Marvel Universe, where they encounter both the Mighty Avengers and New Avengers. At the conclusion of Avengers/Invaders #4, while attempting to break out of the S.H.I.E.L.D. helicarrier, which he believes to be a German base, Barnes encounters his future self dressed as Captain America. During this meeting, the future Barnes attempts to change his history by telling his past self to abandon the missile that he was 'killed' trying to disarm, without ever telling his younger self his true identity. Barnes decides to let his life turn out the way it should after witnessing the devastating risks involved in changing history.


If you have any questions please ask.﻿