Since Christmas is coming up soon we decided to review one of our favorite Christmas movie Home Alone.
Remember that the score for the movie is relative to other family comedies and not action movies.


The Good: Lots of hilarious gags and physical humor, A few very memorable and hilarious moments,


Plot: The following plot summery is copied from Wikipedia.com.
The McCallister family prepares to spend Christmas with Peter and Frank's brother Rob in Paris, gathering at Peter and Kate's home in a suburb of Chicago the night before their flight. Eight-year-old Kevin, their youngest son, finds himself the subject of ridicule from his siblings and cousins. After getting into an argument with his older brother Buzz, he is sent to the third floor bedroom of the house, where he wishes his family would disappear. During the night, a power outage resets the alarm clocks and causes the family to oversleep. In the confusion and rush to reach the airport on time, Kevin is left behind and the family does not realize it until they are already airborne. Once in Paris, his mother and father desperately try to book a flight home.
Meanwhile, Kevin wakes up to find the house empty and is overjoyed to find that his wish came true. He takes Buzz's life savings, practices shooting with Buzz's BB gun, jumps on the bed, watches a gangster film, and eats a large amount of junk food. However, he finds himself scared by the appearance of the Chicago Police Department called by his parents to check on him, his next door neighbor "Old Man" Marley, who was rumored to have murdered his family many years earlier, and the appearance of The Wet Bandits, Harry Lyme and Marv Merchants, who are breaking into other vacant houses on the block. Watch the movie to what happens next.


Plot: 7.1/10- The plot is lot better than other family comedies and sets up well for the humor.


Soundtrack: 7.5/10- Many great classic Christmas song were used in movie which makes it great.


Comedy: 8.5/10- The movie is funny and is sure to keep you laughing for most of the movie.

Overall: 8.0/10- Overall Home Alone is a fun and funny Christmas classic that anyone can enjoy.


Closing comments: If you want to watch a good Christmas movie or just a good family comedy you can't go wrong with Home Alone. 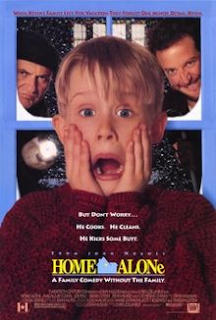