The Avengers Guide Part 9: 5 Avengers We Want in the Sequel.

The Avengers Guide Part 9: 5 Avengers We Want in the Sequel.
Sorry for not posting this yesterday. I lost internet and couldn't post it.
This part of The Avengers Guide is about 5 Avengers characters from the comics that we want in a possible Avengers sequel.
Some of the following is from Wikipedia.com. 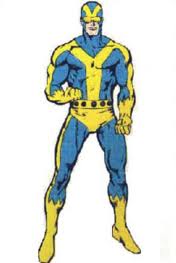 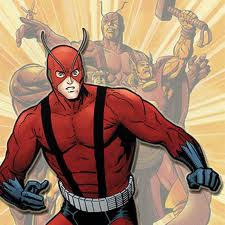 Hank Pym aka Ant-Man, Giant Man, Goliath and Yellow Jacket was one of the founding members of The Avengers.
Powers and abilities
Henry Pym is a scientific genius with a Ph.D in biochemistry, along with expertise in the fields of quantum physics; robotics/cybernetics; artificial intelligence, and entomology. The character discovered the subatomic "Pym particles" that enable mass to be shunted or gained from an alternate dimension, thereby changing the size of himself or other beings or objects; and is the creator of the robot Ultron.

After constant experimentation with size-changing via ingested capsules and particle-filled gas, Pym is eventually able to change size at will, and mentally generate Pym particles to change the sizes of other living beings or inanimate objects. Pym retains his normal strength when "ant" size, and possesses greatly increased strength and stamina when in "giant" form, courtesy of the increased mass. Pym’s costume is synthetic stretch fabric composed of unstable molecules and automatically adapts to his shifting sizes.

The character also uses a cybernetic helmet for achieving rudimentary communication with ants and other higher order insects. As Yellowjacket, Pym wears artificial wings and has bio-blasters called "stingers" built into his gloves. Pym also carries a variety of weaponry, provisions, and scientific instruments, which are shrunken to the size of microchips and stored in the pockets of his uniform. 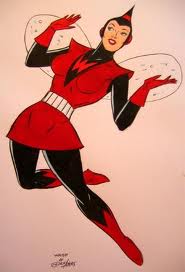 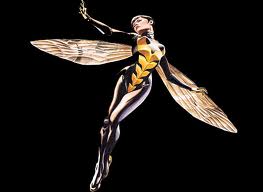 Wasp is also one of the foubding members of The Avengers and wife of Hank Pym above.
Powers and abilities
Making use of the cellular implantation of sub-atomic Pym particles, the Wasp possessed the power to alter her physical size, causing her body's mass to be shunted to or gained from an alternate dimension known as Kosmos. She was able to shrink to a minimum of several centimeters or grow to a maximum of several hundred feet. Smaller or larger sizes were possible but the exertion began to put a strain on her body. Initially, these abilities stemmed from use of a Pym particle gas released from special capsules, and later biochemical augmentation by Henry Pym. Over time, however, her body absorbed enough particles to cause cellular mutation due to repeated exposure to Pym particles to allow her to alter her size at will.
At miniature size, her strength level increased as her body's mass was compacted. At giant size, her strength and endurance increased geometrically with her height, reaching superhuman levels. Despite the advantages of giant size, Janet usually preferred to remain the diminutive Wasp, calling on her growth power only in times of extreme emergency.
At miniature size, the Wasp grew a pair of translucent insect wings from her back, a result of genetic modifications provided by Hank Pym. These granted her the power of flight, at speeds up to 40 mph (64 km/h).
The Wasp was able to harness and augment her body's natural bio-electric energy, releasing it from her hands in powerful electrical force bursts, which she called her "stinger blasts", "stingers", or"wasp's stings." Originally, she required special wrist devices to produce these but again, Pym particle absorption allowed her to create the ability unaided.
The Wasp's genetic modifications also granted her the ability to sprout small prehensile antennae from her temples which allowed her to telepathically communicate with and control insects. However, this was an ability she rarely used.
Black Panther 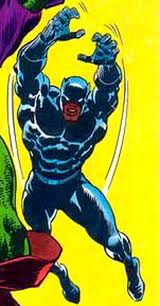 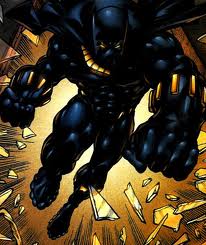 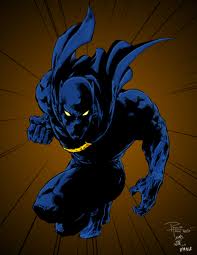 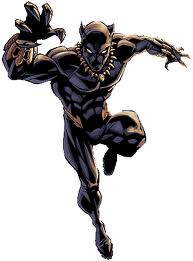 Although Black Panther is not one of the original founding members he is one of the earlier Avengers.﻿
Powers and abilities
The title "Black Panther" is a rank of office, chieftain of the Wakandan Panther Clan. As chieftain, the Panther is entitled to eat a special heart-shaped herb which, in addition to his mystical connection with the Wakandan Panther god, grants him superhumanly acute senses and increases his strength, speed, stamina, and agility to the peak of human development. He has since lost this connection and forged a new one with another unknown Panther deity, granting him augmented physical attributes as well as a resistance to magic. His senses are so powerful that he can pick up a prey's scent and memorize tens of thousands of individual ones.

As king of Wakanda, the Panther has access to a vast collection of magical artifacts, advanced Wakandan technological and military hardware, as well as the support of his nation's wide array of scientists, warriors, and mystics. The Wakandan military has been described as one of the most powerful on Earth. His attire is the sacred vibranium costume of the Wakandan Panther Cult.

He is a skilled hunter, tracker, strategist, politician, inventor, and scientist—he has a Ph.D. degree in physics from Oxford University. Considered one of the eight smartest people on the planet, he is a genius in physics and advanced technology, and is a brilliant inventor.

T'Challa is a rigorously trained gymnast and acrobat, showing mastery in various African martial arts as well as contemporary ones and fighting styles that belong to no known disciplines.

In Volume 3, writer Christopher Priest expanded the Panther's day-to-day arsenal to include equipment such as an "energy dagger", a vibranium-weave suit, and a portable supercomputer, the "Kimoyo card." In Volume 4, writer Reginald Hudlin introduced such specialized equipment as "thrice-blessed armor" and "light armor" for specific tasks, and for a short while outfitted him with the Ebony Blade of the Black Knight.
Vision 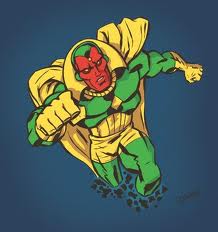 Vision is also one of the earlier members of The Avengers. If he was in the Hank Pym, Wasp, and the villain Ultron would have to be in the movie.
Powers and abilities
The Vision is described as being "...every inch a human being—except that all of his bodily organs are constructed of synthetic materials." The Solar Jewel on the Vision's forehead absorbs ambient solar energy to provide the needed power for him to function, and he is also capable of discharging this energy as optic beams; with this, he can fire beams of infrared and microwave radiation. In extreme cases he can discharge this same power through the Solar Jewel itself which amplifies its destructive effects considerably, albeit at the cost of losing most of his resources. The Vision also possesses the ability to manipulate his density, which at its lowest allows flight and a ghostly, phasing intangibility, and at its heaviest provides superhuman strength, immovability, and a diamond-hard near invulnerability. The Vision is capable of reaching a density ten times greater than that of depleted uranium. On one occasion, the Vision uses this extreme durability to render unconscious the villain Count Nefaria. The Vision often uses his ability to alter his density against foes, by phasing an intangible hand through them and then partially re-materializing it—a process he describes as "physical disruption." This effect typically causes great pain and results in incapacitation, as is the case when used against the Earth-712 version of the hero Hyperion. Being an artificial life-form/android of sorts, the Vision possesses multiple superhuman senses—as well as superhuman stamina, reflexes, speed, agility, and strength (even without being at high density). The Vision was trained in unarmed combat by Captain America, and is an expert in the combat use of his superhuman powers. The Vision is an expert on his own construction and repair, and is a highly skilled tactician and strategist. The Vision controls his density by interfacing with an unknown dimension to/from which he can shunt or accrue mass, thus becoming either intangible or extraordinarily massive. The Vision also possesses superhuman analytical capabilities, and has the ability to process information and make calculations with superhuman speed and accuracy.
The Vision of the Young Avengers is able to use Iron Lad's neuro-kinetic armor to recreate the former Vision's abilities, including strength; density manipulation, and flight. The solar cell on the Vision's forehead can also emit a beam of infrared and microwave radiation. The Vision is also capable of energy and holographic manipulation, shapeshifting, and time travel. 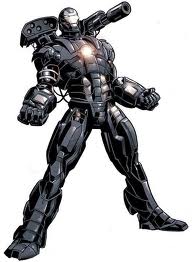 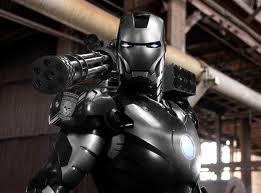 War Machine was not an Avenger until later on in the comic but since he was in the Iron Man 2 movie there is a good chance that will be in one at some point. He might even make a cameo in the up coming Avengers movie.
I will not post his powers and ablilities since it might spoil the Iron Man 2 movie but they very similar to Iron Man's.
Don't forget to check back tomorrow for Part 10 of The Avenger Guide.

Posted by James the Reviewer at 7:51 AM