We watched Unknown the other day on Blu-Ray.

The Bad: The plot is not the most original,

Plot: Dr. Martin Harris (Liam Neeson) and his wife Liz (January Jones) arrive in Berlin for a biotechnology summit. Upon arriving at their hotel, Hotel Adlon, Martin realizes his briefcase was left at the airport. He takes a taxicab driven by Gina (Diane Kruger), but on the way to the airport, the cab crashes off a bridge into the river. Martin is knocked unconscious upon impact, but Gina saves him from drowning before fleeing from the scene to avoid the police, since she is an illegal immigrant from Bosnia. On Thanksgiving day, he gains consciousness at the hospital after being in a coma for four days.
Martin returns to his hotel, only to discover another man (Aidan Quinn) with his wife, who tells hotel security she does not know him. He attempts to contact his old colleague Prof. Rodney Cole (Frank Langella), who is unavailable due to Thanksgiving in the United States. Martin then heads to the office of Prof. Bressler, whom he is scheduled to meet that day. However, he sees the impostor, "Martin B", already in a meeting with Bressler. As Martin attempts to prove his identity, Martin B shows him his ID and family photo – both of which have Martin's name, only with his face replaced by that of the impostor. Disillusioned by the identity crisis, Martin falls unconscious and finds himself back at the hospital. An assassin sent to target him kills Nurse Gretchen Herfort, but Martin escapes.  (This plot summery was copyed from Wikipedia). Watch the movie to watch happens next.


Plot: 7.8/10- The plot is interesting with shocking plot twist but is a kind of a rip off of The Bourne Identity movies.


Action: 6.7/10- Action is not the focus of Unknown but there is some good hand-to-hand action scene and a cool car chase.

Acting: 7.3/10- Liam Neeson's performance was awesome as always and the rest of the cast was also good.


Soundtrack: 6.1/10- The soundtrack worked for the movie but it wasn't great.


Overall: 7.4/10- Overall Unknown has a good balance of action and mystery which makes for a good movie.


Closing comments: You may have heard the story before if you have seen The Bounre Identity but it is still worth checking out. 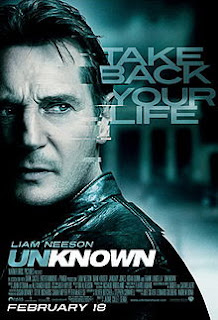 Posted by James the Reviewer at 7:07 AM