Since the beginning of October, I (Hamlette) have been hosting a read-along of Hamlet on my book blog, The Edge of the Precipice. We've finally finished it up, and to celebrate, I'm holding a giveaway of several Hamlet-related items, including two movie versions AND a brand-new copy of Patrick Doyle's soundtrack for Kenneth Branagh's 1996 film version. You are hereby invited to enter that giveaway here, on my blog. 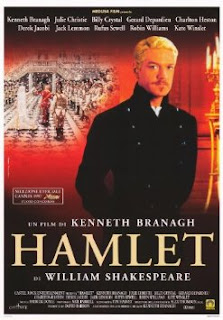 Now, for the music!

The first track on the CD is "In Pace," which is Latin for "in peace."  It's sung by the great tenor Placido Domingo.  I love how it begins softly and intimately, like a prayer asking for peace, and then swells gradually to a bold statement that someone has found the peace they sought, even if it's only peace with themselves and not with the world.

"Oh Heavy Deed" is a much darker track, full of discontent and malice.  It makes me think of someone pacing back and forth, plotting something.  Or maybe a predator stalking its prey.  You get a pretty clear idea just form the music that something very bad is happening.

"Good Night, Sweet Prince" is soft and sad, but not despairing.  It begins with that same theme from "In Pace," but without the vocals.  It feels calmer, thoughtful, almost dreamlike.  Events have reached their inevitable conclusion by this point in the story, and now the remaining characters need to process all that has occurred.  Then the music swells briefly, like it's crying out for our attention before it subsides into a more accepting attitude.  Doyle is a master of lush orchestral scores, and this definitely showcases his expertise. 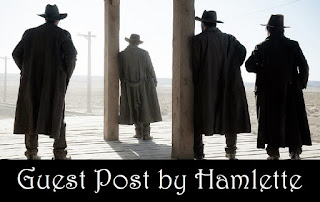