The fifth and final part of my Summer Anime Overview is here where I discuss of the year's best series including: Sword Art Online II, Tokyo ESP, Tokyo Ghoul, and Zankyou no Terror.

Sword Art Online (SAO) is a series that received a lot of hate, and while the first season certainly had its flaws, it was better than a lot of other shounen series out there. SAO2 continues the story of the main characters with a new video game, Gun Gale Online, an online shooter, which adds some cool sci-fi elements to the previously fantasy inspired SAO. As with the first season, A-1 Pictures' animation is undeniably stunning, and episode three actually gives one of the new characters a surprisingly dark and tragic backstory. The most recent episodes has added some intriguing and darker character drama, which works well, and of course, the action is a ton of fun in the series. And yes, Kirito is essentially using a Lightsaber; the sound effects are virtually the same! While the pacing seems to be a tad off, if you liked SAO season one, definitely watch season two; if not, avoid it entirely.

As you might remember from my in-depth review of the first episode, Tokyo ESP was my pick for best anime of the summer, and after watching six episodes, Tokyo ESP has dropped from being the best of the year to being one of the better series. While the first episode was light on exposition, it served as an intriguing and action-packed introduction to the world of Espers by throwing the audience into the middle of the story. Some viewers did not seem to like this type of storytelling, which worked well in Ga-Rei Zero, but to me, it was an excellent setup for the world of Espers. As I predicted, episode two takes the audience back to the first chapter of the manga, which it adapted with surprising accuracy. Episode 2 featured a more comedic tone by showing the origin of the mysterious "White Girl," which plays out a lot like western superhero comics. The later episodes are a little hit and miss, but the tone is usually more comedic and fun, rather than dark and serious like the first episode. As a major fan of superhero comics, seeing a Japanese take on a strange event giving random people extraordinary powers, is a ton of fun to see, but it is not for everyone.
-8.2/10

The darkest and most gruesome series of the summer, Tokyo Ghoul showed some potential after three very strong episodes with solid character depth, world building, and even heart in episodes two and three. After the introduction of the series' antagonists, the quality of the series takes a bit of a downturn, but has righted itself in the recent episodes. While Tokyo Ghoul is certainly not for faint of heart, this supernatural thriller captured my attention by the third episode, and I plan to watch it until its conclusion. Also, Studio Pierrot's (Legend of Korra: Book 2)
animation is mostly very strong in all its gory glory.
-8.0/10

Plot Summary: "The suspense horror/dark fantasy story is set in Tokyo, which is haunted by mysterious "ghouls" who are devouring humans. People are gripped by the fear of these ghouls whose identities are masked in mystery. An ordinary college student named Kaneki encounters Rize, a girl who is an avid reader like him, at the café he frequents. Little does he realize that his fate will change overnight." 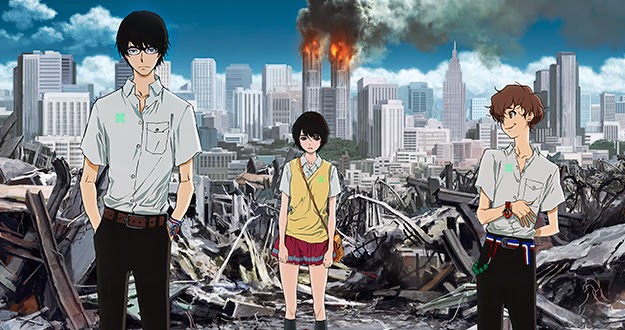 Zankyou no Terror, translated as Terror in Resonance, is one of the year's most anticipated series, and it does not disappoint. Zankyou no Terror is an original series by Shinichirō Watanabe, who is most known for series such as Cowboy Bebop and Samurai Champloo, and the score is composed by the legend herself, Yoko Kanno, so you know that there is a lot of talent behind the project. As for the quality, Zankyou no Terror's first episode is all around solid as it sets up the series' mature story of teenage terrorists. However, it is the following episodes that raise to another level entirely with challenging riddles and suspense that reminds me of Death Note with realistic bombs, instead of a notebook. Also, interestingly, these guys are not murdering people (at least not many) since their plans give people time to excavate before blowing stuff up, and their motivations are still mysterious, which is intriguing. MAPPA's animation is generally strong with a mostly realistic art style that is definitely indicative of Shinichirō Watanabe's signature style. If you watch one series this summer, Zankyou no Terror is the one it should be. Thus far, it is far ahead of the other series this summer with some of the most mature and intriguing storytelling I have seen in quite some time.
-9.4/10

Plot Summary: "On a summer day … A massive terrorist bombing suddenly struck Tokyo. The culprits behind the act that woke up this complacent nation from its slumber, were just two boys. Now, the culprits known as "Sphinx" begin a grandiose game that encompasses all of Japan."

Posted by James the Reviewer at 7:34 AM