Ahoy there me hearties! With tomorrow being International Talk like a Pirate Day, and to prepare for my Top 10 Fictional Pirates list, I am reviewing Space Pirate Captain Harlock. 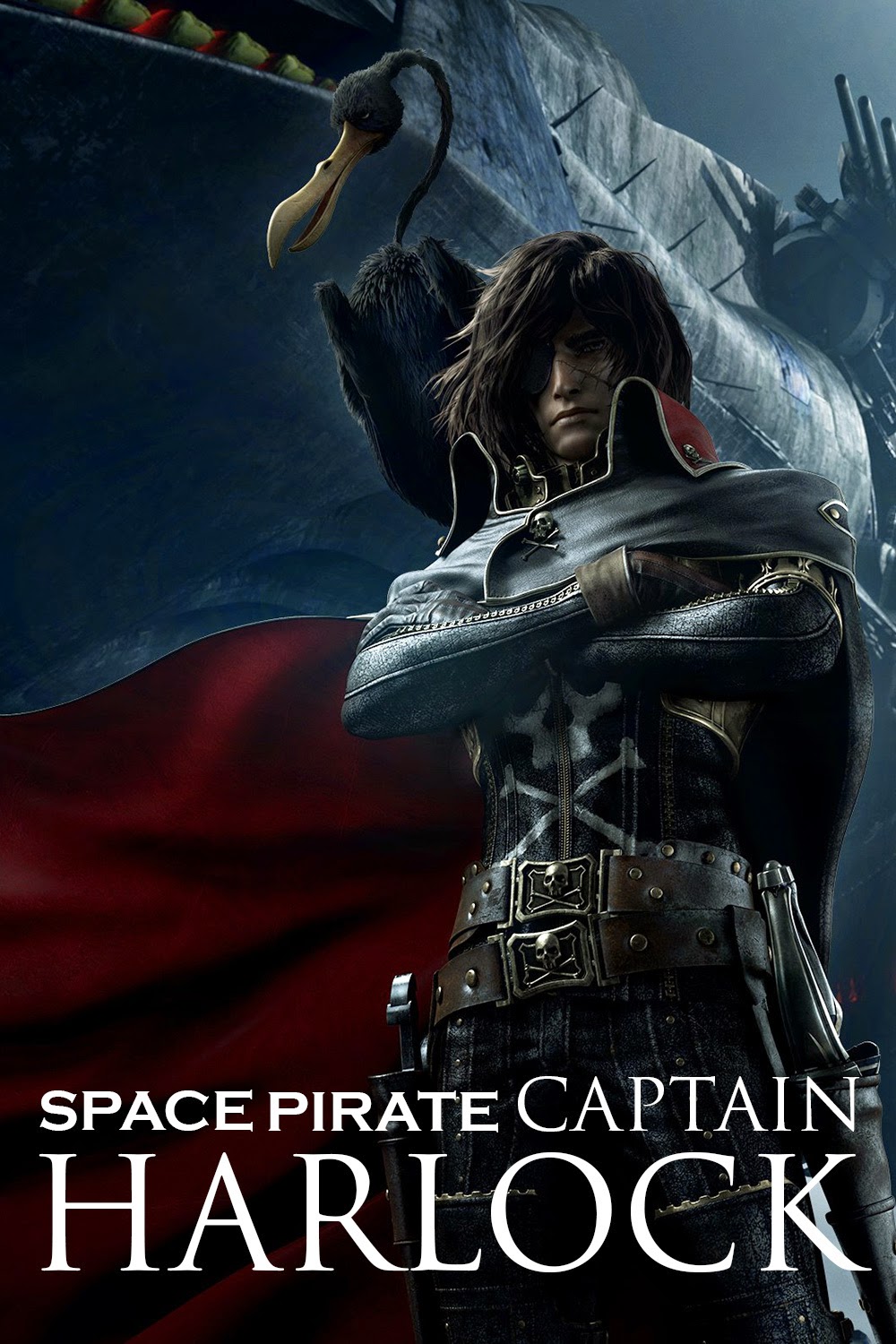 In the future, mankind discovered faster than light travel and began to colonize other planets. After not being able to find enough resources, the remnants of humanity traveled back to Earth and fought a war for control of the Earth. When the Gaia Sanction won the war, they created a dictatorial government. 100 years later, Captain Harlock, captain of the alien/human hybrid spacecraft, the Arcadia, is at large trying to set the 100 dimensional oscillators to execute his mysterious plan to end the rule of Gaia Sanction.
Space Pirate Captain Harlock is an intriguing experiment of sorts to make a big budget, 3D animated PG-13 action film. While others have been made in the past, not many have been this widely released and promoted overseas, even if the film only did mediocre at the box office. Interestingly, Space Pirate Captain Harlock, aka Harlock: Space Pirate, is licensed and dubbed by Netflix. So, if you have Netflix, it is easy to watch as of now. You can also find the English subtitled version of the film on various anime websites.

Plot: 6.4/10- Unfortunately, Harlock's plot is one of its weaker elements. On the positive, the world the film creates is intriguing and provides enough exposition so that the audience understands what is going on, despite lack of knowledge about the old TV series.

Many of the concepts, while somewhat familiar, are interesting and effectively portrayed. On the negative side, several plot points and the progression of the plot in general can be a little confusing and slightly nonsensical. Not everything makes sense in the end, and the sci-fi jargon is a little too far out there. It is certainly not a dumb movie, but it almost verges on being overly complicated.
Characterization: 7.1/10- While some of the character can be a bit on the heavy handed side, it ultimately works for the most part. Despite Captain Harlock being the titular character, he is not the main character. Yama (or Logan in English release) is the main character with much of the story taking place from his perspective. A lot of his backstory and how it relates to his brother, Isola (Ezra in the English release) is executed well enough to provide the characters understandable motivations. The crew of the Arcadia, like the main female protagonist, Kei, and the other members are fun and memorable, albeit not particularly developed. Captain Harlock reminds mysterious for the majority of the film, but his backstory is explained towards the end.

Action: 8.4/10- Harlock's action is one of the film's strongest aspects. With the somewhat realistic, almost video game like, computer graphics, the action scenes are exciting and fun. Unlike essentially every other 3D animated film, the action sequences are not held back by being a "kid's movie" with many of the action scenes taking advantage of the freedom that animation affords.

Acting: 7.7/10- Both the English and Japanese cast do a fine job, with the Japanese ultimately outshining the English one.

In most 2D animated English dubs, the English actors are usually able to match their lines to lip flap of the character. With the 3D animation however, the dubbing is more like a live-action dubbing with the mouths rarely going with the words due to the realistic mouth movements, which can be distracting for some viewers.

Art Style: 8.9/10- Toei Animation does a bang up job with the 3D animation. It interestingly adapts Leiji Matsumoto's 2D visual style, particularly the character designs, into semi-realistic 3D animation. Even though 2D animation is ultimately better, this use of 3D animation opens up some interesting possibilities. The attention to detail with the spaceships and the action scenes are particularly noteworthy.

Soundtrack: 8.0/10- While not the most original, the film's score is perfectly suited to the epic space opera setting with several notable tracks.

Humor: N/A- With the exception of a few remarks by the comedic relief character, there is not much humor to be had.

Non-Otaku Appeal: Except for the slightly abnormal character designs, there is not much reason for a typical sci-fi action fan to be dissuaded from watching the film. It is on Netflix, and while the movie is not the best example of Japanese filmmaking, if you enjoy sci-fi movies or video games like Mass Effect, Halo, and the like, you should give it a try.

Entertainment Value: 7.9/10- Even though the movie drags a tad in a few places, the action, characters, and setting entertained me for the majority of the film.

Overall: 7.3/10- Despite several narrative flaws, Space Pirate Captain Harlock is a sci-fi film with entertaining action, a unique setting, and solid character drama, and all of it is executed with impressive animation.

Closing comments: With the quality of the technology in use, the film could have been something truly special, but alas me hearties Space Pirate Captain Harlock is still an entertaining sci-fi romp about one of the coolest space pirates in fiction.

Thanks Hamlette for hosting her Piratical Blogathon, for the upcoming Talk like a Pirate Day. You can check out her blogs Hamlette's Soliloquy and The Edge of the Precipice in those links.

Be sure to check back tomorrow for more pirate swashbuckling with my Top 10 Fictional Pirates list.﻿

Posted by James the Reviewer at 7:19 AM