Plot: 9.7/10- Despite a few very minor plot holes and clichés, the film brilliantly showcases why a man with a gun is still needed in this age of technology. The dialogue is often clever and well written, with some perfectly placed references in many of the classic James Bond films. However, the opening and climax is where the film truly shines, with shocking plot twists and intense character moments. Bond is portrayed as being human and is given a real back-story, which had only been hinted at in previous films.

Action: 9.4/10- From the opening action set piece (more below) to the climatic finale, Skyfall's action was filmed brilliantly. One fight reminded me of the Odd Job fight from Connery's Goldfinger complete with a villainess pit of giant reptiles, yet it fit within the world and did not seem unrealistic (except for the obviously CGIed Komodo Dragon). The final battle was completely unique, there has never been anything like it in any Bond film and it had a lot of tension. Even though it was filmed at night, there was enough lighting to clearly see what was going on throughout the film. Fortunately was almost no use of the dreaded "shaky-cam", which permeates far too much of modern cinema today, every shot was framed with skill by the director. As stated previously even the silhouette fight was also filmed well. My only slight problem with the action is that there could have more because it was all done so well.

Acting: 9.8/10- Due to the sheer amount of fantastic performances, I parts about each major actor.

Daniel Craig gives a role defining performance as Bond, forever solidifying him as one of, if not the best James Bond. He gave great depth to the role, even improving upon his performance from Casino Royale.

Judi Dench as M gives the best performance she has ever had in the role. She was given a large role in the film and it certainly worked out perfectly. In a way, Dench is the "Bond Girl" of the film but more in a motherly sense.

Javier Bardem as Raoul Silva was great in the role, but as I stated above, was not quite as good as I expected.

Ben Whishaw as Q was great in the role, even if he did look a little ridiculous in his funny hipster outfit. Nonetheless, Q is back in the Bond franchise and I am happy about it.

Naomie Harris as Eve, an MI6 field agent who assists Bond on several occasions and she was good in the role.

Ralph Fiennes as Gareth Mallory gave a top notch performance in his role and was given more development than I expected.

Bérénice Marlohe as Sévérine is basically the "Bond Girl" of the movie, and given a surprising amount of depth in her very minuscule role. Despite this, she is attractive and memorable in her role.

The other actors were all great in their roles, including a character who I will not name as to not give away possible spoilers.

Special effects: 8.6/10- While I want to give the effects a higher score for some incredible practical effects shots, there was a CGI animal that looked ridiculously fake for a moment. It was not too distracting but worth mentioning, considering the budget of the film.

Soundtrack: 9.9/10- One of the best James Bond soundtracks to date. Seamlessly blending the iconic Bond theme with Thomas Newman's dynamic score. However, there were a few too many hard percussion similar to some Hans Zimmer scores like The Dark Knight.

Comedy: 8.2/10- Definitely the most humorous of Daniel Craig's Bond films, particularly the clever references to the classic Bond films, those were often hilarious.

Opening Scene: 10/10- Possibly the best James Bond opening yet with a nearly 15 minute long chase scene that seamlessly ended into Adele's "Skyfall" song. Opposed to Quantum of Solace "shaky-cam" fest, Skyfall's opening was done great style and finesse, yet retained a perfect mix of brutally and fun. It is on par with "The Spy Who Loved Me" Union Jack ski jump parachute. Some may argue that the film opens too big, but I see it as a way to get the action out front, thus making the next 30 minutes of character development not to feel boring or out of place.

Gadgets: 8.1- Finally, Craig's Bond gets to use some gadgets! Albeit still within the realm of  reasonability and something similar to what was used in "License to Kill". There were a few other gadgets used but that would require going into spoiler territory.

Title Sequence: 10/10- Visually Skyfall's Title Sequence might just be the best one yet. Everything about it was visually stunning and reflecting upon the film's opening sequence and what is to come. Adele's Oscar Winning song was fantastic and actually has much to do with the actual film. One of the Bond opening songs with the likes of "Goldfinger" and "Live and Let Die", truly beautiful work by Adele.


Would I Watch This Again: I want to watch it again right now, and have already seen it twice in one week.

Overall: 9.6/10- Now, the big question: is Skyfall the best James Bond film yet? And I can confidently say that Skyfall is not just the best Bond film, it so much more than a Bond film, it is one of the best films I have ever seen.


Closing comments: Not only is Skyfall the best Bond film to date (in my opinion), it is a celebration of what makes Bond a timeless classic that will endure throughout the ages.

If you are unfamiliar with the extra categories that I use when reviewing James Bond films,

for more information on James Bond and why I like the franchise click here to my James Bond Movie Guide.

Note: Skyfall is very accessible for newcomers to the Bond franchise. To have the best experience without watching every film, watch Casino Royale, Goldfinger and maybe Dr. No., fortunately, it is not necessary to watch the dull and derivative Quantum of Solace but definitely watch Casino Royale. However, long time fans like myself will find the most enjoyment out of Skyfall.

Plot Summary: The following plot summary is copied from Wikipedia.com.
In Istanbul, MI6 agents James Bond and Eve chase a mercenary, Patrice, who has stolen a computer hard drive containing details of undercover agents placed in terrorist organizations by NATO states. Patrice wounds Bond in the shoulder and, as the two men fight atop a train, Eve inadvertently shoots Bond, allowing Patrice to escape. Bond falls into a river and goes missing, and is presumed to be dead.
In the aftermath of the operation, M, the head of MI6, comes under political pressure to retire from Gareth Mallory, the Intelligence and Security Committee Chairman. On her return from the meeting, MI6's servers are breached and M receives a taunting message via computer moments before the offices explode, killing a number of employees. MI6 relocates to its emergency offices underground. Bond, having used his supposed death to retire, learns of the attack and returns to London. Although he fails a series of physical and psychological examinations, M approves his return to the field. Shrapnel taken from Bond's shoulder wound helps identify Patrice, and intelligence places him in Shanghai, where he is planning an assassination. Bond is ordered to identify Patrice's employer, recover the stolen hard drive and kill Patrice.
Watch the movie to see what happens next.

Click on the links below for more Skyfall Reviews by my favorite Film Critics.
Skyfall by Jordan at Rath's Reviews
Film Review: 007 ~ Skyfall Alexandra Lanc at Words of the Worlds
Movie Review: Skyfall (2012) by Buddy2Blogger at Buddy2Blogger
Skyfall by Ian Drury at Banon's Roar!
Skyfall Review by Daniel at Random Mexican's Movie Review Extravaganza
If you have reviewed the film and would like a link to your link review to be displayed on tomorrow's post, please comment. 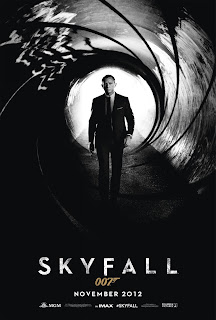