After hearing for over a year about how Attack on Titan is one of the best series of all-time, and the best of last year, the first episode of Attack on Titan officially aired in American. Does it live up to the Titan sized? Oh yeah! Even if you have absolutely no interest in anime, you own it to yourself to at least watch the first episode of Attack on Titan; it is that awesome. If you have a television provider, like Charter or DirecTV, you can watch the series here; if you live in another country or do not have a TV provider, you can watch the episode here in English dub (go at your own risk). If you want to watch the episode (and the entire series) in sub, you do so here from the official Crunchyroll website. 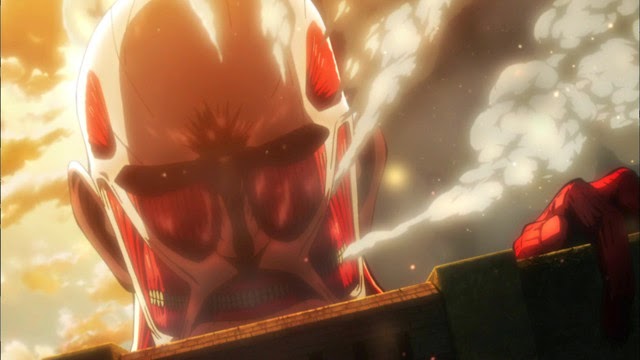 Despite hyping up the series for the nearly a year with many of my online friends, and the internet in general, telling me that I have to watch Attack on Titan, it actually delivered with possibly the best opening episode of a series that I have ever seen. The episode introduced the audience to the characters and the used effective world building techniques to set up for what is to come. Also, the series does an incredible job at making the Titans terrifying creatures. You can feel the fear of the characters, and *Spoilers* when Eren's mother was eaten by the Titan, the animation and the music effectively made the scene surprisingly impactful considering that we have just meet these characters. *End Spoilers*

My only minor complaint actually has nothing to do with the series itself. Having watched exclusively subbed series for the past two months, watching a dub was slightly odd at first. Fortunately, thanks to the excellent performances, it felt normal after a few minutes

Acting: 9.3/10- Being that this is the premiere of the English dub that everyone has been waiting for, it does not disappoint for the most part. While I believe Bryce Papenbrook will sound better later in the series when Eren, as a character, grows into a young adult, which I believe will happen in the next episode. Papenbrook effectively sounded like a wimp, and I believe he will do an excellent job as the series progresses. Trina Nishimura (Steins;Gate and FMA: Brotherhood) as Mikasa Ackerman gave a standout strong performance in her brief role. Most of the other English actors were very good in their roles, although we will have to wait until later to determine how well each actors does in their role.

Art Style: 9.7/10- Attack on Titan's animation is rather stunning. The detail work in the background and the general environment is nearly movie quality. Everything is fluid and crisp, and the animation style is appealing to look at. In terms of character designs, most of the character look very well done. However, a few of the character models looked a little unrealistic compared to the other characters, but they were mostly background characters. Also, using fast moving lines to produce a sense of speed is a little odd looking compared to the rest of the animation, but it still works for the most part. There is a little CGI that is used, which, while unnecessary, does not clash as much as it does with other series.

Soundtrack: 9.5/10- While we have yet to hear the best of Hiroyuki Sawano's score, what was used effectively added emotional weight to certain scenes.

Opening and Ending: 10/10- Well before watching Attack on Titan, the opening song, "Guren No Yumiyah," has been one of my favorites. I have already listened to it over 300 times, and its sheer epicness and intensity really gets you excited for what is coming next. Unfortunately, in the TV cut of the episode, part of the opening had to be cut so that it would fit into the timeslot. The ending song is also very good being slower and fitting for the series' darker themes.

Non-Otaku Appeal: Providing you do not mind violence, everyone should at least give the first episode a watch (link at the beginning and end of the review).

Overall: 9.9/10- For a pilot episode, Attack on Titan effectively invested me in the characters and set up the world that the characters inhabit. Compared to other first episodes, there are few, if any, that match it in terms of how effectively it grabbed my attention and interest. Thankfully, the Titan-sized hype was certainly warranted, because the first episode did not disappoint.

I will continue to review Attack on Titan episodes as they air on Toonami because it supports the anime scene in America, so be sure to check back next week for more. 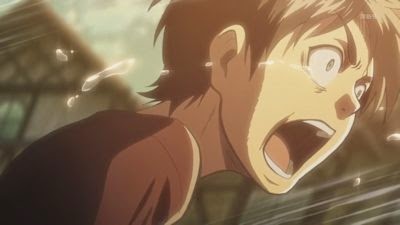 Posted by James the Reviewer at 6:17 AM