Doctor Who is Now Cool.

Doctor Who is my favorite TV series and when I first started my blog nearly two years ago, not many other Bloggers watched Doctor Who, so I never posted about it. However, it has recently become extremely popular, even being voted "Fan Favorite Show" for TV Guide and being featured on the cover. As the 11th Doctor would say "I'm the Doctor. Doctor Who is now cool." Since Doctor Who is premiering this Saturday, here are some thoughts about the different Doctors. Because many viewers have just started watching the series, this post will be spoiler free.
Note: I have been watching the series since the reboot of the series aired in American. 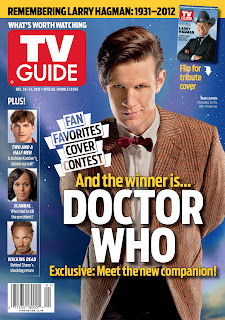 Christopher Eccleston, is the first actor to play the Doctor in the 2005 reboot of the series and is all too often forgotten. Although the first season could be considered cheesy and weird by today's standard, it was mostly due to the low-budget but the season (or series if your British) offered some original concepts and unique sci-fi story telling. Eccleston was one of the more serious Doctors, yet had a great sense of humor. He is not my favorite Doctor, but started the series off with an excellent interpretation of the Doctor.

David Tennant might be the most popular actor to play the Doctor and definitely had some of the best episodes of the series. He gave the perfect mix of humor and darkness to the character and had some of the best writing in the series. Tennant also had the best villains, including the Master, Cybermen, and of course the Delek (which the 9th Doctor also fought).

Now, on to my favorite Doctor, Matt Smith! When I saw Matt Smith after the Regeneration my first thought was "I don't think I'm going to like this guy." but wow I was wrong! Easily the funniest Doctor and an extremely likable performance as the Doctor. His last few seasons have taken some of the biggest risks of the series and offered some incredible story-lines.

Who is your favorite Doctor (was not even intended to be a pun)? And if you have not seen the series you should

And find a way to watch the series, because it is fantastic.

Posted by James the Reviewer at 7:56 AM

Email ThisBlogThis!Share to TwitterShare to FacebookShare to Pinterest
Labels: Doctor Who