Wow, just wow. I was left nearly speechless after the ending to "The Wrong Jedi". *Full Spoiler Warning but if you are a Star Wars fan and haven't seen these last few episode, you have really been missing out on great some fantastic Star Wars story*
I give major props to the Clone Wars for actually making Ahsoka leave the Jedi Order. The entire last scene left me expecting Ahsoka to change her mind and rejoin Anakin and the Order but no, she is gone and there is nothing that is going to change that. While ending moments of the episode were the most memorable, the other aspects did not disappoint either. The revival of Barriss Offee to be the one that set-up Ahsoka was not surprising, it was not played for a shock, but more as an obvious resolution. Earlier in the episode, we saw more of Anakin's Dark Side when he brutally interrogated Ventress by grabbing her by the neck. During Anakin's battle with Barriss he express even more of his power when he basically did a "screw this" Force blast to subdue Offee.
The only slight problem I have with the episode was Barriss' change of character (which is said to be vastly different in the EU) and how did Barriss defeat Ahsoka so easily? Since we, the audience, have not seen Offee since the "Brain Invaders" arc, she could have easily had a change of character over the year or so that she has not been in the series, which seems like an easy answer. While Offee is a powerful Padawan, she is just that, a Padawan, however, Anakin was not trying to kill Barriss, thus the probable answer to the question. Despite this, that battle through the Jedi Temple has awesome. We even saw the annoying Jedi Younglings from previous episodes in the series.
On a side note, Tim Curry as the new voice of Palpatine was decent. While I did not even notice it upon my first viewing, after listening to it again, there is a noticeable difference between Ian Abercrombie (RIP) and Curry, but he should do fine later in the series.
Now back the episode's final moments. While I said the end of "The Jedi Who Knew Too Much" had the best and most emotional moment of any animated work, the ending of "The Wrong Jedi" even managed to top that with Ahsoka's decision to leave the Jedi Order. Some fans might be wondering why she did not return to the Order, but I completely understand her reasons because what Offee said at the trial was mostly true, the Jedi were the cause of the war and when a fictional series seems so real, in its story and make you question what you previously believed, you know it is something special. Recently and in previous standout story arcs, The Clone Wars has become better than the Prequels in many respects, particularly the politics and political intrigue where the Prequels (Ep. III is still great) failed so greatly. The emotion in the character's eyes was incredible, they almost looked real! And the cinematography was fantastic, the most realistic background yet for the series.
Unlike many other Clone Wars episodes on Cartoon Network, it did not cut away from the credits and left the audience (myself included) enough time to reflect on what just happened as the sad music play, which created an amazingly powerful effect. During the final scene the music was perfect, featuring a mix of "The Force Theme" from the original Star Wars soundtrack and something entirely new. One of the best tracks from The Clone Wars. For Ahsoka's fate, I am sure that we have not seen the last of her on the series. It is apparent that she will not be killed before or during the events of Order 66. Although I was looking forward to her enviable death, this was actually a better, more fitting way to exclude her from Revenge of the Sith's story line. Maybe she will be introduced in the new trilogy as a cameo helping Luke rebuild the Jedi Order or she may even get her know standalone film. It is uncertain whether the character could be pulled off in live-action, it could be cool to see her. If there is a standalone film, Ashley Eckstein could even play the character as a much older Jedi after Order 66, but further speculation should be saved for later posts.
Overall: 10/10- "The Wrong Jedi" was both crushing and satisfying at the time, the series has never had a better season finale and it may even be the best episode of the season 6, if not the best of the series period.
Also season 6 has been confirmed but it has yet to confirm which channel it will be airing.
What are your thoughts on the episode? Please comment below.
Here are my reviews for the other episodes in this story arc.
Clone Wars: To Catch a Jedi Review.
Clone Wars: The Jedi Who Knew Too Much Review.
Clone Wars: Sabotage Review. 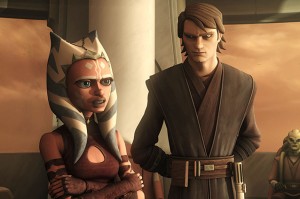 Posted by James the Reviewer at 6:12 AM