Here are today's trivia questions and last week's answers.
What on Doctor Who's TARDIS broke making it always look like a blue police box?
Which color pill Neo take in The Matrix?

In The Lord of the Rings, which of the four hobbit actors (not characters) are the oldest? And can you put them in the correct order by age, starting with the oldest?

Name the movie and characters that these quotes are from:

Character 1: “How’d you do that?”
Character 2: “Work out, plenty of rest. You know. Eat your green vegetables “
Character 1: “That’s what my mom’s always saying but I never actually believed her.”

Name the movie and characters that these quotes are from:
Character 1: “How does it look?”
Character 2: “Like Christmas but with more me.”
Answer: The Avengers: Pepper Potts, and Tony Stark

Where did Agent Phil Coulson say his girlfriend lives in The Avengers? And what was her occupation?
Answer: Portland, Oregon and she was a chelloist.
Jamie answered the questions correctly. 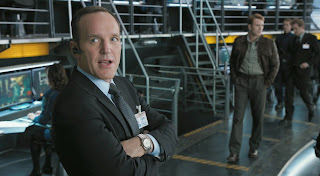 Posted by James the Reviewer at 7:36 AM

Email ThisBlogThis!Share to TwitterShare to FacebookShare to Pinterest
Labels: Trivia