Here is my full Iron Man 3 review. Originally it was posted in two parts, but here is the full review for new readers or those who have not read my review yet. This review is part of Hayden's hero week on her blog Story Girl. Also please check out my other post today, Man of Steel Sequel Villains: Part 1.
Thoughts: Iron Man 3, the long awaited follow-up to The Avengers, does it live up to the hype? Iron Man 3 has caused a divided on the opinion of the film: Half completely love it, and the other half just like it. This review is free of any spoilers. Unlike the previous Iron Man films, Shane Black has taken the helm as director of the film opposed to Jon Favreau and Shane Black does an excellent job with the film. He is credited for writing Lethal Weapon, which is one of my favorite action films, and his great sense of humor and witty dialogue is clearly present, except even better. Iron Man 3 throws Tony back in the metaphorical "cave" and he has to use his intelligence to get out of a jam. Iron Man 3 is completely unique compared to previous comic book films, it takes the genre is a new exciting direction, which works very well. What surprised me is how much of a detective/spy movie it turned out to be in a few parts. The action is a blend of Iron Man suit battles and classic action movie type action scenes, all of which was directed well (more on the action later in the review). As with most Marvel films, the true core are the heroes and how human and real the characters are portrayed, and Iron Man 3 is no exception. Robert Downey Jr. is better than ever as the always likeable Tony Stark. Sure, he may be a narcissistic jerk, but that is why he is such a deep and entertaining character. He laughs in the face of danger, Tony Stark is the opposite of every other comic book hero and that is what makes him and his films so unique. However what happened in The Avengers is catching up with him and he has to deal with it.
There is one kid in the movie named Harley and just about every time there is a kid in a film, said kid often times ruins the film or at least detracts from it, however that is not the case in Iron Man 3. Harley was great and his dialogue with Tony is hilarious. Tony talks all kinds of crap to the kid; he says things that you would never expect someone to say to a kid because Tony really does not care.
Now the part that will have audience members divided: the twist. While I will not spoil it, I actually liked the twist; it was clever and really smart when you think about it. Never before has something like it has been done with this type of film. I applaud Shane Black and company for taking such a gutsy move. Also there was only one minor scene that disappointed me in the slightest, although it was not a big problem by any means.
What surprised me the most about some critics’ reaction was that some thought it was a tad slow. To me at least, it was never slow or boring. When there was not action, there were either important plot progressions, or witty humor, not even for a second was I bored. Every scene felt necessary and had a purpose. Also the film did a good job of adaption various comic book stories, particularly Extremis, even with the liberties taken with the story.
Iron Man 3 is loaded with famous aspects of various comic book stories, most of which I am very familiar with and they were handled very well.
It is no secret that The Avengers and other films leading up to it are some of my favorite movies ever made, but how does Iron Man 3 stack up against them? Obviously, The Avengers is the best, it had everything action, drama, heart, and loveable characters, after that, my favorite is basically a tie between Iron Man, Captain America and Thor, with the first Iron Man being maybe being slightly ahead of the other two. Although it is early to say for Iron Man 3 and it will require multiple viewings, it is at least on par with the others films, if not better.
Disney is clearly not trying to screw with Marvel's films whatsoever in terms of content of the films. While there was nothing overtly inappropriate about the film, which is good, it definitely was not trying to be "kid friendly" and kept in line with the first two Iron Man movies; it barely even resembled a Disney movie, which was great.

The Bad:
Plot: 9.9/10- Iron Man 3 did just about everything right. The dialogue was better than ever, which is a tough feat, considering how great the dialogue was in the previous Iron Man films. The supporting characters were given a better role, particularly Don Cheadle as "Rhodey". Similar to Lethal Weapon, Tony and Rhodey had a great buddy-cop vibe together in the film and their dialogue was excellent. At the plot twist my mouth was literally hanging open in amazement! Shane Black had some serious guts to do it and I respect him for that. Never have I been that shocked during a film ever maybe, which is something that rarely happens today. Being knowledgeable of the comics, a few of the minor twists were expected but like any great book adaption, I loved it all the same. Another thing that makes Iron Man 3 great is that he is suit working out some kinks with the new suit just like the first Iron Man film, which is one of the many reasons it was so great. The film had the perfect balance of epic finality and personal struggle. Also Iron Man 3 had a much more comic book feel, which makes sense considering what happened in The Avengers. There are references that are not in-your-face but more subtle, which worked well in the context of the film. My only slight disappoint in the plot was how the ending wrapped things up a little too quickly, other than that, everything was fantastic.

Some may try to compare it to The Dark Knight Rises because it is the third chapter of an epic comic book hero trilogy, but there are not that many similarities, except for a slightly darker tone. There is another comparison to a film that I will talk more about in the spoilers post.

Action: 9.9/10- Although there was not a lot of action in the beginning, Iron Man 3 has some of the best action scenes since The Avengers! Surprising there were not as many pure Iron Man in the suit type battles, it was more gunfights or a combination of both. There was one scene in particular that reminded me of an espionage film more than anything and I loved it! It was so cool and fun to watch. The final battle was pure awesomeness! It everything that I wanted the final fight to be, couldn't have been better. Black's fight choreography and camera work was spot on; there was never a scene that was too dark or any use of shaky-cam.

Acting: 10/10- I know will never happen for this role, but Robert Downey Jr. should a freaking Oscar! He was beyond fantastic as Tony Stark. Downey mixes the witty/sarcastic humor with deeper character problems perfectly. His PTSD is clearly validated from his experiences in The Avengers. Gwyneth Paltrow as Pepper Potts was perfect as always and her banter with Downey was often humorous and had a sense of realism. She could have been in the film a little more, however absent was given due reason. Don Cheadle as Rhodey/War Machine was the surprise of the film to me. His role was expanded and there was a buddy cop type relationship between him and Tony, similar to Lethal Weapon.

Ben Kingsley killed it as the dastardly Mandarin, proving yet again why he is one of the best actors in the business. Guy Pearce was great overall, there was one scene where may have been a little over-the-top, however his character was given enough depth. Rebecca Hall’s role was very minor and was not intended to be more than a plot device, yet she was still solid in her role. Former director Jon Favreau was given more character depth and more to do than just be a stupid comic relief, although he was often hilarious. The villain’s henchmen played by James Badge Dale and Stephanie Szostak played their role well considering their minor part in the film. Ty Simpkins as Harley was surprising great for a child actor. He was never annoying in the slightest and only added to the film.

Special effects: 9.9/10- How does Marvel do it? The Avengers’ special effects looked so ridiculously realistic that you almost forgot that there were any effects used and Iron Man 3 does the same. Many of the effects were probably practical effects and some of the others had to have been digital, all of which looked amazing. Since the first Iron Man, everything has been so convincing in his movies it is difficult to tell when CGI is actually used anymore, it is that good.

Soundtrack: 9.9/10- Brian Tyler’s score is incredible! The soundtrack perfectly fits the tone of the film, particularly the main theme, which is used throughout the film in multiple variations. Also the track played during the credits is one of my favorite film tracks since The Avengers.

Comedy: 9.7/10- While definitely not a comedy, Shane Black’s witty script and cast’s adlib dialogue is often hilarious. Robert Downey Jr. is funnier than ever, and his banter with Cheadle created some great humor. I only wish Tony and Pepper could have had more humorous dialogue together like the first Iron Man film.

Would I Watch This Again: When will the Blu-Ray be available to pre-order? I am buying as soon as it is released or when an Iron Man trilogy box set is released, because I cannot wait to see it again!

Overall: 9.9/10- Iron Man 3 takes big risks that you will either love or hate, but to me Iron Man 3 is everything I wanted and then some. Basically, do yourself a favor and watch Iron Man 3, even if you do not love it; it is a blast to watch.
Closing comments: Obvious Iron Man 3 is no Avengers; however it is the perfect conclusion to one of the best film trilogies ever made.
Recommended for: Everyone, Comic Book fans, Action fans, Robert Downey Jr. fans, Action Adventure fans, Sci-Fi fans, Anyone how watched The Avengers,

I encourage spoilers in the comments, so beware if you have not seen the film.
Note: For this review I have elected to remove my usual plot summery as to not spoil the plot and because the trailer gives away enough already.

Please check back tomorrow for more on Agents of S.H.I.E.L.D., Friday for a Wreck-It Ralph review and maybe next week for a full Iron Man 3 spoiler discussion. 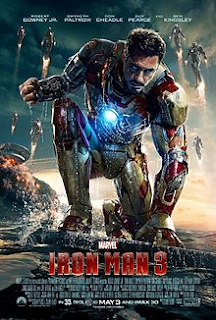 Posted by James the Reviewer at 7:19 AM