"Whatever you do, don't blink. Blink and you're dead. They are fast. Faster than you can believe. Don't turn your back. Don't look away. And don't blink. Good Luck." Blink, the classic Doctor Who episode introducing one of the Doctor's best villains, the Weeping Angels. Since there are many new Doctor Who fans reading this blog now, it seemed like a good time to review a classic Doctor Who episode after re-watching it. "Blink" is considered by many to be one of, if not, the best Doctor Who episode ever made, and while it is not my absolute favorite, because would be impossible, it is certainly one of the best. Those who dislike the more recent episodes of the series by Steven Moffat should not forget that he actually wrote "Blink".
For a Doctor Who episode, it probably has the least amount of the Doctor. "Blink" takes more of a horror approach in terms of story and tone. A Doctor Who episode can be just about anything, ranging from fun adventure to suspenseful horror, and "Blink" demonstrates how versatile and unique it can be. While it the episode is far from scary or terrifying, it is very suspenseful and leaves you on the edge-of-your-seat throughout. It is almost strange that the episode that lean towards horror like the "Empty Child" and "Silence in the Library" are the most memorable. Even six years later I can clearly remember everything that I did the night when the episode premiered and nearly everything about the episode, it was that memorable.
The Weeping Angles have to be one of the most unique and original monsters/villains ever created. Everything in the episode was explained enough to make sense, yet never felt exposition heavy. The two main characters of the episode, Sally and Larry, had good charisma and believability, which made it easier to like the characters. On side note: It would be great if Sally and Larry were to make another appearance in the series. Thanks to my cyber friend Shena Tokala for coming up with the idea.
Also the episode has one of my favorite Doctor Who quotes ever:

"People assume that time is a strict progression of cause to effect, but *actually* from a non-linear, non-subjective viewpoint - it's more like a big ball of wibbly wobbly... time-y wimey... stuff."

Overall: 10/10- "Blink" is a perfect episode of Doctor Who, introducing the Doctor's most unique enemy yet. Not only is it one of the Doctor Who episodes ever made, it is among the best television ever created, and remember, "Whatever you do, don't blink." 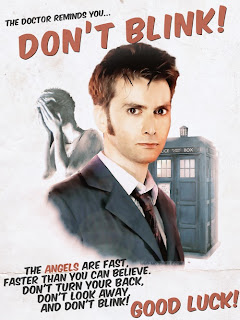 Posted by James the Reviewer at 6:47 AM