Thoughts: Wow, just wow, Aliens is one of the most pulse pounding, thrilling film I have ever seen! Few, if any, films have had me at the edge-of-my-seat and this among action as Aliens had. After a slow 40 minute buildup, the film became an intense thrill ride. Aliens, the sequel to Ridley Scott's Alien, except Aliens is directed by James Cameron. This movie has made me a fan of the Alien franchise, easily one of the best action films ever made. Compared to its contemporaries, only Indiana Jones and Star Wars have better action scenes and it would rank slightly below Cameron's Terminator 2. Some do not like Aliens because it "ruined the mystery of the first Alien film", to me however, this was the only logical step forward for the franchise. Rehashing the previous movie would have been pointless, Cameron turned a standalone film into an exciting franchise and made Ellen Ripley one of the best heroines in movie history. As a fan of the Halo video game franchise, I noticed many similarities to the games, particularly the technology and character Lieutenant William Gorman.

Warning: This film is rate "R" for language, violence and other mature content.


Plot: The following plot summary is copied from Wikipedia.com.
Ellen Ripley (Sigourney Weaver), the only survivor of the space freighter Nostromo, is rescued and revived after drifting for 57 years in stasis. At an interview before a panel of executives from her employer, the Weyland-Yutani Corporation, her testimony regarding the Alien is met with extreme skepticism as she has no physical evidence. Ripley loses her space-flight license as a result of her "questionable judgment" and learns that LV-426, the planet where her crew first encountered the Alien eggs, is now home to a terraforming colony.
Ripley is later visited by Weyland-Yutani representative Carter Burke (Paul Reiser) and Lieutenant Gorman (William Hope) of the Colonial Marines, who inform her that contact has been lost with the colony on LV-426. The company decides to dispatch Burke and a unit of space marines to investigate, and offers to restore Ripley's flight status and pick up her contract if she will accompany them as a consultant. Traumatized by her previous encounter with the Alien, Ripley initially refuses, but accepts after Burke promises that the team will destroy any Aliens found and not attempt to study them. Aboard the warship Sulaco she is introduced to the Colonial Marines, including Sergeant Apone (Al Matthews), Corporal Hicks (Michael Biehn), privates Vasquez (Jenette Goldstein) and Hudson (Bill Paxton), and the android Bishop (Lance Henriksen), toward whom Ripley is initially hostile due to her previous experience with the android Ash aboard the Nostromo.
Watch the movie to see what happens next.


Plot: 9.5/10- While not groundbreaking in terms of story telling, Aliens got it right where it mattered most, the characters. The plot served its purpose to deliver the thrills, however there were some good plot twists that kept things fresh and never predicable. A few of the Colonial Marines were thinly conceived and their dialogue was a little corn, which is the only noticeable, however their characters were not important to story and therefore not an issue. Somehow the film made a child, Newt, not completely annoying. Actually she made the movie better by adding depth to Ripley's character. The pacing was solid, the first 40 minutes or so, where kind of slow, but it was used as important buildup for the plot and action.


Action: 9.9/10- Aliens is one of the few films where some darkly lit and obscure camera angles actually help the action scenes, opposed to the usual shaky-cam mess of what people call an "action scene". The action had some of the most suspenseful action scenes I have seen in the film and many of the others scenes were just shot excellently. The final throw-down was epic and a perfect way to end the film.

Acting: 9.2/10- Sigourney Weaver as Ellen Ripley was nominated for an Oscar, which she was definitely deserving of. Unfortunately, the Academy overlooks modern action films even though all of the performances are Oscar worthy. Carrie Henn as Newt was excellent in her role. Michael Biehn played a similar role to Kyle Reese in Terminator, and he was good, even though not a main character. Bill Paxton as Private William Hudson gave an over-the-top performance and delivered some of the funniest lines of the film. A few of actors who played marines had some cheesy lines but nothing that detracted from the film.

Soundtrack: 7.9/10- James Horner's score adds tension and the military themes sound great. However, it is not one of his better soundtracks.


Comedy: 7.3/10- Bill Paxton delivered some hilarious lines but there was not much other humor in the film.

Would I Watch This Again: Most definitely, Aliens will be a film that I will watch many times in the future.

Overall: 9.6/10: Aliens is like a shot of adrenaline, pulse-pounding and exciting with a perfect mix of action and suspense, and it is one of my favorite movies ever made.

Closing comments: If you like science fiction and don't mind some blood and gore, watch the first Alien and then watch Aliens; it is awesome! 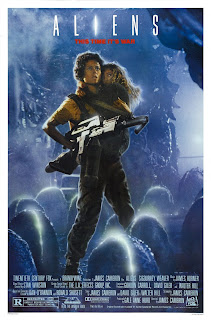 Posted by James the Reviewer at 7:29 AM