Thoughts: Death Note is a critically acclaimed psychological fantasy thriller anime. In general, Japanese anime is not my favorite. Other than the Iron Man anime I have yet to actually finish any anime series or film, until Death Note. Even though I did expect Death Note to be good, it took me by surprise because the series was amazing! One of the best televisions series I have ever seen.
The premise is that a brilliant high school senior Light Yagami finds a "Death Note" dropped by a Shinigami (basically a Japanese Grim Reaper). The Death Note has the power to kill anyone whose name is written in the note, however writer of the Death Note must know the person's real and face to actually kill someone. After Light discovers the power of the note he uses to "create his perfect world" by killing every criminal that is broadcast on TV and basically anyone who breaks the law. To catch "Kira," name given by the public to the mysterious killer of criminals, world's greatest detective "L" takes on the task of trying to catch Kira and then possibly the greatest battle of wits ensues. L vs. Light/Kira is one of the best rivals I have ever seen; it is the ultimate game of cat and mouse as each one tries to discover the others secrets. As to not spoil any plot points, which is imperative to enjoying the series, I will not say more about the storyline other than it is amazing and original. A big thanks goes to Stilwater at In the Shade of My Wide-Brimmed Hat for recommending Death Note in her Anime post. After starting the series last Sunday or Monday I watched it obsessively until Thursday when I finished the entire. The show had me hooked after only two episodes and I could not wait to see what happened in the next episode. Fortunately the entire series has been uploaded to YouTube and I will post it below so that you can watch it.

Plot: 9.9/10- Although Death Note is a relatively short series only consisting of 37 episodes, the first 25 are masterpieces of suspense and intrigue. Most episodes are engaging at a psychological level because the viewer is trying to figure things out as the series goes along with all its shocking plot twists and turns. The concept, albeit it slightly ridiculous to some, was incredibly original and well paced. Death Note relies heavily on suspense and man is it suspenseful! There where moments when my heart was literally pounding due to the level tension waiting for what would happen next. Throughout the series there are times where the audience hears the thoughts of both Light and L trying to out match other, and it worked brilliantly to convey the battle wits between the characters. Both Light's and L's characters are well developed and surprisingly likeable. It is almost difficult to determine which of the two is the real protagonist, although Light is the true star of the series. Also the story contains themes of "Absolute power corrupts absolutely" because with the Death Note's power Light develops a "god complex" thinking himself as above humanity and therefore fit to rule mankind as he sees fit. Unfortunately, Death Note does not keep this stoke of brilliance throughout the entire series, after episode 26 the show starts to take a drop in quality. However, it is still an excellent show and I found it enjoyable since I was already invested in the characters.

Action: N/A- Other than a ton of death, there is not much action.


Acting: 9.9/10- Superb English dub all around for the series and all the lines translated well and never felt miss placed, except for a few text errors later in the series. Brad Swaile gives an excellent performance as Light/Kira, he voices the role perfectly. Alessandro Juliani as L was even better as a eccentric detective, being the real standout of the show. While some anime fans prefer the original Japanese dub, I highly recommend watching the English dub because the voice acting is fantastic.

Art Style: 10/10- Normally anime's style is off putting to me, however Death Note's animation was amazing. It seems that in most anime when characters are talking, only the mouths of the characters actually move, which I find odd, however Death Note's style seemed more fluid than others. Despite this, in typical anime fashion, there were a few scenes that over-the-top dramatic to the point where it was almost laughable, however those scenes worked surprising well.

Soundtrack: 10/10- The music ranged from epic orchestral music to detective investigating type themes, all of which is perfect for the series. The epic music makes seemingly mundane things feel epic. The opening theme in earlier episodes is quite good, even though I have no idea what it is saying, however the later episode's "Death Metal" opening is annoying. All it is garbled screaming! Fortunately, it is never used in the show.

Comedy: 6.8/10- While far from comedy, Matsudo, Misa, and L can quite humorous at times.


Overall: 9.8/10- Death Note is one of the most original and suspenseful televisions show I have ever seen, and the first anime series that I actually enjoyed throughout. It is smart and always keeps you guessing with many plot twists and turns.

Closing Comments: From someone who does not normally enjoy anime, I have to say that I recommend Death Note to anyone old enough that wants to watch some awesome and smart television. Even if you are not an anime fan or you have never been seen anime before, Death Note is a perfect place to start.

Next on my anime endeavor will be the popular Cowboy Bebop. If you also watch anime please recommend me some series to watch, preferably sci-fi or something along the lines of Death Note.

Below is the entire series uploaded to YouTube, except for episode 5, which you can watch part 1 here and part 2 here. Warning, the show is occasionally violent, although I never found any more violent than a PG-13 movie. 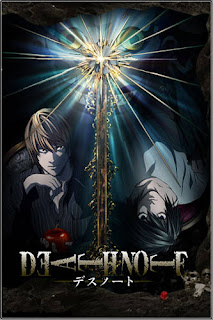 Posted by James the Reviewer at 7:02 AM