Harry Potter and the Prisoner of Azkaban Review.

Thoughts: Harry Potter and the Prisoner of Azkaban is considered by many to one of, if not the best of the Harry Potter series. While the Prisoner of Azkaban is a far better movie in quality compared to the previous movies and it was a much more mature movie. It was a little too dark for my tastes and the plot progression was a little slow. Also as a Christian there was one thing that I did not like. The performances in the Prisoner of Azkaban were really good and made the characters seem more believable. One thing I found very odd was that Hogwarts looked very different than previous movies and the placement of building and other things have changed drastically but there really was not much of a problem since it did look much better. The cinematography in the Prisoner of Azkaban is very good and the landscapes looked great. The special effects finally looked believable with some very well made effect shots. One of the main problems with the previous Harry Potter movies was his very annoying adopted family, which I mentioned in my other reviews, but their part was about 8 minutes in the movie, therefore that part was much better. There also a few unexpected plot twists and a slight mystery component, both of which worked well in the movie. The last 20 minutes of the movie were by far its best part but I will not spoil anything about that part of the plot. For some reason directly after watching the movie I did not like it a lot but after thinking about it I actually really enjoyed the movie. One of the most things about the Harry Potter movies thus far is the characters. Since many movie series stop at three movies their full character arc is shorten to fit into that time span. Yet, there are eight Harry Potter movies to build the characters and they are very likeable characters.

The Bad: A little too dark for my taste,


Plot: The following plot summery is copied from Wikipedia.com.

Harry Potter is at the Dursleys' for the summer, spending his time studying new spells undercover. When Uncle Vernon's sister, Marge, comes for a visit and infuriates Harry by insulting his parents, he accidentally causes her to inflate and fly away. Harry loses his temper and threatens to curse Vernon but flees, fed up with his life at Privet Drive. The Knight Bus appears and delivers Harry to the Leaky Cauldron, where Minister of Magic Cornelius Fudge tells him he will not be arrested. During the summer, his friends Ron Weasley and Hermione Granger go to the Leaky Cauldron too. Harry also learns that Sirius Black, a convicted supporter of Lord Voldemort, has escaped Azkaban prison and is likely intending to kill Harry.
Harry, Ron, and Hermione head back to school on the Hogwarts Express. They unknowingly share a compartment with the new Defense Against the Dark Arts teacher, Remus Lupin, who is sleeping. When the train abruptly stops, Dementors (the guards of Azkaban) board, searching for Black. Harry faints when one Dementor enters their compartment, but Lupin repels it with a charm, but before Harry faints, he hears a woman screaming. He asks who screamed, but they say no one screamed.
At Hogwarts, Albus Dumbledore informs students that the Dementors will be guarding the school while Black is at large. Professor Lupin is introduced, and Hagrid is announced as the new Care of Magical Creatures teacher. Lupin's lessons prove enjoyable; he focuses on practice, not just theory, and encourages less confident students such as Neville. However, Hagrid's first class goes awry when Draco Malfoy deliberately provokes the Hippogriff, Buckbeak, who then attacks him. Draco's father Lucius Malfoy has Buckbeak sentenced to death on court. Watch the movie to what happens next.

Plot: 8.2/10- The main idea for the plot was very good and the mystery part worked well, if the pacing was better it would have been a much better movie.

Action: 6.8/10- There actually a few action scenes in the Prisoner of Azkaban.

Acting: 8.4/10- The entire cast was much improved with Emma Watson, Daniel Radcliffe and Gary Oldman giving the best performances.

Special effects: 7.5/10- Although the movie was made in 2004 the effects are still decent today.

Soundtrack: 9.4/10- John Williams' soundtrack was even better than the previous movies.

Comedy: 7.0/10- There were a few humorous parts but some of the comedy fell flat.

Would I Watch This Again: If I become a fan of the other movies I would probably watch this again.

Overall: 8.1/10- Harry Potter and the Prisoner of Azkaban is large improvement over the previous installments and is a very good movie.


Closing comments: The Prisoner of Azkaban 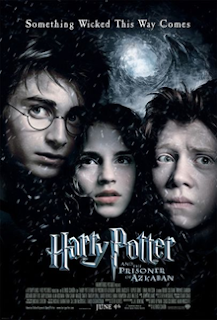 Posted by James the Reviewer at 6:55 AM