The Fellowship of the Ring Extend Edition Review.

As I said in my earlier post I bought The Lord of the Ring Extended Edition Blu-Ray. I will be reviewing each part of the Blu-Ray collection separately starting with the movies and then the special features. I watched The Lord of the Rings Extended Edition in consecutive days to get the full experience. If you have not seen The Lord of the Rings Trilogy you need to watch it! They are must see movies. The only reasons any could not like it is if: they have attention of a six year old kid (but my six year bother old loved it when he watched), or they are scared easily by the Orcs and other somewhat thing scary things.
Thoughts: I have seen The Fellowship of the Ring before when I borrowed it from a friend so watching it this time was not an new experience but it was still fantastic! As I said in earlier posts I love The Lord of the Rings movies. They are my favorite after Star Wars. There is 30 minutes of extended footage in this version and it does enhance experience. I doubt I will ever go back to watch the theatrical edition again. While the extra 30 minutes does not change The Fellowship of the Ring as much as the extra scenes change the other two Lord of the Rings movies, it does make The Fellowship of the Ring feels like a more complete movie. There are a few lose ends that are explained and some that are relevant in the next two movies. I have not read any of the Lord of the Rings books (sue me) I assume that some of the added were in the book but were cut from the theatrical version. There were a few entirely new scenes and many that were extended. The only thing I do not like about this Extended Edition was the extra in the special features is a very inappropriate MTV award parody. Do not watch it.  Also there was some humor that was added. There was also a lot more character development I would not recommend watching the Extend Editions for a first time viewing of the trilogy because the pace is slower except in The Return of the King and it might be boring to some viewers. But for Lord of the Rings fans it is perfect. My comments are highlighted in red below each description of the extra scenes that I think are worth noting.
The Fellowship of the Ring Extended Scenes
Isildur's death.
This better explains how the ring was lost much better than the original Prologue scene.

Bilbo's opening narration "Concerning Hobbits".
This scene told you more about the Hobbits and had some humor but was not as important to the story as some of the additions.


The Hobbits at the Green Dragon.
The humor in this scene was good.

Frodo and Sam seeing Wood Elves making their way to the Grey Havens on their first day of their journey across the Shire.

The crossing of the Midgewater.

Aragorn singing "The Lay of Lúthien".

Sam shows Frodo the trolls when they are at Trollshaws.
The trolls that will be included in the up coming Hobbit movie. This really conects the two movies well.

Gandalf reciting Black Speech at the Council of Elrond.

The Fellowship given a goodbye at Rivendell.

The Fellowship members have flashbacks from when they were given their gifts from Galadriel.
This is the scene that explains how The Felloship gained some of their weapons and equipment like the camouflage cloaks and Legolas' new bow.

Celeborn and Aragorn have a conversation in a flashback.

Since this is a review of the Blu-Ray and not the movie it's self I am judging mostly on the quality of the video and audio.
The Movie: 10/10- The Fellowship of the Ring is the near perfect movie one of the best movies ever made and Extend Edition makes it even better than the original. While I like the next two Lord of the Rings movies better this still ranks 7th on my all time favorite movies list.
Video: 9.8/10- The Fellowship of the Ring has never looked better in full 1080p HD. Some people have complained about some of the scene having a green tint but I did not see any.
Audio: 9.8/10- I do not have a surround sound system but Howard Shore's score sounded fantastic and the sound effects were also great.
Overall 10/10- This is a must buy for any Lord of the Rings fan. You can also buy this on DVD if you do not have a Blu-Ray player.
Come back here tomorrow for the review of The Two Towers Extend Edition. 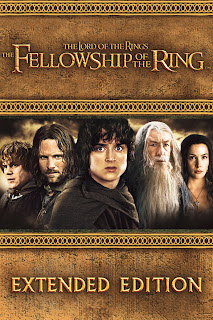 Posted by James the Reviewer at 6:22 AM