Thoughts: Steven had a lot riding on War Horse. Did it live up to the hype? Definitely not. It is one of the most disappointing movies of 2011. War Horse is not by any means a bad movie, it is just a decent movie. Some critics were claiming that it was an "Emotional Journey" but you never really cared what happened to the characters. The trailer was very misleading, it appears that the movie is about the boy and his horse and it makes it seem that Tom Hiddleston is actually in the movie more than 10 minutes. I assume that the movie can appeal to horse movie fans since they might correct to the horse character. After almost an hour about who you would think is the main character Albert Narracott and his horse Joey. War Horse starts out good and builds the story but soon as you almost start liking the character it switches to different characters, who are played by Tom Hiddleston (also known as Loki from Thor) and Benedict Cumberbatch (who play Sherlock in the recent TV series). They are two of my favorite actors but their part is only about 10, 15 minutes at the most. It was probably the best part of the movie but it was still not great. Around that point in the movie there was one good, yet short, battle scene. Only a few of characters are interesting and the acting is only average. The movie it's self is not boring but there is almost nothing in War Horse that makes it seem like anything special or original. Everything looked authentic and most of the cinematography was good, except the ending were it appeared really fake. This is not one of Steven Spielberg's best movies; it does not even seem like a Spielberg movie except the short battle scene. Also the characters are so one dimensional, they are almost like card board cut outs. The movie is said at the end of the movie to take place over a period of four years but the journey of Joey (the horse) appears only to over a period of one year at the most. There should have been something that indicated the change in time.

The Bad: Not focused enough, One dimensional characters, As soon as you begin to like the characters it switchs to another group of characters,


Note: This trailer is very misleading.

Plot: The following plot summery is copied from Wikipedia.com.
Note: In the following plot summery is contains the first 50 minutes compared to the usual 30 minutes I usually post.
In Devon, England 1912, a teenage boy named Albert Narracott (Jeremy Irvine) watches the birth of a thoroughbred foal and watches with admiration the growth of the young horse, galloping through the fields at his mother's side. Much to the dismay of his mother Rose (Emily Watson), his father Ted (Peter Mullan) buys the colt at auction, despite a friend pointing out a more suitable plough horse for his farm. Desiring to spite his landlord Mr Lyons (David Thewlis), and retain his pride, Ted bids higher and higher for the colt. The high cost of the horse (30 guineas) means he is unable to pay rent to Lyons, who threatens to take possession of the farm if the money is not paid by the autumn. Ted promises to meet the deadline, suggesting he could plough and plant a lower, rock-filled field with turnips. Albert names the horse Joey and devotes much time to training him. Albert's best friend, Andrew Easton (Matt Milne), watches as Albert teaches his colt many things, such as to come when he imitates the call of an owl by blowing through his cupped hands.
Ted, who has a bad leg from a war injury, is frequently shown drinking alcohol from a flask he carries. Rose shows Albert his father's medals from the Second Boer War in South Africa, where Ted served as a sergeant with the Imperial Yeomanry. Ted was severely wounded in action, and received the Distinguished Conduct Medal for bravery under fire. She gives Albert his father's regimental pennant, telling Albert that his father is not proud of what he did during the war, and that he had thrown the flag and medals away, though Rose saved and kept them hidden.
Albert trains Joey for the plough and, to his neighbours' astonishment, prepares a stony hillside field to plant with turnips. However a rainstorm destroys the turnip field, so to pay the overdue rent (and without telling Albert), Ted sells Joey to Captain James Nicholls (Tom Hiddleston), a young cavalry officer, as World War I breaks out. When Albert finds out, he confronts the officer and begs for him not to take the horse. Nicholls promises he will take care of Joey as his own horse and hopefully will return him after the war. Albert tries to enlist in the army, but is too young. Before the captain leaves with Joey, Albert ties his father's pennant to Joey's bridle. Watch the movie to what happens next.


Plot: 6.8/10- War Horse tried so hard to make you feel emotional it seemed really fake in many parts. The concept for the movie was decent but not executed well.


Action: 6.0/10- There were two short battle scenes in War Horse, both were made very well but they were far too short.

Acting: 6.8/10- The acting was not bad, it was just flat and stiff, like there were just reading dialogue.

Soundtrack: 8.5/10- While this is not one of John Willaims' best soundtracks it is very good.


Would I Watch This Again: There is nothing in War Horse that warnts a re-peat viewing.

Closing comments: If you really love horse movies you could become emotionally attached to the horse and actually like War Horse 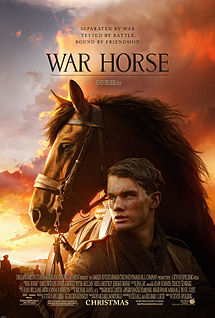