The Return of the King Extend Edition Review.

The Return of the King Extended Scenes.
Note: These are not in exact order and they are a few more scenes that were added that are not listed below.
The final confrontation between Gandalf and Saruman on Isengard; Saruman's staff breaks and he is stabbed in the back by Gríma Wormtongue, who is shot with an arrow by Legolas; Saruman falls from Orthanc and is impaled in a war machine. His palantír falls on the water and is found by Pippin.
I thought this was a very important scene that showed us the fate of Saruman. They never said what happened to him in the original cut ir were Gandalf found the Palantir.
The drinking game between Legolas and Gimli
This scene was hilarious. Legolas and Gimli are really funny together.
Sam threatening Gollum about Frodo on the secret stairs to Shelob's Lair.
Merry offering his services to King Theoden
This was just an extendison of the original scene.
Faramir and Pippin having a passionate conversation in Minas Tirith.
Another scene with Faramir that was cut. It also explained were Pippin got the small suit of armor.

Faramir telling Denethor that he would never use the One Ring (in a flashback on which Boromir appears).
More character deveolpment of Faramir.
Aragorn, Legolas and Gimli barely escaping from an avalanche of craniums when they are negotiating the alliance with the Dead.
Before this scene I thought that there were only extended scenes and not scenes that were completely changed but this scene changed what happened in the original.
Aragorn seeing the fleet of Corsairs ships.
This explains how Aragorn, Legolas, and Gimli obtained the boat that they traveled with the un-dead army.


The fighting between Gandalf and the Witch-king of Angmar in Minas Tirith.
In the original cut it never showed how Gandalf lost his staff and it should have been included, but I guess that is what this extended edition is for.


Faramir and Eowyn in the Houses of Healing
Another scene that shows what happened to Eowyn after her battle with the Witch King.
The march of Frodo and Sam between the orcs
Aragorn revealing the sword Anduril to Sauron in a palantír.
This explains how they got Sauron attention.
The Mouth of Sauron
This is probably my favorite scene that was added to the extended edition. I have seen The Mouth of Sauron in many Lord of the Rings vidoe games and wondered why he was not in the original cut.
Gollum and Frodo struggling on Mount Doom.
Fan End Credits
New song called "Bilbo's Song" added to the closing credits
The Movie: 10/10- This my favorite Lord of the Rings movie and fourth favorite movie overall after the four best Star Wars movies and the extended edition made it even better,

Video: 10/10- Wow! The Return of the King's video quality was amazing! The cinematography made it one of the best looking movies I have seen on Blu-Ray. It is worth getting just to watch on Blu-Ray.
Audio: 9.9/10- The sound was probably the best of the collection.
Overall 10/10- Overall The Return of the King Extended Edition is the best of the set.
I will review the special features after I get around to them. 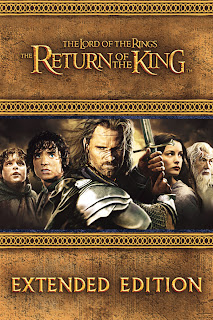