You voted for it, so here is the review for Cowboy Bebop, the only series that fills the void left by Firefly. Also, this is a continuation of my western reviews that started with The Good, the Bad and the Ugly yesterday.

Cowboy Bebop is often considered to be one of, if not, the best anime series ever created, does deserve such praise? 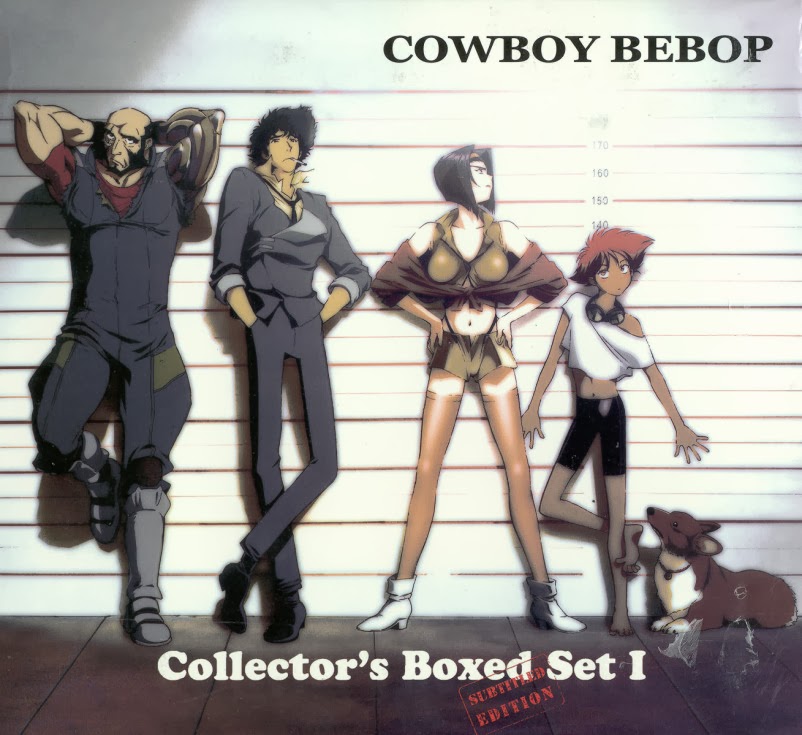 Cowboy Bebop follows a group of space bounty hunters, known as "Cowboys," in the future where humanity has expanded across the galaxy and terraformed planets to make them habitable. The ship that they travel on is called the Bebop, and it is similar to Serenity in Firefly in that it is often the focal point of the series. There are no aliens, and the future has not progressed a lot since modern day in terms of weapons, except for spaceships' laser weapons. As for the quality of the series, when Cowboy Bebop is good, it is positively brilliant, one of the best series ever; however, the series had a slow start and a few episodes where noticeably subpar.
About two years ago I tried watching the series because my favorite YouTube critic, Chris Stuckmann, recommended it, and after watching about four episodes I gave up the show because, at the time, anime was not my thing at the time. However, after watching Death Note, I decide to give Bebop another chance and it was more than worth it. Much of this review was written directly after watching the Cowboy Bebop series and since it was only the second anime series that I had ever watched to completion, my knowledge of the genre was very limited. Therefore, to update this review, I re-watched a few episodes with my substantially greater knowledge of the genre to correct some previous mistakes and add new insight to my original review.

Plot 9.5/10- Except for a few episodes that contain important backstory to the characters or the episodes that introduce the audience to a new member of the crew, Cowboy Bebop is a relatively non-serialized series. Most episodes have no bearing on the previous one, which, as I know now, is kind of odd for an anime. For American audiences familiar with the overused crime drama genre, this format should be familiar, and while I typically prefer my anime to be serialized, Bebop benefits from being episodic because each episode can bring something new. Some episodes are all kinds of absurd fun, while others are deep and reliant on character development. Due to the episodic nature of the series, several episodes are not very good. They are not terrible, but the first 4 and a few others like “Jupiter Jazz” and "Bohemian Rhapsody" do not hit the mark. On the other hand, “Cowboy Funk” and "Mushroom Samba" are a blast of fun, and "Hard Luck Woman" and "The Real Folk Blues" are freaking masterpieces! If watch the first several episodes and begin to lose interest, skip to the fifth episode, "Ballad of Fallen Angels," and if you dislike that, then Bebop may not be for you. Also, the series is light on romance with only some very minor aspects woven into the plot.

Characterization: 9.7/10- Cowboy Bebop has one of the most iconic cast of main characters in anime history. Some of the other side characters and villains are also fantastic. However, some of the very minor side characters are kind of dull and occasionally annoying, but other than those, the characters and characterization is nearly flawless. Now I will analyze each of the main characters.
Spike Spiegel: In a way, Spike is the star of the series because many of the main plot points revolve around the character. His background is mysterious and is revealed as the series continues. Spike has a fun cocky attitude and a humorous sarcastic wit, almost like Han Solo is a few respects.
Jet Black: Jet is the captain and the owner of the Bebop (the spaceship), and he is a former police officer. Although I do like Jet as a character, he often seemed to be the least interesting of the crew.

Faye Valentine: Faye is introduced in the third episode and eventually becomes part of the crew. She is a "femme fatale" type character and uses her assets to trick men to catch her targets. She is sassy and an all around fun character with a mystery past that is satisfying revealed throughout the series. It is a tossup between Faye and Spike for my favorite character in the series. Her character and what is revealed about her past is a key element of the series. Many of the episodes focusing on her are among the best.
Edward: Ed is an odd character. She is a kid and master hacker. Also she is an orphan, which is why she does not know her name and is named Edward after her hacker name. At first, I thought she was going to be the worst part of the franchise due to her crazy over-the-top character, and her ability to ignore physics. However, her character started to grow on me, and she actually ended up being one of my favorite characters in the series. She was the star of several of the best episodes.

Action: 9.4/10- Cowboy Bebop contain some of the better animated action on television, especially for the time. Many of the episodes feature a fun final battle. The action ranges from spaceship battles, to gunfights, to hand-to-hand combat, and all of which are choreographed excellently.
Art Style: 9.5/10- At first I did not like the animation style; it was a little too dated for my taste. However, I eventually did not mind it and actually liked it a lot. The entire style of the series is so unique and fun, it never ceases to impress me. Comparing the style to other 90s anime, there are really no equals. Also, the entire style of Bebop is amazing and uniquely noir that is entirely different than any other anime.

Voice Acting: 9.9/10- Cowboy Bebop’s dub is one of three series that you have to watch dubbed, even f you prefer subbed anime. It was a turning point in the medium of anime dubbing due to the fact that the actors actually took their roles seriously. While there had been some good dubs before and around the time of Bebop like Trigun, Bebop’s dub stands out among the rest. Legendary voice actor, Steven Blum, is a standout as Spike, giving the character great depth. While every actor of the main cast are virtually flawless, many of the background characters’ voices are mediocre and a few borderline bad, which is why the dub rating is not a 10/10.  On a side note, Bebop does have some fan-service here and there, mostly from Faye, but I liken the possible fan-service more to the typical content that you would see in a serious American drama on AMC or other similar networks rather than fan-service for the sake of fan-service.

Soundtrack: 9.9/10- Yoko Kanno's score has to be one of the most unique and varied soundtrack of anything for any work of fiction. Most episodes have a unique score all its own, which can range from jazz, funk, and even "The Good, the Bad, and the Ugly" western type themes. Since I am not a fan of jazz or blues, the soundtrack is not always the best to listen to it on its own, how the music was used in the series is entirely unique and often perfect. On a few rare occasions the music can be a little distracting, but other than that, the use of music is perfect.


Opening and Ending: 10/10- "I think it's time we blow this scene, get everybody and the stuff together... Okay, three, two, one, let's jam!" *cue theme music* In short, Cowboy Bebop’s opening theme is quite possibly the best opening theme ever; listen to it below! Baccano’s opening is probably my personal favorite; Bebop is an extremely close second and one that I listen to often. The ending theme is perfectly fitting for the series with a nice blues song named “The Real Folk Blues.” Just skip the first 13 seconds of the video below to watch the amazing classic opening.


Humor: 9.1/10- Many episodes contained some hilarious moments, and other episodes are virtually comedies, and effective ones at that. "Cowboy Funk" and "Mushroom Samba" are among the funniest episodes of the series with their absurd craziness. On the other hand, some episodes are intense and serious dramas without humor.

Overall: 9.5/10- Despite a slow start, Cowboy Bebop is the shining example of how tons of style and “the rule of cool” combined with unforgettable characters and stories can create a legendary series that has defined a generation of Otakus. Also, there is a fantastic Cowboy Bebop movie that I will be reviewing in the future.

Closing Comments: While not entirely perfect, Cowboy Bebop is the type of series that is far too important and influential not to watch if you are an anime fan. Seriously, if you watch one classic anime in your lifetime, Cowboy Bebop should be your first pick. As much as I enjoyed Evangelion, it is not for everyone, but Bebop most certainly is for everyone. There has to be at least one episode that you will enjoy due to the sheer variety that the series contains. For non-anime fans, Cowboy Bebop is not a bad place to start, since it was my second anime series, and while, at the time, I found some of it weird and occasionally off-putting, when Bebop is at its best, few shows can top it. In short, go watch Cowboy Bebop!

Below is the entire first episode in English dub.

For another review, you can read Arvin Saints' review Cowboy Bebop by clicking here. For yet another opinion, watch the review of the series by my favorite movie critic, Christ Stuckmann. It was this review that made me interested in watching Bebop in the first place. Also, ignore the thumbnail; that picture is never in the series and is just there to collect easy views.

Posted by James the Reviewer at 6:08 AM