Snow White and the Huntsman Review.

Thoughts: For reasons unknown to me, there was a lot of hype leading up to Snow White and the Huntsman. However, it seemed to disappoint about half of the critics resulting in a sub-par 49% rating on the Tomato Meter, on the other two of my favorite critics, Chris Stuckmann and Jeremy Jahns gave the movie positive reviews. While I did find the trailer slightly interesting, I never saw why everyone had such high hopes for the film but the Snow White and the Huntsman really surprised me, it was a great movie. Although I probably watched the old Disney "Snow White and Seven Dwarves" when I was very young, I have no memory of the original story and it all felt new and fresh. It is definitely not a "kid's movie" telling of the story with a dark and grim visual style, which had brilliant design. In some ways it almost reminded me of The Lord of the Rings, except more whimsical, yet still very dark. The tone was near humorless throughout most of the film but that worked surprisingly well, because it gave it a serious tone.

Snow White and the Huntsman is an action movie and it features a surprising amount of action throughout.  Chris Hemsworth (Thor), one of my favorite current actors, was awesome in the movie and easily the best, although he only comes in at the 30 minute mark of the film. Which leads me to the only problem I had with the movie, the first 30 minutes were similar to the prologue in the Lord of the Rings but it really dragged at least 10 minutes to long and prolonged the wait for Hemsworth's arrival in the movie. After the monetary success of the movie, I hope that more movies like this will be made.

The Bad: A little too exposition is the beginning,

Plot: The following plot summary is copied from Wikipedia.com.
Snow White is the Princess of Tabor, daughter of King Magnus and Queen Eleanor. After his wife's death, King Magnus marries the beautiful Ravenna after rescuing her from the Dark Army, an invading force of glass soldiers. Ravenna, who is in fact a powerful sorceress and the Dark Army's master, kills Magnus on their wedding night after noting that men like him exploit the beauty of women and discard them. As Ravenna usurps control of the entire kingdom, Duke Hammond escapes the castle with his son William, but is unable to rescue Snow White, who is captured by Ravenna's brother Finn. Snow White is then locked away in the north tower of the castle.
Tabor is left in ruins under Ravenna's rule as she periodically drains the youth from young women in order to maintain a spell once cast by her mother which allows her to keep her beauty. When Snow White comes of age, Ravenna learns from her Magic Mirror that Snow White is destined to destroy her unless Ravenna consumes the young girl's heart, which will make her immortal. Ravenna orders Finn to bring her Snow White, but she escapes into the Dark Forest, where Ravenna has no power. Eric the Huntsman, a widower who has survived the Dark Forest, is brought to Ravenna, who orders him to lead Finn in pursuit of Snow White. In exchange, she promises to revive his deceased wife, Sarah. Duke Hammond learns that Snow White is alive and has fled into the Dark Forest. William, Snow White's childhood friend, later infiltrates Finn's band as a bowman to find her
Watch the movie to see what happens next.

Plot: 8.0/10- Although the first 30 minutes were a little exposition heavy, after the Huntsman was introduced the pacing was much improved and I became really involved in the story. Considering what little I know of the original, there was a surprisingly small amount of romance, which was never the main focus of the story.

Action: 8.1/10- Surprisingly there was a significant amount of action throughout. During some points I was thinking that the film almost started to slow down and then it hit me with an action scene at the perfect time. It was mostly filmed well and did not over used too much shaky-cam. The special effects aided the action scenes and were not there just to have some action.

Acting: 7.6/10- Hemsworth was top notch and easily the best actor in the film. I have never seen any of the Twilight movies and I hopefully never will but I know they are awful and that Kristen Stewart is hated by many. But I actually liked her in the movie because she really pulled-off "The Fairest of Them All" excellently and believe that she was "The Fairest of Them All", despite some emotionless delivery. Charlize Theron as Queen Ravenna was very evil and played the role well overall but she was over the top during some scenes. Sam Spruell as Finn gave the noticeably weak performance of cast, he could have been a lot better. Of course the Dwarves were great, they added some fun humor to the movie and their introduction was not forced.

Special effects: 8.9/10- The film was a treat to look at with its fantastic visual design. It was difficult determine which parts of the set was CGI and what was real. The Dwarves were actually played by famous actors made to look small and it was not until I recognized a few of them as normal sized actors did I realize how well the effect was pulled-off. I never questioned for a minute that they were not short Dwarves.

Soundtrack: 7.6/10- Some of tracks were great and added a Lord of the Ring type tone to the movie.

Comedy: 6.9/10- While most of the humor comes from the Dwarves and Hemsworth, there is not a lot it but that was a not a detractor in anyway.

Would I Watch This Again: At some time I would consider watching it again.

Overall: 7.8/10- Overall Snow White and the Huntsman has a unique blend of "Fairy Tale" fantasy and dark serious tone, which results in an overall good movie, despite a few missteps.

Closing comments: Snow White and the Huntsman is one of the few good fantasy movies that has been made in recent years. 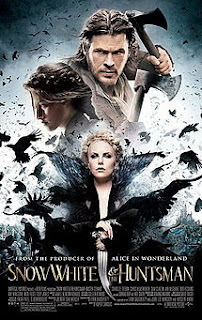 Posted by James the Reviewer at 7:46 AM