Lord of the Rings: Star Wars of My Generation.

Many films have been named the "Star Wars of Its Generation", and while Star Wars is my favorite franchise, the best of Star Wars was well before my time. However, Lord of the Rings is the definitive "Star Wars of My Generation". It was my "Must See" film and still remains the best film that I have ever seen in theaters and one of the main reasons that I started an interest in movies. Although the Star Wars prequels were around the same time, The Lord of the Rings was far superior, at least until Revenge of the Sith. Lord of the Rings brought back the classic Star Wars trilogy like format and legitimized fantasy as a serious genre for the first time. With The Return of the King, Peter Jackson not only managed to make the first fantasy film to win an Oscar for Best Picture, it tied records for most wins and notations. It proved that an action, special effects, fantasy movie that set box office records could win an Oscar, no small feat considering the ridiculous choices often made by the Academy. While The Lord of the Rings has yet to match or even reach the main stream popularity of Star Wars, no film or films of the 21st Century are a match for The Lord of the Rings. Other film such as The Avengers, Harry Potter and The Matrix, have been named the Star Wars of their respective generations with good reason but no franchise has ever truly reached the heights that Star Wars achieved in 1977 and it may never happen again. Hopefully The Hobbit will be the "Star Wars of This Generation". What do you consider the “Star Wars of Your Generation”? Please comment below. 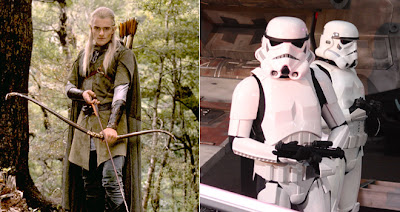 Posted by James the Reviewer at 6:56 AM