Here is part two of The Lord of the Rings: The Two Towers Book Vs Movie analysis. Although I found many changes from the book to movie in the Fellowship of the Ring unnecessary, many of the changes in the Two Towers I found to almost be better in the movie or just not really negative. This part is mostly about the Battle of Helm's Deep and obviously has complete spoilers for the movie. 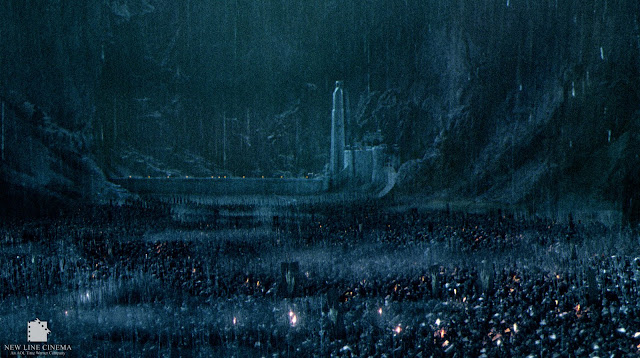 I found the chapter "Helm's Deep" to be a little difficult to follow, not exactly sure why, however for this post I revisited the chapter to grasp a better understanding of it. There are many changes from the book to movie in this chapter, however most of the changes really did not have a negative effect on the story and some changes actually improved it. Because there were a good deal of changes I have made some sub-categories to talk about.
Rohirrim Arrive Before Orcs
In the book, Saruman's army are hot-on-the-heels of the Rohirrim heading into Helm's Deep. However, the Rohirrim arrive﻿ well before the Orcs, which serves to give a build-up to the big fight. This is another good change because it gives weight to the battle and builds anticipation.
Elves at Helm's Deep
Before the battle of Helm's Deep an army of Elven archers from Lothlórien arrives to help the Rohirrim in the movie. Conversely there were no Elves at Helm's Deep, or at least there were no more than three including Legolas but not a small army. I have to admit it was a very cool scene in the movie when the Elves arrived to help Rohirrim and the way they were used in the battle was inventive. However, there might be a slight geographical problem of the Elves actually making the journey to Helms Deep in time. Since I am no expert in Middle Earth geoaphy I am not certin if this is the case.
You'll Have to Toss Me
﻿
Although some might dislike this scene because nothing that resembles it in the book, I really do not care. It was awesome scene! "You'll have to toss me", "I cannot jump the distance you'll have to toss me." It was a brilliant use of comic relief, probably the best change made by Peter Jackson.
Erkenbrand Not Eomer Arrives
In a way this also relates to the previous chapter "The King of the Golden Hall" in that Eomer was arrested not banished. Since Eomer is more of an important character than Erkenbrand, and he had basically nothing to do at the Battle of Helm's Deep in the book, it does make sense why he replaced Erkenbrand so that the audience would know who the person with Gandalf was other than some random Rohirrim soldier.


Orc Shot First﻿
One of the Rohirrim shot first at the battle in the movie, while the Orcs shot fight first in the book. Surprised there have not been "Orc Shot First" shirts like the "Han Shot First" ones. (this was just a joke).﻿
If you want to contact us or have any question please send an e-mail to johnstarslayer@gmail.com.

Posted by James the Reviewer at 6:49 AM